Florida State University achieved at the highest levels in 2019, bolstered by its academic and research excellence, its strong commitment to student success and a robust culture of entrepreneurship and innovation.

The university jumped eight spots in the U.S. News & World Report rankings, posted the best four-year graduation rate in the state, became the only institution with a stand-alone college of entrepreneurship and set records for research funding.

Florida’s best graduation rate
More Florida State University students than ever are graduating in four years, but the university’s upward trajectory in student success hasn’t happened overnight. As a result of careful and strategic investments over the past two decades, Florida State’s four-year graduation rate is No. 1 in the state of Florida and among the nation’s Top 10. 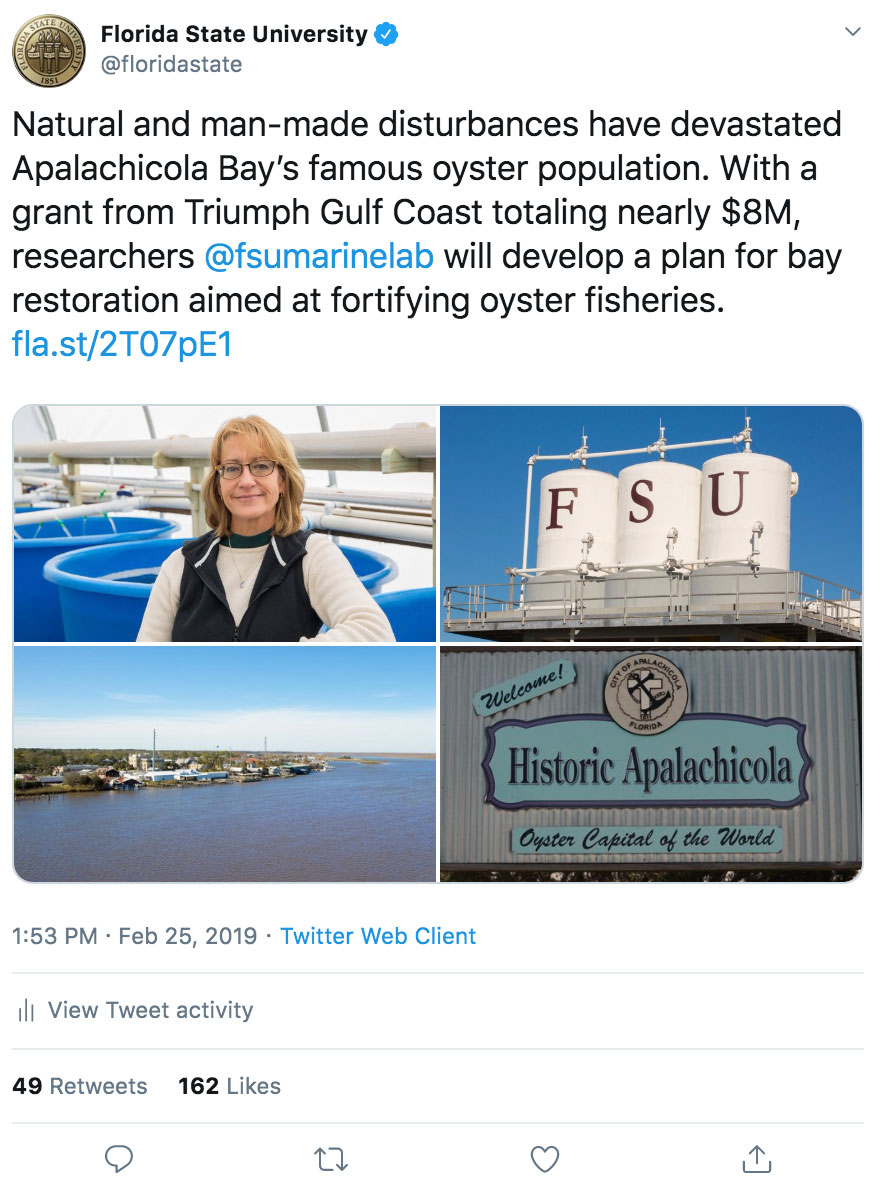 Florida State welcomes largest freshman class
More than 7,100 first-year students enrolled at Florida State University this summer and fall, making it the largest freshman class in university history. That follows a record-breaking 60,555 first-year student applications for admission to the 2019 summer and fall semesters — a 20 percent increase over 2018. Graduate enrollment also is at an all-time high after FSU received more than 10,000 graduate school applications. 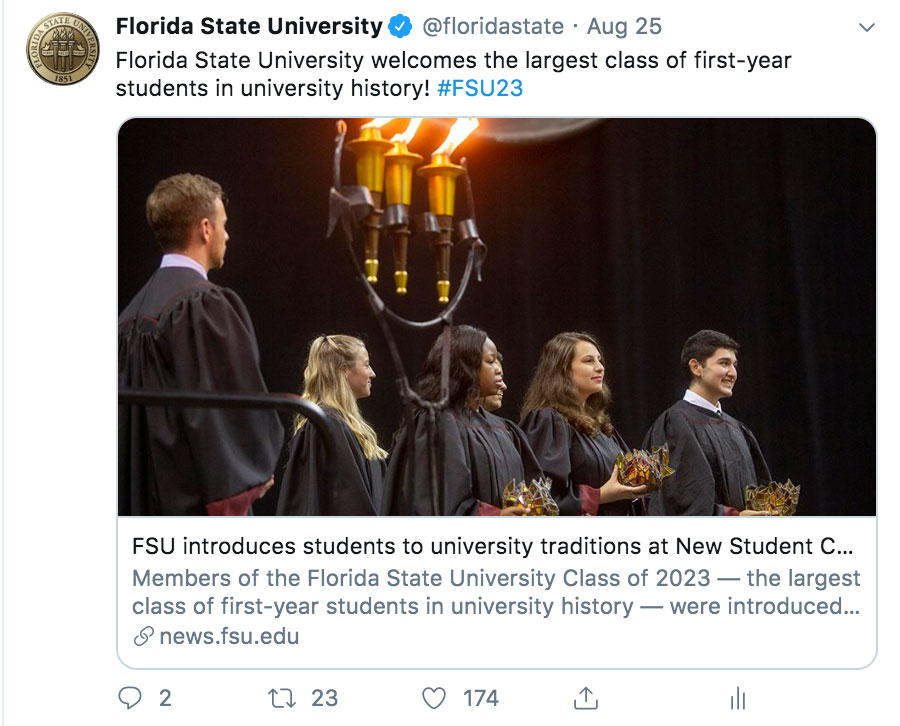 College of Medicine opens new primary care facility
FSU PrimaryHealth saw its first patients in May in its brand-new facility in southwest Tallahassee, an area that formerly had limited access to primary care. Patients throughout Leon County as well as surrounding counties are welcome. All care is provided by board-certified faculty members of the College of Medicine.

Arts programs receive national recognition
FSU has long been known for its excellent arts programs, and in 2019 several were ranked among the best of the best. The FSU School of Dance Maggie Allesee Choreography Center was ranked No. 6 on the list of The 10 Best Schools for Dance and No. 4 for The 10 Best Schools for Aspiring Choreographers.  The College of Motion Picture Arts received a No. 13 ranking by Hollywood reporter and The Wrap News. And the Department of Interior Architecture and Design climbed in national rankings by DesignIntelligence, which ranked FSU’s program No. 5 nationally and No. 2 among public universities.

Legendary baseball coach Mike Martin makes one last run
Mike Martin finished off his remarkable 40-year career by taking his 17th team to the College World Series in June. Martin owns the record for the most victories of any college coach in any sport with 2,029 wins. 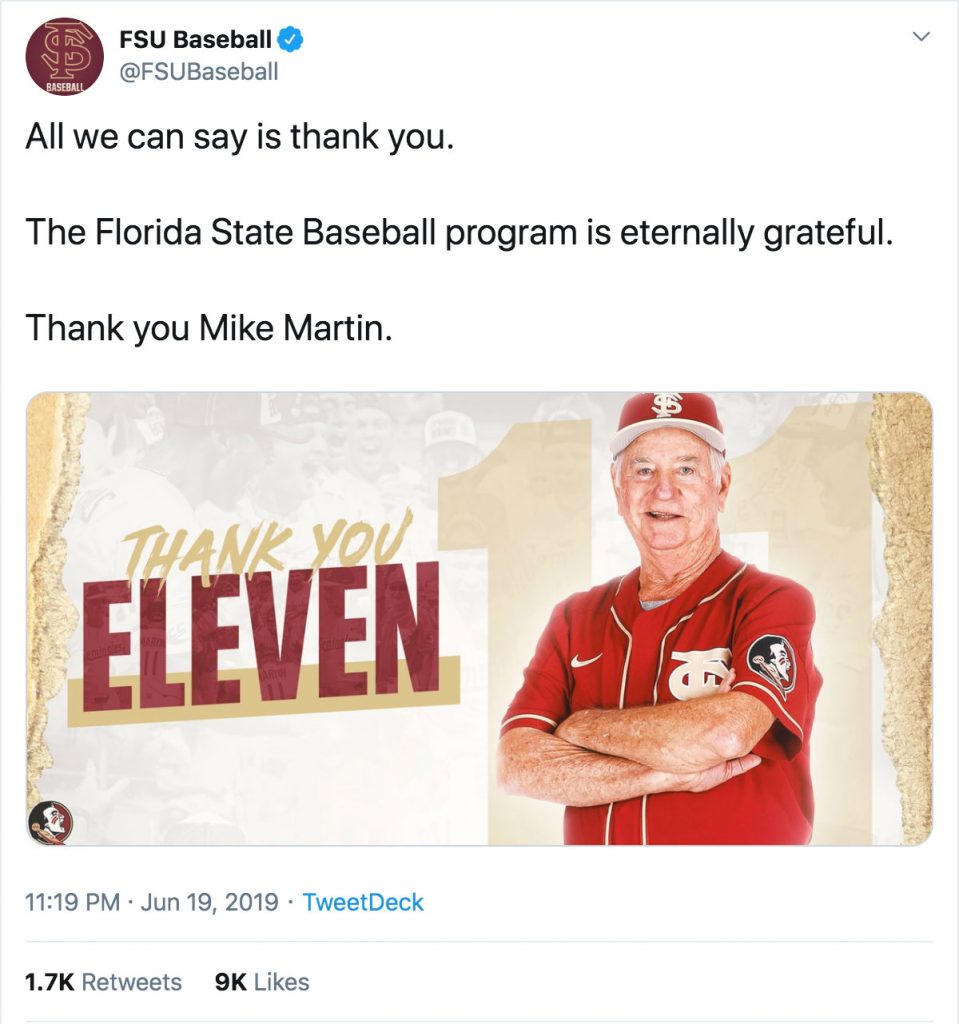