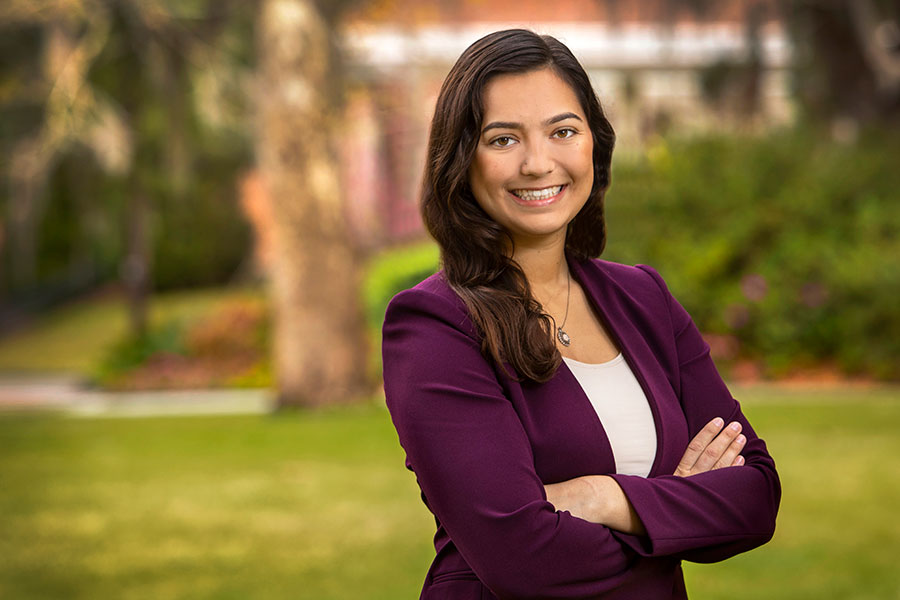 “Without the opportunities that FSU has provided me, I would not have been able to grow personally and professionally in all of the ways that I have.”

Senior Jennifer Magi arrived at Florida State University not knowing the impact she would have on and off campus by the time she graduated.

“I chose to attend FSU for the community and the ability to do undergraduate research,” Magi said. “The knowledge that I could participate in research early on because of FSU’s Undergraduate Research Opportunity Program (UROP) was a huge appeal to me.”

Magi quickly got involved in UROP, working as a research assistant in the Department of Earth, Ocean & Atmospheric Sciences and then doing a Directed Individual Study the following year.

Her academic career was off to a great start, but then Magi’s life was suddenly changed during the fall of her sophomore year when she received news that her father had developed leukemia. After being tested, her family discovered none of them were perfect DNA matches and not eligible donors for a bone marrow transplant. Her father would have to rely on finding a random donor, and miraculously, after only three months of waiting, he was notified that a perfect marrow match was found.

Throughout this process, her family discovered Gift of Life, a global bone marrow and stem cell registry with a mission to fight blood cancer by increasing the number of donors worldwide.

Seeing the effect this experience had on her family, Magi decided to bring Gift of Life to FSU’s campus. She started off as a one-woman team tabling at events throughout campus. Soon, she joined Gift of Life’s Campus Ambassadors Program and rallied a group of friends who showed interest in her work. The following fall, Gift of Life became a registered student organization on campus.

“You want to do something when you can’t do anything,” Magi said. “I couldn’t do anything directly to help my dad get better, but Gift of Life gave me a way to feel like I was in some way.”

The club has grown exponentially with its aim to spread awareness across campus about how a simple cheek swab could save a life. Since its inception, Gift of Life at FSU has signed up more than 2,000 donors, six of whom were perfect DNA matches to people suffering from a blood disease or blood disorder.

“That’s six new people who may not have had a match before,” Magi said. “Through Gift of Life, you can directly save a life. We are working hard locally to spread awareness, while also making an impact globally by finding DNA matches.”

Magi said her motivation behind the cause is even more personal.

“For me, the impact we have is different because I know what it’s like to be on the receiving end,” she said. “Every single patient match has a story. It could be someone’s infant, someone’s grandpa or someone’s dad.”

As a senior, Magi is now equipping the next generation of students on FSU’s campus to run Gift of Life and to continue the fight against blood cancer.

In addition to her work with Gift of Life, Magi individually fundraised $1,000 for the Children’s Miracle Network through Dance Marathon. At the same time, she joined Hall Council in Rogers Hall, where she discovered her passion for serving other students. The next year she joined Class Council, serving her sophomore and then junior class within FSU’s Student Government Association. Magi also served as a Resident Assistant (RA) with University Housing in Salley Hall for two years.

“I chose to pursue these positions because I wanted to serve others and spread my love for FSU,” Magi said. “You can make a big difference in these positions.”

Magi said that being a part of Gift of Life and serving as an RA have been her most influential experiences thus far.

“Gift of Life allows me to save lives; but RAs are superheroes too,” she said. “The direct ability to help people through those two experiences made them the most impactful to me.”

Magi was recognized for all of her hard work when she received the President’s Undergraduate Humanitarian of the Year Award for the FAMU-FSU College of Engineering, a prestigious award that recognizes students who exhibit tremendous commitment to service.

“That was the moment I realized the impact I was having,” she said.

Magi plans to continue to help people through her major in civil and environmental engineering. She intends to use the skills she acquires at FSU and apply them to solving environmental problems around the world.

Currently, Magi is on an all-female team working on their senior design project for the Northwest Florida Water Management District. The team is redesigning Cypress Spring, a popular spring near Vernon, Florida, that is being polluted by stormwater and eroded by civilian use.

“Jennifer’s academic record is stellar, but then you meet her and realize just how very special she is,” Rambo-Roddenberry said. “She is truly a joy to others and has a unique ability to bring out the best in people. We at the FAMU-FSU College of Engineering are big fans of Jennifer. Her strong work ethic enables her to excel academically as well as lead and serve. Her big heart and desire to help others are contagious.”

Magi is also the founder of the FSU Beach Volleyball Club, which she started around the same time as Gift of Life. She also competed for the FSU Rowing Team for two years, she serves as the Vice President of the American Society of Civil Engineers and she is a member of the Society of Women Engineers and the Florida Water Environmental Association.

Magi knows that all of this would not have been possible without help from Florida State.

“Without the opportunities that FSU has provided me, I would not have been able to grow personally and professionally in all of the ways that I have,” Magi said. “It’s all thanks to the amazing support I have received from faculty and through resources on campus.”

After graduation, Magi plans to give back in any way she can by pursuing a humanitarian career path, working as an engineer to protect the environment and the communities that depend on it.