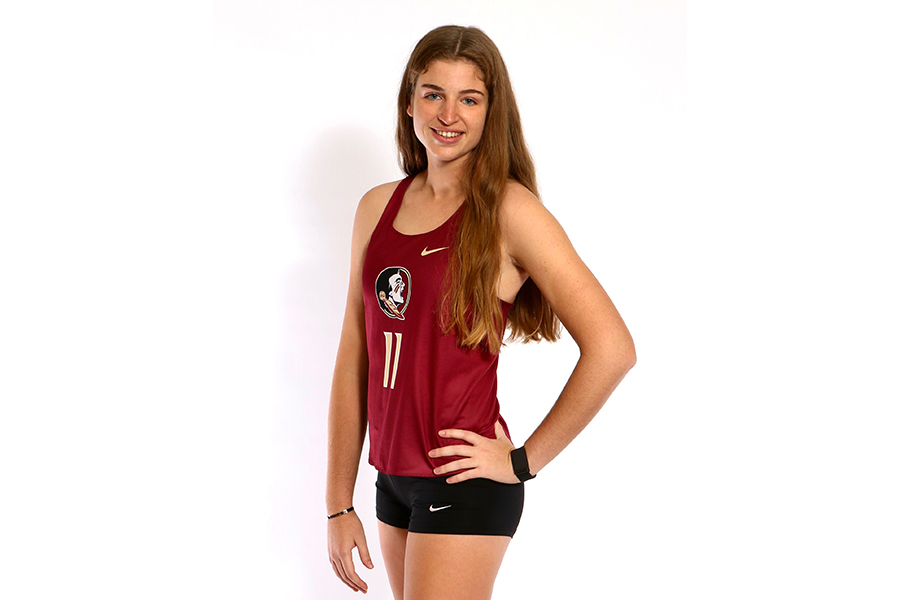 “I am so grateful to Florida State University for all the opportunities I’ve been a part of because it’s honestly been so much better than I could have ever imagined – and I imagined it would be pretty great. ”

Erin Murphy has made sure to seize every opportunity that has come her way at Florida State University.

A native of St. Petersburg, Fla., she came to FSU after graduating from St. Petersburg Collegiate High School as a salutatorian and with an associate’s degree in hand.

Murphy initially chose to attend FSU after being recruited to play Division I beach volleyball. She was impressed with the program’s resources and emphasis on the value of hard work. During her senior year of high school, Murphy also applied for FSU’s Honors Program and was later invited to attend the Presidential Scholars interview weekend.

“I had never heard of the Presidential Scholars Program, but during interview weekend, I was shown the full range of academic and overall resources that Florida State University has to offer,” she said. “That just blew me away.”

The Presidential Scholars Award is the premier undergraduate merit scholarship at Florida State University. The program provides four years of support and is open to high school seniors who are admitted into the FSU Honors Program. Murphy is the first student-athlete to be selected as a Presidential Scholar.

“I actually think the two complement each other really well,” she said. “The way I look at it is that those two programs have provided so much structure and two great support groups. It’s just incredible because I have this balance that’s built into my daily life.”

As both a Presidential Scholar and student-athlete, Murphy has shown a commitment to giving back to the local community. The FSU beach volleyball team was awarded the 2020 Director’s Cup for Service, an FSU award based on the average hours per student-athlete. The team completed a total of 31 hours-per-player for a total of 684 hours.

Murphy has taken a lead role in the team’s service commitment.

Research also has been a significant part of Murphy’s experience at FSU. Through the Undergraduate Research Opportunity Program (UROP) she was introduced to how research is conducted and partnered with research mentor, Jonathan Adams in the College of Communication and Information.

Murphy worked with Adams’ research team on successfully training the “You Only Look Once” (YOLO) object detection software from an aerial drone perspective. This project introduced Murphy to the research group she still works with today and whom she describes as some of her closest friends.

“I’ve learned so much from my research team,” she said. “They deserve a lot of credit for the work they produce, but also for how they push me to be a better researcher and a better person.”

The research team applied for an IDEA Grant which they received last summer. The grant was intended to aid the team in purchasing a drone so they would be able to test the software in real world conditions, monitoring sea turtles and marine life along beaches.

“Due to the COVID-19 pandemic, our plans changed and now we are focusing on using synthetic visual data or using software imaging techniques to modify or create images we want to train YOLO to detect,” Murphy said. “This research is innovative as it utilizes coding to create various versions of the same image to train the software, rather than collecting images and labeling them in the software manually.”

The team recently presented at the National Collegiate Research Conference at Harvard and is looking forward to presenting virtually at an IEEE Conference in Japan.

“The IDEA Grant not only helped us achieve our project goals financially but also supported our research by raising it to a level where we could be accepted to significant conferences,” Murphy said.

Murphy still has two more years remaining as an undergraduate at FSU and hopes to stay for graduate school.

Last year, due to COVID-19 disruptions, all NCAA athletes received an additional year of eligibility. Murphy plans to use FSU’s 4+1 program to start taking electrical engineering graduate coursework while she completes her computer engineering undergraduate degree. She hopes to use all five years of her NCAA eligibility and earn her master’s degree while still playing for FSU’s beach volleyball team.

“What I will remember most about FSU are the little things,” she said. “My first week at FSU is when I met my teammates and fellow Presidential Scholars for the first time, I saw the first glimpse of what my life would look like for the next four years.”

After completing her coursework, Murphy hopes to work in corporate America and eventually become a professor, like her mother. Next summer, she will intern with Jabil, a custom electronics manufacturing company in her hometown of St. Petersburg, and she hopes the opportunity will help her better determine what role she wants to play in corporate America.

“I really believe that without all the opportunities FSU has provided me with, I would not have been offered my top choice internship as a sophomore,” Murphy said.

While COVID-19 has affected her college career academically and athletically, Murphy said it has made her slow down and appreciate the everyday things we often take for granted.

“I’ve put more focus on enjoying everything that I do and not being so in my head about what’s coming next or what I’m working towards because nothing is really guaranteed,” she said.