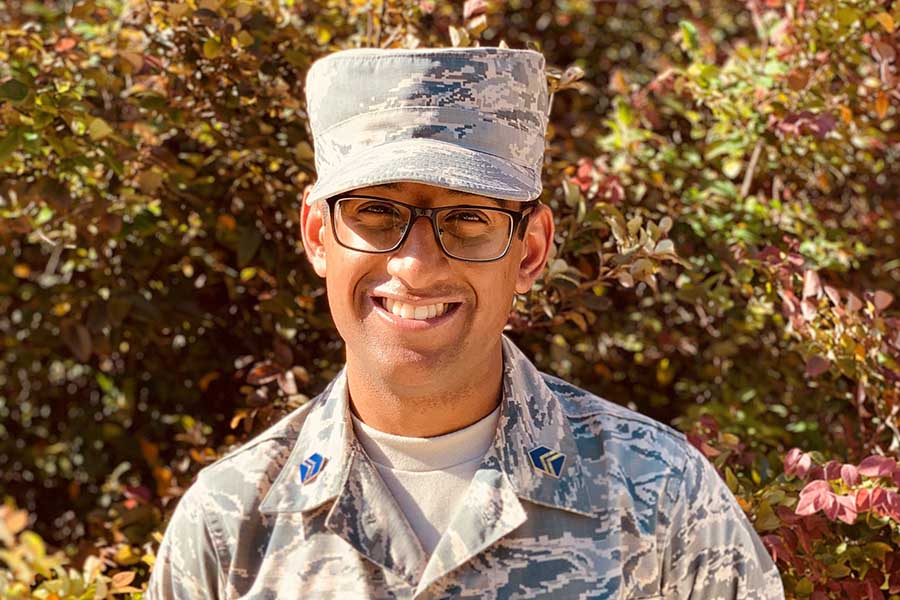 “FSU has not only given me the opportunity to change my own life, but also the lives of others.”

Ankit Patel came to Florida State University expecting to follow the typical pre-medical school path but soon found many unexpected and new interests along the way that would drive his career goals toward the future.

Patel was drawn to FSU because of the beautiful campus, friendly people and research opportunities for undergraduate students. Entering as a pre-med student, he appreciated the community-oriented goals found in various aspects of student organizations.

“There were ways for me to help those who don’t have the best position in society through primary medical care, which is something I was really interested in,” Patel said.

After learning about the more than 750 recognized student organizations (RSOs) at FSU, he was eager to get involved on campus. He joined Alpha Epsilon Delta, a pre-health honor society that offers opportunities for personal, intellectual and professional development through events like community service, MCAT preparation and guest speakers.

Patel earned more than double the required points to be inducted into Alpha Epsilon Delta and was awarded a scholarship when inducted as a member. He went on to become treasurer of the organization.

He also joined a research lab during the spring of his freshman year, where he synthesized nanoparticles to map cellular structure and function through dye quenching, using a model called nanometer surface energy transfer (NSET).

As he progressed through his first-year coursework, Patel found that, despite making the dean’s list, he wasn’t enjoying or interested in his pre-med classes like he had anticipated.

To decide if pre-med was still the area he wanted to pursue, Patel enrolled in an emergency medical technician (EMT-B) course during the summer before his sophomore year. While he did receive his emergency medical responder certification in this course, he said the experience also allowed him to realize he wanted to change his career path.

“The undergraduate research I became involved with really motivated me to do something I’m passionate about and pursue research that developed and improved certain aspects of daily life,” Patel said. “I discovered I was more interested in the physical aspect of chemistry than its biological counterpart. So, I decided to change my path — and that’s more than OK.”

Patel changed his major from biochemistry to chemistry, and later even added a second major in applied/computational mathematics. Following his sophomore year, he decided to join FSU’s Air Force ROTC program (AFROTC) to explore the idea of later conducting research in the Air Force.

“I was atypical – most cadets join the program as a freshman or sophomore and I joined as a junior,” he said. “But, as soon as I joined, I loved the program and I loved the people. They were very disciplined and team-oriented which was something that really resonated with me.”

Following field training, he was one of the few cadets to earn the Commander’s Scholarship, a full tuition and book stipend in recognition of hard work and top academics within the program. He was also recognized as GMC Cadet of the Semester in Spring 2019.

Still interested in serving his community, he joined the organization Life Enrichment and Discovery (LEAD) where he traveled to local schools in underserved communities and gave presentations to classes of elementary and middle school students with interactive scientific demonstrations in order to interest them in the STEM fields.

Patel also became a tutor at the Academic Center for Excellence (ACE), where for three years he provided free peer tutoring in the typical math and chemistry classes underclassmen often encounter. For his service, he was awarded the Torch Award for Outstanding Customer Service Excellence on behalf of ACE as part of FSU’s Student Employee of the Year Awards.

During the spring semester of his junior year, Patel conducted research at FSU’s Mag Lab where he synthesized quantum magnets with geometric frustration. By configuring these frustrated magnets to order, they may be utilized practically in areas such as microelectronics or drug delivery within the body.

Patel continued conducting research in the Mag Lab during his senior year, where he synthesized tunnel junctions to study quantum materials using planar tunneling spectroscopy (PTS). This research merged his interests in the areas of materials development and environmental conservation.

Patel is optimistic and focused on his career goals. By completing graduate coursework during his senior year, he discovered he would rather pursue a J.M. in Environmental Law and Land Use, which he will start coursework for in August. Following the completion of his J.M., he plans to enroll in the Air Force Institute of Technology where his goal is to earn a Ph.D. in Material Science and Engineering.

His goal is to work in research and development in a government laboratory, where he can make an impact developing materials for better energy conservation and storage. Patel then hopes to work with the U.S. Department of Energy and Department of Defense to try and develop new, environmentally conservative laws and policies and encourage people to use alternative energy and be more mindful with how they view the environment.

“My time at FSU showed me that the ideas I came to college with weren’t what I ended up being passionate about,” he said. “My experiences over the last four years have shown me that research and development, policy, and environmental sustainability are interests I’m really passionate about.”

Patel encouraged other FSU students to get involved on campus.

“Each of those little opportunities add up slowly to better develop you as an individual and can help you get to where you want to be – whatever that may be in life,” he said.