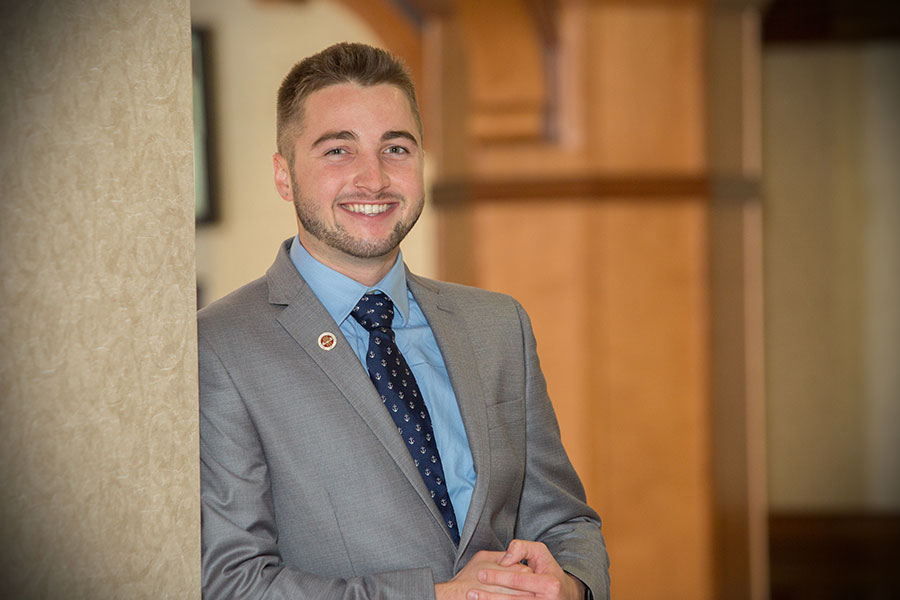 “The resources I’ve been provided through Florida State have been instrumental in shaping me as a confident leader and educator in marine conservation.”

Senior Eli Myron is turning his long-time hobby of scuba diving into a career through the research opportunities he’s experienced at Florida State University.

“The resources I’ve been provided through Florida State have been instrumental in shaping me as a confident leader and educator in marine conservation,” he said.

Myron, a Jacksonville native, arrived at FSU with plans of majoring in environmental engineering, but an immersive internship changed the trajectory of his studies and future career.

An adventurous spirit, Myron took an internship as a marine conservationist at the Whale Shark and Oceanic Research Center on the island of Utila along the Caribbean coast of Honduras. It was here that he discovered his love for coral reefs.

“That internship changed my life,” he said, reminiscing about his time on the island. “It was the most resonating experience I’ve ever had. Every day felt like the next greatest day ever.”

On the island, Myron learned about and observed the causes of declining oceanic health, such as coral disease, coral bleaching, the shark industry and global warming.

“We would learn about it, and then dive on the reef to see those effects firsthand,” Myron said. “By the end of the summer, I was left with a passionate drive to create change in island communities like Utila throughout the world.”

His newfound interest in coral reef restoration prompted Myron to switch to a double major in biology and environment and society.

An avid scuba diver since age 13, Myron gained significant scuba diving experience in Utila where he dove at least every other day. While he received his junior open-water certification as a teenager, Myron wanted to advance his training and took FSU’s rigorous Scientific Diving Course during spring 2019.

“It was an intense course,” Myron said. “We dove for a day-and-a-half almost every week for an entire semester. I am such a confident diver now because of it.”

His love of marine science brought Myron to the FSU Coastal and Marine Lab (FSUCML), where he met doctoral candidate Brian Moe, who he assisted in conducting deep-sea shark research.

“This experience was incredible, but it helped me realize how much I valued working with tropical marine ecosystems,” Myron said.

During his junior year, Myron was determined to dive into coral reef restoration research. He soon became affiliated with Sandra Brooke, a coral ecologist at the FSUCML. With her assistance, he developed an honors thesis proposal that explored the effects of coastal development on coral reefs along the northern Gulf of Mexico.

Myron received an IDEA Grant for the proposal and went on to conduct his research over the summer on artificial reefs in the St. Mark’s Marine Sanctuary.

In October 2019, he presented his findings at the President’s Showcase for Undergraduate Research. In the spring, Myron will defend his thesis, “Understanding the Role of Underwater Architecture in a Coastal Ecosystem: How do the physical characteristics of man-made structures influence benthic communities?” He hopes to publish the paper.

“Eli is an exemplary student, as his academic record clearly shows,” Brooke said. “But he also has a strong work ethic and an insatiable curiosity about the natural world. These qualities will serve him well in his future research endeavors.”

As a scientific diver for the FSUCML, Myron recently began working with the Organization for Artificial Reefs (OAR). He assists in artificial reef monitoring projects in the northern Gulf of Mexico and surveys potential sites for artificial reef placements.

Myron also serves as the Dive Safety Officer for the FSU SCUBA Club, creating and leading their dives. Next semester, he will intern for the Academic Diving Program at FSU.

In addition to diving, Myron is involved in activities across campus. He held the philanthropy chair for the Pre-Veterinary Club during his junior year, raising $2,000 for the endangered Florida Panther. He also helped found the FSU Beach Volleyball Club. In addition, he is a Campus Ambassador for the Gift of Life Marrow Registry, giving presentations and raising awareness for the marrow registry around the Tallahassee community.

Since his junior year, Myron has been involved with the Academic Center for Excellence Peer Assisted Study Session (PASS) program as a supplemental instructor for biology. As a PASS leader, he facilitates group tutoring sessions twice each week on various topics in biology.

“PASS has been my greatest leadership experience without a doubt,” he said. “Students come to me with questions and see me as a mentor. It has really helped me be comfortable with public speaking and understand that it’s okay to not have all the answers.”

Following graduation, Myron intends study the role of giant clam restocking programs on local degraded reefs for a Fulbright project in the Philippines. He then plans to pursue his doctorate and continue his research on coral reef restoration in the Gulf of Mexico and Caribbean Sea.