In a year defined by triumph and transition, Florida State University welcomed its 16th president, said goodbye to a legendary football coach and returned to normal operations after months of disruption due to the COVID-19 pandemic in 2021.

Florida State continued its impressive run as a Top 20 national university, posted a state record graduation rate and brought in numerous grants, awards and recognitions that help continue to elevate the university’s profile as a leading national research institution.

The Florida State University Board of Trustees unanimously selected Richard McCullough to serve as the university’s 16th president in June. His first day on the job was Aug. 16. McCullough came to FSU from Harvard University, where he served as vice provost for research and professor of materials science and engineering. He previously spent 22 years at Carnegie-Mellon University in Pittsburgh, where he began his academic career as an assistant professor of chemistry in 1990.

After seven years as president of Florida State University, John Thrasher stepped down from his post in August. As FSU’s 15th president, Thrasher elevated FSU’s reputation as a preeminent research institution and led the university to recognition as a Top 20 public university in the nation. In addition, he presided over a $1 billion fundraising campaign, advanced the university’s academic and research mission, championed diversity and inclusion, and welcomed the best and brightest students in the university’s history. Thrasher’s bold vision guided FSU’s path of unprecedented academic excellence, and the university community leaned on his strong leadership in times of celebration and crisis. He and FSU First Lady Jean Thrasher served the university with kindness, compassion and warmth.

Florida State Ranks Among the Best Universities in the Nation

For the third consecutive year, Florida State University placed among the Top 20 national public universities in the U.S. News & World Report rankings, which appear in the publication’s “Best Colleges 2022” guidebook. U.S. News also recognized Florida State for providing a quality education at an affordable price, ranking FSU the No. 5 Best Value College in the nation among public universities. 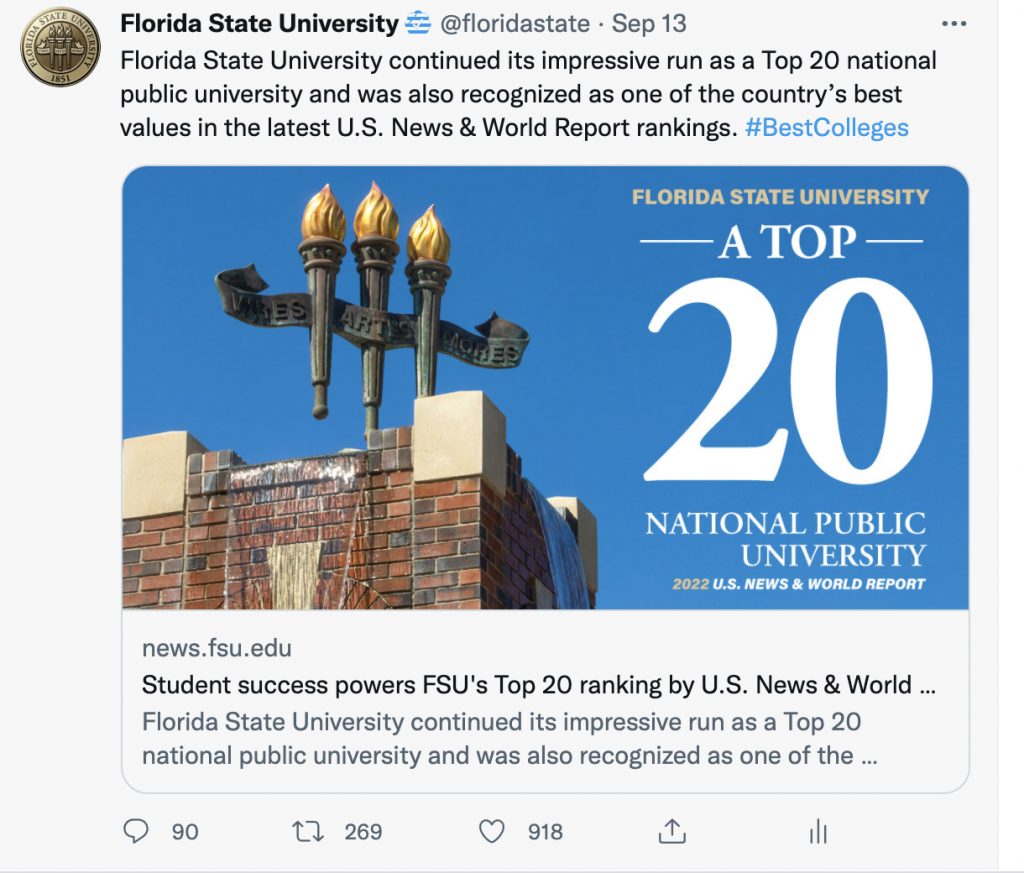 Bobby Bowden, who put Florida State football on the map and built the Seminoles into an unparalleled college football powerhouse, died peacefully in the company of family and loved ones in August. During his 44-year career, Bowden won 377 games. He also led the Seminoles to national championships in 1993 and 1999 and 12 Atlantic Coast Conference titles. Bowden’s impact on the football field is matched only by the impact he made outside the game. He was known as a devout Christian with a quick wit, gracious demeanor and compassionate approach to his players and foes alike.

Jawole Willa Jo Zollar, a professor at FSU’s School of Dance and founder of Urban Bush Women (UBW), became the first FSU faculty member to earn a MacArthur Fellowship — also known as the “genius grant.” Zollar’s award was acknowledgment for using the power of dance and artistic expression to celebrate the voices of Black women and promote civic engagement and community organizing. The grant includes a $625,000 award from the John D. and Catherine T. MacArthur Foundation.

The Association of Public and Land-grant Universities (APLU) named Florida State University the winner of its 2021 Degree Completion Award in recognition of the university’s comprehensive efforts to support all students in earning their degrees. FSU’s 74 percent four-year graduation rate is the best in Florida and among the top 10 in the nation. The university raised graduation rates while virtually erasing disparities between underrepresented and traditional student populations. 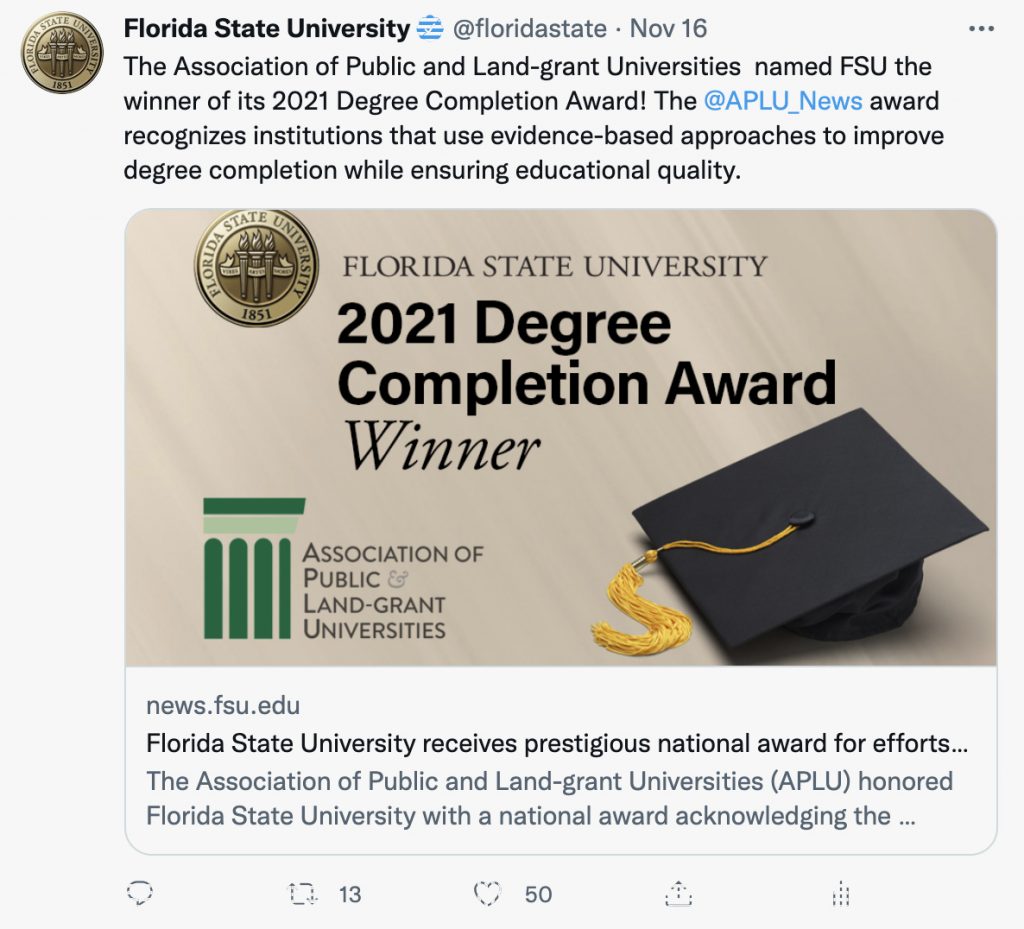 FSU Recognized for Dedication to Advancing Diversity, Equity and Inclusion

Florida State University, along with its College of Medicine, earned a trio of honors from INSIGHT Into Diversity magazine, highlighting the university’s continuous efforts and innovation in advancing equity and diversity as a top priority. For the eighth consecutive year, FSU received a Higher Education Excellence in Diversity (HEED) award, which recognizes U.S. colleges and universities that demonstrate a commitment to diversity and inclusion, with a sustainable impact on the campus community and culture. INSIGHT also named FSU a Diversity Champion — one of 15 institutions that scored in the top tier of all HEED Award institutions. In addition, the FSU College of Medicine received the 2021 Health Professions HEED Award from the magazine.

The 2021 fall semester marked a return to face-to-face classes and in-person staffing on Florida State University’s campus after months of flexible learning and working due to the COVID-19 pandemic. To help ensure safety, the university continued to offer and promote COVID-19 testing and vaccines. Over the past year, the university administered 23,500 shots of the COVID-19 vaccine, and more than 5,000 air purifiers were purchased and placed in classrooms and offices throughout campus.

President Joe Biden appointed Laura Greene, the chief scientist at the Florida State University-headquartered National High Magnetic Field Laboratory, to the President’s Council of Advisors on Science and Technology (PCAST) in September. Greene, who is the Marie Krafft Professor of Physics at FSU, was part of Biden’s first group of appointees to the council. She has held leadership roles in many of the nation’s most prestigious science organizations, including president of the American Physical Society and a member of the Board of Directors for the American Association for the Advancement of Science.

Popular Science named Allison Wing, an assistant professor of meteorology in the Department of Earth, Ocean and Atmospheric Science, to its list of early career scientists conducting groundbreaking research in their fields. The honor is in recognition of Wing’s work on tropical convection, or the clustering of clouds and thunderstorms.

Wing, who arrived at FSU in 2017, has received funding from the National Science Foundation, NASA and the National Oceanic and Atmospheric Administration. Her research focuses on some of the most significant unanswered questions in atmospheric and climate science, such as what controls the number of tropical cyclones around the world.

Two teams of Florida State University researchers received significant grants from the National Institutes of Health to support their work addressing improvements in how health care is administered. A multidisciplinary team of researchers from Nursing, Medicine and Psychology was awarded $14.5 million from the NIH to build a diverse community of early career researchers committed to improving mental health and chronic disease prevention and management. Another team of FSU researchers from Medicine and Social Work received a $3.1 million NIH grant to address racial inequities in health care — the first ever to be granted by the National Institute of Minority and Health Disparities. 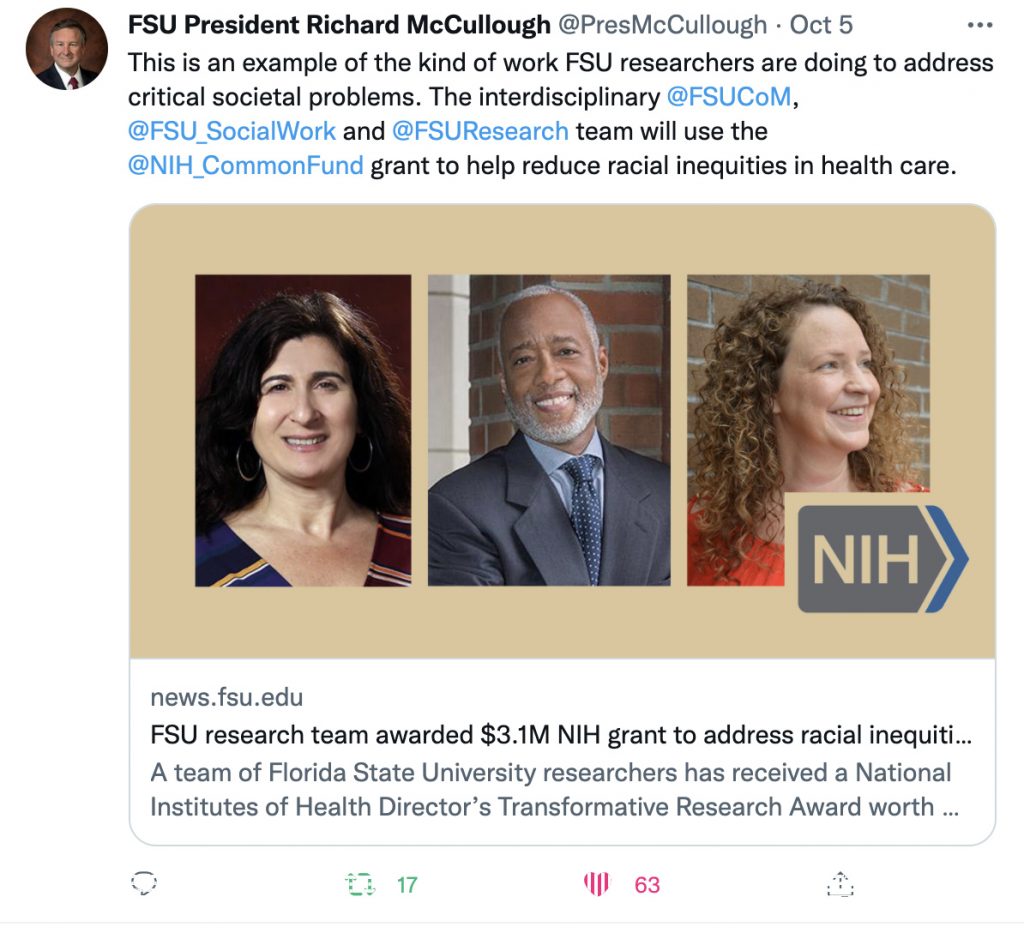 In October, the National Science Foundation announced a $15.8 million grant to fund the production of a detailed design for the world’s most powerful superconducting magnet at the Florida State University-headquartered National High Magnetic Field Laboratory. While the National MagLab is already home to more than a dozen world-record magnets used by researchers from around the world, the future 40-tesla magnet will advance the study of quantum matter with its low-noise environment that surpasses present-day resistive and hybrid magnets.

Professor of English Maxine Montgomery earned a collaborative research grant from the National Endowment for the Humanities to digitize the work of award-winning American novelist Gloria Naylor and develop a model for engaging Black women’s literary archives. Montgomery will use the three-year, $100,000 award to travel to Pennsylvania and collaborate with scholars at Lehigh and Sacred Heart universities.

For the third time in the past eight years, the top-ranked Florida State women’s soccer team won the NCAA Championship. FSU bested No. 13 BYU in a penalty kick shootout to win the Women’s College Cup held in Santa Clara, California. FSU’s women’s soccer program has the second-most NCAA titles in the history of the sport and is one of just two teams to ever win three titles in an eight-year span.

McCullough appointed Professor and Dean of the College of Social Work James J. Clark as the university’s next provost and executive vice president for Academic Affairs. Clark has served as professor and dean of the college since July 2015. He succeeds Sally McRorie, who is returning to the faculty after seven years in the role.

McCullough selected Michael Alford as the university’s next Vice President and Director of Athletics. Alford, who has served as president and CEO of Seminole Boosters, Inc. since 2020, is an accomplished leader with a wealth of experience in collegiate and professional athletics and a proven track record of fundraising, hiring successful coaches and managing elite athletics programs. He succeeds David Coburn, who is retiring.