The Tallahassee and Florida State Police Departments are working diligently to provide a safe and enjoyable experience for all of the 84,000-plus visitors who come to enjoy the home football games. In preparation for upcoming FSU and FAMU football games, they are reminding fans of the traffic pattern around the downtown area.

TRAFFIC INSTRUCTIONS: Fans are encouraged to use the following roadways to gain access to parking on and around FSU’s campus.

On several weekends during the season, there are home games at both universities and vehicle traffic will be heavy. Everyone is advised to add extra time for travel to ensure early arrival to the game and plan for some delays. Traffic will be especially heavy on Tennessee Street, West Pensacola Street, South Monroe Street, Gaines Street, Lake Bradford Road and Orange Avenue before and after games.

The traffic signals along West Pensacola Street will be set to “flash” pregame to give priority to westbound traffic traveling along that route toward Doak Campbell Stadium. TPD will be on post along this route two hours prior to the game. TPD will also take control of the lights and intersections once all personnel are on post. Other intersections closer to Doak Campbell Stadium will be controlled by TPD as much as five (5) hours before the start of the game. 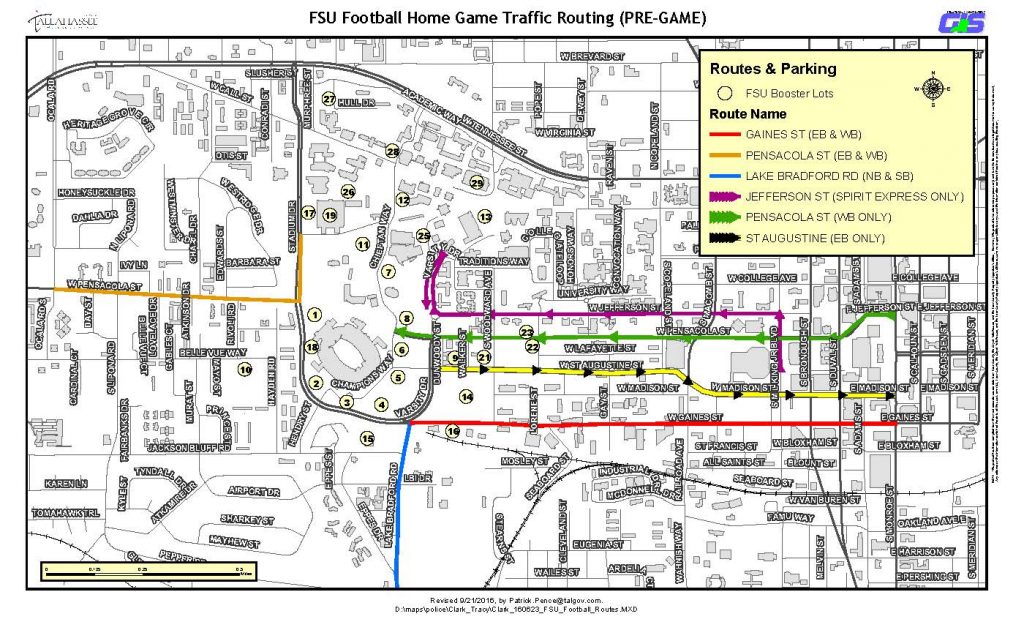 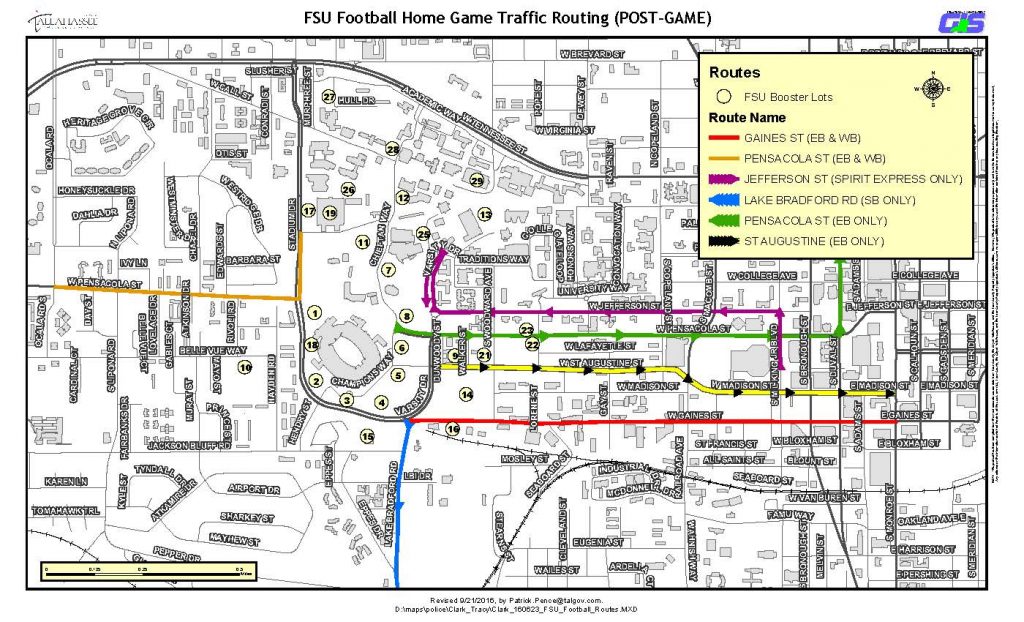 Tickets for the shuttle are $5 per rider and will be on sale at the Tucker Center ticket office. Riders will be provided with an armband. Service begins two hours prior to kickoff. Accessible shuttles from Garage Number 5 (St. Augustine Street Garage) are available for fans with disabilities at no charge. No open containers or coolers are allowed on Spirit Express buses or accessible shuttles. Service ends one hour after the end of each game. For rides back to the Tucker Center after the game, riders must present their armbands to the driver for boarding.

COLLABORATION: The City of Tallahassee and Florida State University participate in numerous meetings throughout the spring in preparation for the football season. The following are several initiatives for the games:

The SeminoleSafe App: This is the official mobile safety tool of Florida State University. Fans can refer to the SeminoleSafe App under tab GAME DAY GUIDE for real-time updates and additional information for home football games from direct turn-by-turn directions to their designated Booster or general parking lot, clear bag policy and instructions, prohibited items inside the stadium and real-time weather data on campus. Fans can also download the Waze Traffic App via SeminoleSafe. All game day traffic routes both pregame and postgame are entered into the app to provide the most direct routes taking into consideration detours, closures and congestion.