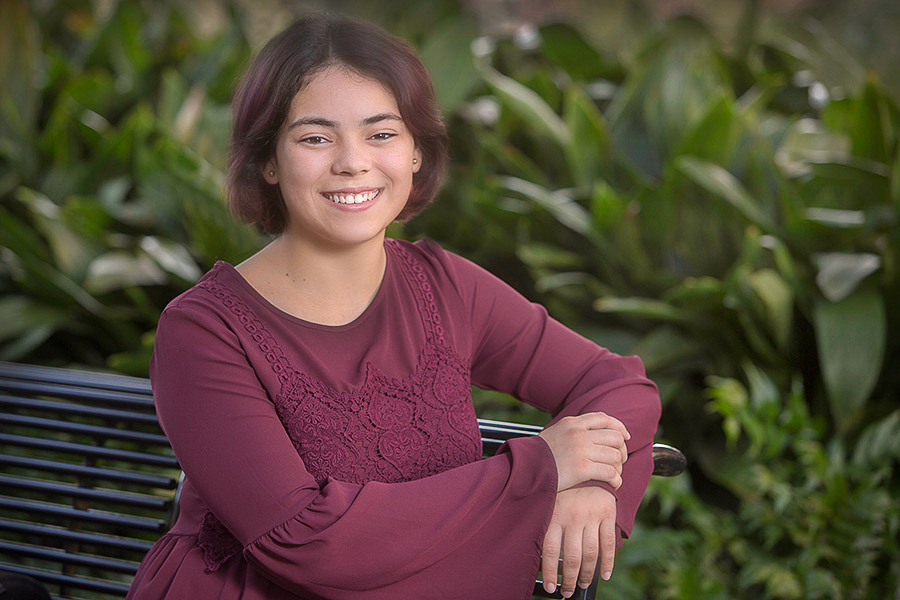 “FSU allowed me the freedom to explore interesting questions outside the educational confines of the classroom.”

Mendieta’s relationship with religion began at a young age. She grew up around her family practicing different versions of Christianity and Catholicism while alternating living between the Republic of Panama and Tallahassee.

“I like having religion as a perspective of observing the world,” Mendieta said. “I want to be a physician, and patient contact is an important aspect of that. Religion not only helps give me a better understanding of my patients, it also keeps me engaged in community service.”

Mendieta’s family background was also what prompted her interest in research and health care. Her aunt is a dentist, and her uncle is an FSU alumnus and researcher who studies long-term care. That interest grew when both of her grandparents began needing the support of a long-term care system during her senior year of high school in 2014.

Mendieta said she learned that long-term care systems can be unreliable and that there are a lot of difficulties with assisted living. She wanted to help others like her grandparents and began on the career path of becoming a physician specializing in geriatric-centered care.

She needed a university that could nurture her interests in the medical field and research, while also offering opportunities for student involvement.

“I was drawn by the fact FSU sponsors undergraduate research as an avenue for a more wholesome educational career through its many programs and scholarships,” Mendieta said.

Mendieta wasted no time honing her research skills. She joined the organization Connecting Experimental Lab and Life Sciences (CELLS), which introduces and prepares undergraduate students to conduct research by connecting them with research faculty. Through CELLS, Mendieta met her mentor and thesis director Kim Hughes, a biology professor. She began working in Hughes’ lab conducting research on the male molly fish, studying the seasonal changes in their size and alternative mating tactics.

“I wanted to better understand how genetic variation is maintained within molly fish populations,” Mendieta said. “I enjoyed working with these fish, and working as a lab tech taught me about research and allowed me to practice different techniques in fieldwork.”

“Ivonne’s dedication to conducting high-quality research is exemplary,” Hughes said. “Her research accomplishments and commitment to service to her fellow students are truly remarkable. Equally remarkable is her zeal for tackling new challenges, both in academics and in improving the campus environment.”

In the summer of 2017, she was awarded an IDEA Grant for $1,000 for her research, and she presented it at the 2017 Fall Showcase of Undergraduate Research Excellence. Mendieta continued researching molly fish as a part of the Research Experiences for Undergraduates Program, and in the fall of 2017 was awarded the Bess H. Ward Honors Thesis Award. She also gave an oral presentation on the topic at the Meeting of the Minds Conference in Boston, Massachusetts, in spring of 2018.

Aside for being an all-star researcher, Mendieta was also zealous about giving back to the community. She was a member of the Minority Association of Pre-Medical Students (MAPS), an outreach program for minorities who are interested in medicine and want to create change in the community via service. While volunteering for MAPS, Mendieta began working every year for service events like The Big Event, where she read bedtime stories to the children of the Big Bend Homeless Coalition. She eventually became the MAPS community service co-chair, organizing events on a weekly basis and received the association’s Most Dedicated Volunteer award in 2016. Mendieta also co-founded the Pre-Latino Medical Student Association Network alongside fellow FSU student Laura Serrano. As co-founder, Mendieta coordinated and volunteered in service events to help the Migrant Education Program in Quincy, Florida.

“These organization means a lot to me because they create impactful relationships within the community and develop compassionate pre-medical members,” Mendieta said. “I have also found the strongest bonds of friendship have been forged via mutually shared hours in service to the community.”

This summer, Mendieta traveled to an island in the Republic of Panama to work under FSU professor Emily Duval, researching predation on lance-tailed manakin bird nests in the area.

After graduation, she plans to apply to medical school and work as a certified nurse assistant, while continuing her pursuits in research.

“FSU allowed me the freedom to explore interesting questions outside the educational confines of the classroom,” Mendieta said. “I am extremely grateful to be a Seminole.”