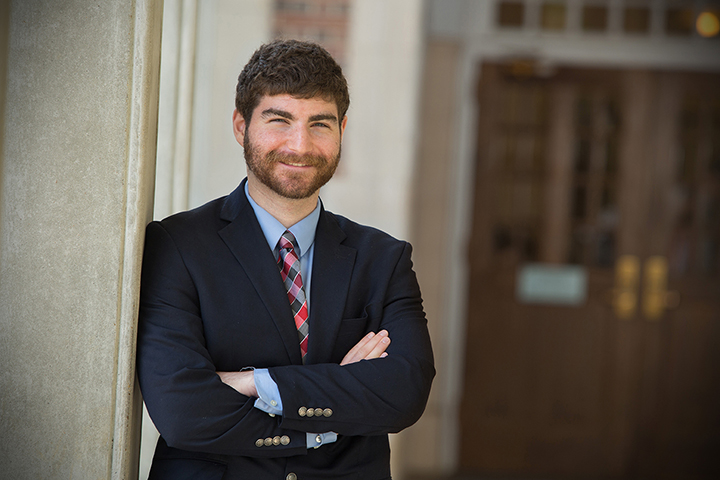 “There's so much opportunity here at FSU to find something that you love, pursue it and have it supported.”

Jeffrey Edelstein never could have predicted that his life would be changed by juggling.

During his freshman orientation, Edelstein — now a senior double major in music and information systems — attended a presentation by motivational speaker Curtis Zimmerman. As a way of illustrating the capacity of his young audience to address complicated challenges and learn new skills, Zimmerman set out to teach every student in attendance to juggle. Some picked up the subtle rhythm of three-ball juggling quickly, others caught on by slowly refining their technique and a few struggled to sort out their coordination.

For Edelstein, the experience not only represented the acquisition of a new skill that would blossom into a passion, but also a valuable lesson that would color his approach to university life.

“The entire summer after that speech, I spent juggling,” Edelstein said. “As I started my freshman year, I was juggling everywhere. I got better and better and started to learn new tricks, and I happened to meet a juggler who was in the FSU Flying High Circus. He told me that if I wanted to audition for the circus then I needed to learn to juggle clubs, so he taught me the basics. The following year I auditioned and got in. Ever since then I’ve been part of the juggling team.”

A featured role in the famous FSU circus was never a part of Edelstein’s plans, but it soon became fundamental to his identity.

“It’s one of those things that I never expected, I didn’t know how to juggle before I came to FSU, but now it’s a part of my life,” said Edelstein. “It’s something that I’m so happy to have, it’s my absolute number one favorite hobby.”

For Edelstein, a Plantation, Fla. native, it was FSU’s esteemed College of Music that initially drew him to Tallahassee. Soon, though, he realized that he wanted to broaden the scope of his scholarship to include two long held passions: education and autism studies.

After networking with professors and exploring seemingly disparate research paths, Edelstein was able to marry his interests in music, education and autism into an undergraduate research career that defied easy categorization.

“It was always important to me to find that sweet spot,” Edelstein said. “My brother has pervasive developmental disorder, a subcategory of the autism spectrum disorders, so I’ve always been curious about how our experiences differed. Along with that, I’ve wanted to be involved with education in some meaningful way since I was a kid. I like being able to engage with research that isn’t necessarily part of my major but still plays into what I want to do and helps build the skillsets that I want to develop.”

Alongside faculty from FSU’s College of Education, Edelstein conducted extensive research on the experiences of college students with autism. He was instrumental in the drafting of a successful $300,000 grant application, he had the opportunity to teach undergraduates, and he attended international conferences on autism education and research.

Edelstein’s work with the College of Education culminated in the establishment of a nonprofit, The College Autism Network, which advocates for evidence-based efforts to improve access, experiences and outcomes for college students with autism.

Edelstein said that the principle motivation of his research is to have a practical and positive effect on the lives of real people.

“When doing research, one question that often comes up is ‘you’re doing your investigations, you’re doing your studies, but are you affecting people?’ Making a difference was always core to this work, so we were always talking about ways that we could expand our reach outside of academia, and the nonprofit was the perfect means of accomplishing that.”

“Professor Cox has a mission to his research, and I admire him for his drive to make sure the work we’re doing matters,” Edelstein said. “All of our conversations preceding the founding of the nonprofit were driven by a desire to make sure the information reaches people, that it’s freely accessible, and that it’s not hidden behind research jargon. Professor Cox is all about allowing people to get the information they need.”

After graduation, Edelstein plans to attend the University of Michigan and pursue a master’s degree in higher education. He hopes to one day be an educator, but he’s always on the lookout for ways to improvise new paths and projects where his interests intersect.

What makes Edelstein so adventurous? He said that it can all be explained by his unexpected love of juggling.

“When it comes to being open to opportunity, I always go back to the juggling,” Edelstien said. “It was something that I didn’t expect, something that just showed up, I found enjoyable and kept pursuing. Now this spring will be my fourth show with the FSU circus. It’s become something that is part of my life.”

According to Edelstein, FSU is the perfect place for students like him, who relish a breadth of interdisciplinary opportunity.

“There’s so much opportunity here at FSU to find something that you love, pursue it and have it supported,” Edelstein said. “Students should let FSU surprise them, because that’s what it did for me.”