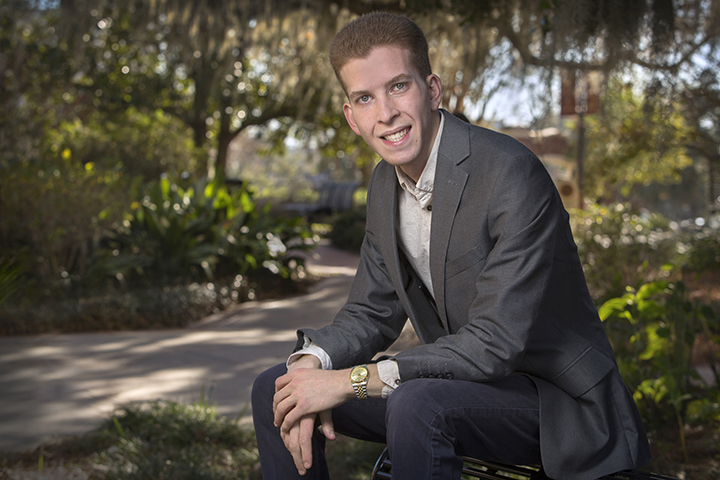 “How do we act, why do we act the ways that we act, what pressures consolidate to make us act in certain ways?”

Jacob Goldstein-Greenwood says that his interest in psychology was born of a long-harbored eagerness to understand the fundamental motivations of human action.

“I had always flirted with the ideas that are central to psychology,” said the sophomore from Tallahassee. “How do we act, why do we act the ways that we act, what pressures consolidate to make us act in certain ways?”

These were the kind of big, challenging questions that energized Goldstein-Greenwood’s academic ambition.

Before choosing specific a field of study, he was determined to explore the particularities of human morality and decision-making, and the ways that this decision-making might have the potential for recalibration and improvement.

“If we’re going to figure out how we should be acting, we need to have a good grasp on how we do act,” Goldstein-Greenwood said.

Guided by these principal questions, he explored fields like evolutionary biology and economics, however it was FSU’s tremendous psychology program and distinguished faculty that convinced him to pursue his interests through studying moral processing.

“Florida State is a powerhouse in my area of study: psychology,” he said. “The Department of Psychology is committed to its students and offers myriad opportunities for undergraduates like myself to get involved in the department’s research projects.”

In addition to FSU’s renowned psychology department, it was Goldstein-Greenwood’s acceptance into the rigorously selective Presidential Scholars program that made Florida State an especially attractive destination.

The scholarship program, which offers four years of financial support as well as unique academic and research opportunities, is designed to afford exemplary undergraduate students the chance to make profound, transformative academic contributions.

Over the summer, he was awarded a $4,000 IDEA Grant from FSU’s Center for Undergraduate Research and Academic Engagement to continue pursuing his research on moral judgment and decision-making.

Goldstein-Greenwood credits much of his academic success to his relationship with his research advisor, Assistant Professor of Psychology Paul Conway.

“I got really lucky,” Goldstein-Greenwood said. “My relationship with Dr. Conway has been by far the most important piece in my FSU experience. He’s been tremendously helpful.”

“The first couple of times that I met him, I knew that if I was going to learn from a guy who could teach me the ropes of rigor and thinking creatively and innovatively before graduate school, this was the guy to work with.”

Conway touts Goldstein-Greenwood as an exceptionally talented student with refined instincts for research and academic inquiry.

“Jacob is a prodigy,” Conway said. “His proposed research project is something he developed on his own with only mild consultation from me. It presents a novel set of hypotheses that are, nonetheless, straightforwardly derived from the current literature and will expand understanding of moral psychology beyond current boundaries. I have little doubt that Jacob will have academic publications to his name before he graduates.”

After graduation, Goldstein-Greenwood intends to continue studying psychology and moral processing in graduate school and eventually teach it as a university professor.

“I would love to continue researching the moral mind for the whole of my career,” Goldstein-Greenwood said. “I’m excited by it. I think there a lot of fun opportunities still out there for young academics.”

Goldstein-Greenwood hopes that his research will enrich popular understanding of moral decision-making. His goal is to make complicated, technical academic ideas accessible and actionable in the public sphere.

“Ultimately, the goal is not just publish and publish and get tenure, the goal is to find something true about the way humans operate,” Goldstein-Greenwood said. “Introducing these ideas to the public and making them a public conversation will help us be a bit more reflective and a bit more conscious of the moral choices that we make.”

Goldstein-Greenwood is still driven by those same big questions about human behavior that fascinated him as an incoming freshman, and he hopes that his research will play a part in the project of demystifying morality.