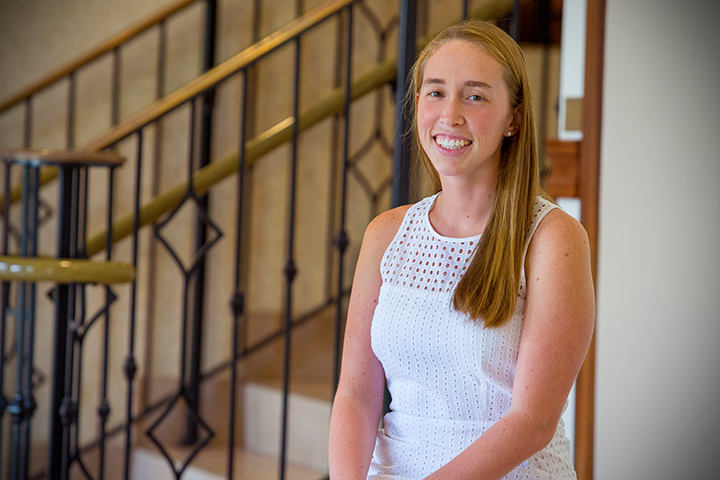 “I have learned so much through service experiences, and I wanted to identify the most effective ways to motivate all people to serve, thus identifying the value of service through their own experiences.”

Growing up surrounded by family members who had graduated from Florida State University, Marigny Nevitt’s passion for the Garnet and Gold sparked at an early age.

However, it was a visit to FSU in the spring of her senior year of high school that confirmed her decision to attend the university and make it her home.

“Once I came and saw the opportunities for academic success and the welcoming community that FSU fostered, I knew that it was my turn to attend FSU and earn the right to call myself a Seminole,” said Nevitt, who earned a bachelor’s degree in sociology and philosophy in May and is pursuing a master’s degree from FSU this fall.

As an undergraduate, Nevitt began her journey in volunteerism through participation in Florida State’s Service Leadership Seminar, coordinated by the Center for Leadership and Social Change. During the weeklong experience, Nevitt learned about the Tallahassee community and how the resources at FSU positively affect the greater area. The event, focused on community service, identity and leadership, marked the beginning of her dedication to the idea of servant leadership.

For two years, Nevitt served the Grace Mission Episcopal Church through the Community Ambassador Program run by the Center for Leadership and Social Change. As a leader of Grace Mission’s afterschool program, Nevitt oversaw 25 children. Her position entailed recruiting volunteers for one-on-one tutoring and establishing a direct and personal interaction with the children.

“My service with Grace Mission was undoubtedly the most rewarding part of my FSU experience,” Nevitt said. “Working with the children from Riley Elementary brought me in touch with the community surrounding our university and gave me the opportunity to help other students see past themselves to the bigger picture.”

Nevitt’s volunteer experience at Grace Mission Episcopal Church served as the inspiration for her undergraduate honors thesis research topic. The project was initially conceived during a capstone sociology course, and later became the basis for research in volunteerism. Through qualitative interviews, Nevitt sought to evaluate the effect of the structure of gender on people’s motivations to volunteer.

“I have learned so much through service experiences, and I wanted to identify the most effective ways to motivate all people to serve, thus identifying the value of service through their own experiences,” Nevitt said.

In addition to her local volunteer work, Nevitt has also expanded her service efforts beyond the nation’s borders. During spring break 2015, Nevitt participated in the Center for Leadership and Social Change’s Alternative Breaks program.

For a week in the Dominican Republic, she served with the nonprofit BLUE Missions to build stable outhouses for rural community Los Puyones. The efforts of Nevitt and the other volunteers helped improve sanitation practices for the community.

“Living in the local community where we were building latrines and communicating through smiles, gestures and broken Spanish served as a reminder of the humanity that unites our global population and why we ought to always be mindful of our actions and impact on the world,” Nevitt said.

Since successfully defending her thesis and graduating in spring 2016, Nevitt is continuing her education at Florida State with a master’s in philosophy. Her motivation to pursue a graduate degree was inspired by her favorite professor at FSU, John Schwenkler.

“Dr. Schwenkler has a passion for philosophy and sharing knowledge that can be an inspiration for his students,” Nevitt said. “I believe that he challenges his students because he truly believes in each student’s capabilities and wants to see potentials actualized.”

Nevitt looks forward to continuing to learn from Schwenkler as she pursues a graduate degree at FSU.

“I cannot think of a student in my six-plus years as a professor whom I’ve been more impressed with than Marigny,” Schwenkler said. “She is smart, curious and open-minded, and she has a knack for getting to the heart of philosophical issues in a way that most undergraduate students cannot.”

Nevitt eventually plans to attend law school. As an undergraduate, she became a member of the Honors Legal Scholars program in 2014 and served as president of the Women in Pre-Law Society in 2014-2015.

Ultimately, she hopes to earn her law degree and represent populations that do not have a voice.

Everyone deserves a fair chance at success, according to Nevitt, and she hopes to help people get that chance in the face of the law.