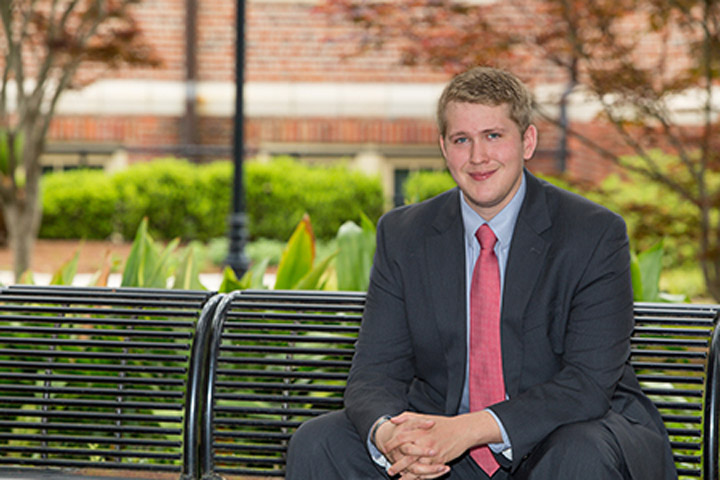 “I think of myself as an average person who wants to help others better their position in society. I look to my education to further my understanding of who I am and where I fit among us.”

The winner of both a Florida State University URCAA award as well as a national Truman Scholarship, psychology and sociology student Daniel Hubbard still manages to stay humble.

“I think of myself as an average person who wants to help others better their position in society. I look to my education to further my understanding of who I am and where I fit among us,” Hubbard said.

Before he was a student at Florida State, Hubbard spent five years in the Army as a medic working at Fort Drum, Walter Reed Army Medical Center and in Afghanistan. There he participated in the integration of the medical center’s anesthesia and pain clinic departments. Hubbard excelled at Walter Reed and became known as a key member of his team, characterized by Army Maj. Kirk Liesemer, a pediatric cardiologist who served with Hubbard, as the best medic he had ever seen in his 14 years of medical practice.

“While I was a medic in the Army, I found a passion for figuring out what was medically wrong with someone so that I could help them overcome their medical issues,” Hubbard said.

During his time as a medic, Hubbard developed a strong interest in mental health and military suicide. When his contract finished and he was honorably discharged, Hubbard decided he wanted to pursue an education in psychology, beginning his education by first completing his associate’s degree at Orlando’s Valencia College.

After completing his associate’s degree, Hubbard carefully evaluated the major universities in Florida to decide where he would continue his education. Florida State became his top choice for a number of reasons, including the quality of its psychology department, its reputation as one of the nation’s most veteran-friendly universities and opportunities for undergraduate research. Attending FSU also would allow Hubbard to remain in Florida and close to his family. Hubbard applied to FSU, was accepted and enrolled in his first classes in summer of 2014.

Owing to his interest in mental health, Hubbard declared his major as psychology and his minor as sociology. After taking his first sociology classes, Hubbard realized he had a strong academic interest in that discipline as well, and decided to declare sociology as a second major at the end of fall of 2014.

For Hubbard, one of the most significant things to happen to him as an FSU student was being given the opportunity to work in the laboratory of Thomas Joiner, Florida State’s Robert O. Lawton Distinguished Professor of Psychology and one of the world’s leading experts on the causes of suicide. This opportunity was facilitated by Hubbard’s affiliation with the Undergraduate Research Opportunity Program, or UROP.

In Joiner’s lab, Hubbard worked on a study observing the effects of a pharmaceutical as well as a behavior intervention on a known suicide risk factor. It is through this work with Joiner that Hubbard began to develop his proposal for the Truman Scholarship, basing it on a theory created by Joiner. The proposal incorporated the research of others to develop a feasible strategy for decreasing suicide rates within the Army.

Shortly after he began working on his Truman Scholarship proposal, Hubbard also began a proposal for the Undergraduate Research and Creative Activity Award, or URCAA. Hubbard went on to receive both awards, and of the 58 Truman Scholarship recipients for 2015, he was the only student in Florida to receive the honor.

“By far, my most memorable achievement to date was being awarded the Truman Scholarship,” Hubbard said. “The award itself is a phenomenal honor and has connected me to a remarkable community, but I know it would have not been possible without faculty support.

“When I look back on my path to this award, I found the relationships I developed with faculty, staff, and other Truman Scholars has meant the most to me,” he said. “All of these individuals have taught me something valuable.”

Beyond the honor of receiving these awards, the process of applying for them had a great impact on Hubbard.

“This forced me to think about the larger implications of research and taught me that research can be used as a way to advocate for those who are unable to understand how their troubles might be eased,” Hubbard said. “The scholarship process also helped me to understand the importance of meaningful social interactions, particularly with those in the military who suffer from feelings of alienation and burdensomeness.”

Using his Truman and URCAA awards, Hubbard will be performing a study that aims to examine differences in sex and number of deployments and their effects on some of the primary constructs of the interpersonal theory of suicide in a sample that is solely comprised Army soldiers. Hubbard hopes that this research will contribute to a growing body of evidence that furthers understanding of how the interpersonal theory of suicide can be used in evaluating military suicide.

Hubbard was assisted in his Truman Scholarship proposal process by Craig D. Filar, director of the FSU Office of National Fellowships.

“Daniel possesses both a keen, inquisitive mind and an aware, compassionate heart,” Filar said. “He approaches every challenge and task with complete focus, and it was a great pleasure mentoring him in the Truman Scholarship application process.”

Another highlight of Hubbard’s academic career was receiving the Bob E. Leach Award and the Student Seminole Award at Florida State’s annual Leadership Awards Night this spring. The Bob E. Leach award recognizes a student who is known for exemplary leadership and service to the university as well the caring and sharing attitude they exhibit through their service, while the Student Seminole Award recognizes several students who have made special contributions to the university in the areas of leadership and service.

Outside of the university, Hubbard has volunteered in the community through the Community Ambassador Program with the Center for Leadership and Social Change, working as a community ambassador for Legal Services of North Florida, a nonprofit legal firm that aids clients in civil matters. With LSNF, he has worked with attorneys to research cases for clients, most often working on cases for veterans.

“This was a particularly enriching aspect of my work, as I was able to use my knowledge and skills to assist veterans in areas that non-veterans often find confusing,” Hubbard said.

Additionally, Hubbard worked with LSNF’s resource developer creating pamphlets and fliers for the agency and recruiting students from FSU. Once suitable volunteers were found, Hubbard helped them to bring in contributions for LSNF’s Jazz for Justice fundraiser.

Hubbard’s plans after graduation are still evolving, but pursuing graduate work in psychology, sociology or measurements and statistics are definite options for him. He is also considering coursework that would prepare him for a career in urban and regional planning and its intersection with law. Currently, however, Hubbard is focused on his coursework and on broadening his understanding of his current disciplines so that he may be best prepared for wherever life takes him.