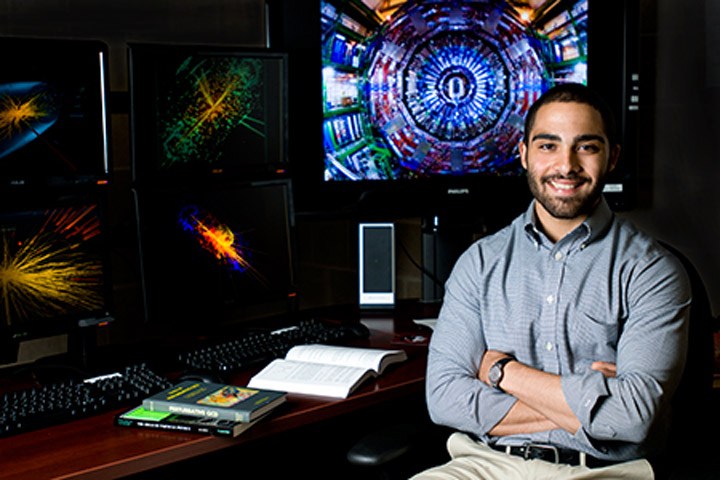 “The most exciting thing about this research is honestly the proof that physics works.”

Austin Skeeters, a 2014 Undergraduate Research and Creative Activity Award winner, believes the best part about his studies in the high energy physics lab is being able to witness scientific laws proven again and again. For most people, matter and energy are things they have merely been told about, but Skeeters has the rare opportunity to see scientific properties in action with his own eyes.

“The most exciting thing about this research is honestly the proof that physics works,” Skeeters said, “It’s mind-blowing to see not only that it works, but that the things we do know work with such precision. It’s amazing to see it work when you understand it and can reproduce it.”

In addition to his physics and chemical science double-major — as well as future plans to declare a triple major in computational mathematics — Skeeters has dedicated his time to undergraduate research for the past three years. He has studied particle detector construction and testing for applications in nuclear physics, standard model confirmation through data mining existing particle collision data and detector optimization using computer simulations of particle collisions and material interactions in high-energy physics.

His mentor, physics Professor Todd Adams, he says, has taught him everything he knows about particle physics and has been patient with every question and confusion Skeeters has had along the way. It is support and encouragement like this that has kept Skeeters invested in his goals and enabled him to keep asking questions and accumulating knowledge to master his subjects.

“Austin has been working with the FSU High Energy Physics group on analyzing data from the D0 and CMS experiments at Fermilab and CERN,” Adams said. “He has developed algorithms to analyze data and experienced the challenges and thrills of working on cutting-edge research. The ability to solve problems that Austin has already demonstrated will be an asset for any future endeavor.”

Skeeters is working with Florida State’s high energy physics lab to assist in the study of the Compact Muon Solenoid (CMS) experiment. The CMS detector studies proton-proton collisions at the Large Hadron Collider at CERN, a particle physics laboratory near Geneva, Switzerland. Skeeters has been afforded the opportunity to be part of hands-on experimentation with the detector in semesters past and now works behind the scenes, analyzing data and producing algorithms.

To illustrate the caliber of researcher with whom Skeeters studies, the CMS research team was part of an international effort that led to the discovery of a new particle on July 4, 2012, that captured the world’s attention. This discovery supported the existence of the Higgs particle and enhanced human knowledge of the physical world.

Teaching is another way Skeeters reinforces his knowledge of physics. He is currently in his third semester as a physics learning assistant at FSU. Skeeters believes working with these students and discovering the different ways in which they learn has served as a valuable learning experience for himself as well. As a recent student in the subjects he helps teach, Skeeters is able to identify the misconceptions and errors new students make and guide them through the learning process.

“I tell my students ‘I’m only going to put in the effort if you are too,'” he said, “A lot of them really stepped up to the plate and became better students. One of my students failed the first test, but ended up having around the third-highest grade in the class.”

For Florida State senior Austin Skeeters, involvement in undergraduate research, learning assistantships and his academic departments has served as a way to transform a public university of more than 40,000 students into a small, supportive niche of intellectuals. This tight-knit community has fostered friendships for Skeeters with his peers, professors and the students he mentors.

Skeeters has since become friends with many of his students, fellow learning assistants and mentors at Florida State. This community has created for Skeeters a support system that has enhanced his learning and understanding of people and created an environment where colleagues are friends. Skeeters frequently spends time socializing with the students in his department. Adams, he says, has invited him to dinners at his house every summer where he cooks giant steaks for all of his research students.

“Everybody always thinks of FSU as this big place, but anybody who works with Professor Adams knows he has really made an effort to make FSU feel smaller and more homey — to make you feel like you really belong,” Skeeters said.

So what future communities might Skeeters embrace after graduating FSU next spring? You might expect that this soon-to-be triple major is preparing for a future in a lab or university classroom, however Skeeters has a different career path in mind. Skeeters hopes to pursue an accelerated one-year law program at Notre Dame to practice intellectual property law.

With a background in the sciences and mathematics, Skeeters will be able to understand the mechanisms behind products and articulate proper documents to protect the specific ideas and innovations of creators. For now, Skeeters will be enjoying his last year at Florida State and thriving in the community that has helped shape and mold him into the devoted and resourceful student he is today.