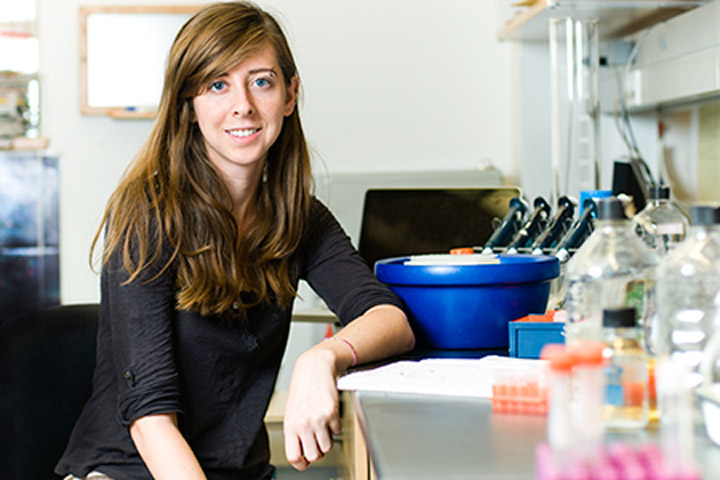 “Science is really representative of art because you basically design your own experiments to be as creative as you want them to be.”

Molly Gordon is already leaving her mark on Florida State University through her study of the cell in the Department of Biological Science.

Although she spent her time as a theater set builder and art enthusiast in high school, the multifaceted Gordon, a junior, has branched into science, now spending her weekdays and many weekends in the laboratory of David Gilbert, Florida State’s J. Herbert Taylor Distinguished Professor of Molecular Biology. There she works with stem cells — a rare opportunity for a junior.

A recipient of the Undergraduate Research and Creative Activity Award (URCAA), which comes with a $4,000 stipend, Gordon spent the summer of 2014 continuing her research into the biological mechanism of replication timing in relation to cancer. She hopes to gain an understanding of why some genes replicate earlier or later than others and how diseases such as cancer can lead to an abnormal replication timing profile.

“Doing art contributed a lot,” Gordon said. “Science is really representative of art because you basically design your own experiments to be as creative as you want them to be. They have to be really detailed. I remember spending weeks on pieces in art, oil painting or charcoal, and it reminds me a lot of making experiments.”

In addition to being a URCAA recipient, Gordon has received a John Mark Caffrey Scholarship and is a member of Phi Eta Sigma, the largest and oldest national honor society for undergraduates. Through her volunteer efforts in Phi Eta Sigma, she has tutored fellow students at FSU’s Academic Center for Excellence and has welcomed new classes of Seminoles at the university’s annual New Student Convocation.

When she arrived on the Florida State campus, Gordon was unsure of her future academic path. After taking BSC 2010, an introductory biological science course taught by Assistant Professor Jonathan Dennis during her first semester, she felt that studying biology was the right choice to make. Engaging and excelling in her major coursework since the start of her FSU career has reinforced her newfound passion for science. For Gordon, working with Gilbert and graduate student Jiao Sima in her Directed Individual Study (DIS) has humbled her and fueled her interest in the field.

“Molly is a curious, intellectually-rich and diligent student who I think will be very promising in the scientific domain,” Sima said.

The one-on-one learning Molly has experienced in her DIS has made her knowledgeable in her other courses, and enabled her to be able to help the students she tutors connect the dots, so to speak, and succeed academically. She will continue to help educate her peers as a teaching assistant for BSC 2010 and as a Freshman Interest Group leader for incoming biology majors this fall.

“After joining my Directed Individual Study in the Gilbert lab, I believe I have more to offer in an academic setting,” she said. “I know I made a difference for those students I helped with biology because I could see the looks on their faces as they finally came to terms with the material.”

Gordon won’t be slowing down any time soon. She has many more academic goals for the future. She has plans next year to take a master’s level molecular biology course — a commendable challenge for any undergraduate. After completing her bachelor’s degree, she plans to pursue her study of replication in graduate school while keeping an open mind to other topics in research. By doing several rotations in different aspects of molecular biology, Gordon feels she can take advantage of all that graduate school has to offer.

Gordon also hopes to be selected for a Goldwater scholarship, a national award that recognizes potential to go onto graduate school to do research in the STEM fields (science, technology, engineering or mathematics), or a Marshall Scholarship, which would enable her to pursue a master’s degree in London.

Outside of class, Gordon continues to shine as a scholar and philanthropist in the community. Specifically, she has regularly volunteered for Hands of Hope, a student organization that focuses on helping individuals with disabilities. Gordon learned how to use a buzz saw and helped build a ramp for a Tallahassee woman who uses a wheelchair. Being involved is part of what inspired Gordon to take action through her cellular study of disability. She sees her philanthropy with Hands of Hope as a learning experience; a way to be exposed to the different ways people can be affected by disabilities.

“It was an extremely heartwarming experience watching the recipient use the ramp with her wheelchair for the first time,” Gordon said. “I will carry that experience with me for the rest of my life.”