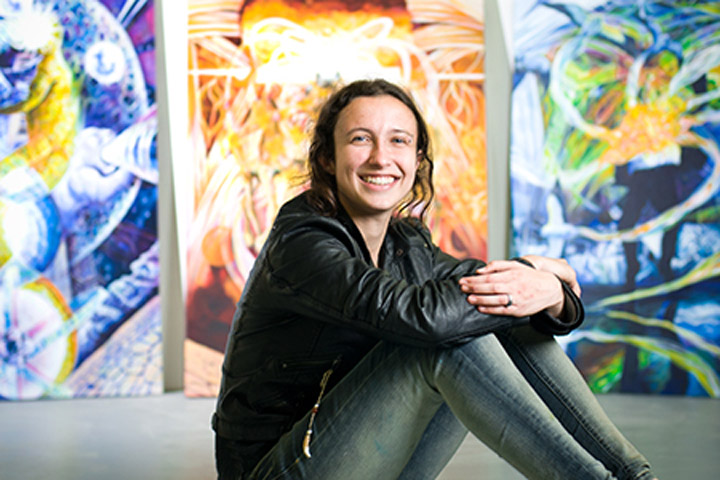 “I like my paintings to be explorations for not only myself while I'm painting, but also for the audience.”

Think of Mary Williams as an explorer.

With the modern influences of surrealism and the visionary art movement as her guides, the Florida State University studio art major uses oil painting to express her opinions and views of the world on canvas.

“I like my paintings to be explorations for not only myself while I’m painting, but also for the audience,” said Williams, who strives to make people take a moment to stop and look at what she has hidden in her work.

Though her work often depicts dreamlike environments with fantastic animals, barren landscapes and usual perspectives, it is grounded in a fascination with the old masters.

“I have a particular obsession with learning the techniques of Leonardo, Rembrandt and Raphael,” she said. “My favorite paintings in art museums were always those that were clearly representational — that is, something easily recognizable by most people.”

Williams pursuit of a broad art education received a tremendous boost over the summer of 2014. As the recipient of one of Florida State’s Undergraduate Research and Creative Activity Awards, she received $4,000 to conduct a summer research project in Austria and Spain.

During her time in Austria, Williams studied for a week at the Vienna Academy of Visionary Arts under practicing visionary artists, including Laurence Caruana and Amanda Sage. She also met Ernst Fuchs who is perhaps the most prominent pioneer of visionary art and one of the founders of the Vienna School of Fantastic Realism. She characterized her time in Vienna as “magical.”

“I’ve never studied in an environment with so many artists that were so open and friendly to each other,” she said.

While in Spain, Williams spent an entire month studying Salvador Dali and his art, visiting Dali’s home in Cadaques and his museum in Figueres, which he designed.

“The interior is confusing and is like what I would imagine the inside of any surrealist’s mind would look like,” she said.

The previous summer, Williams received a Mentored Research and Creative Endeavors Award to complete a summer research project. Using the award’s $1,000 stipend, she chose to complete a series of paintings that were meant to visually represent the balance between the male and female energies in the western Christian religion, as well as the balance between the female and male deities that represent each pinnacle of the Hindu triumvirate of the Creator, the Preserver and the Destroyer.

“This concept of balance between men and women in the Christian church is rarely focused on, despite the fact that the Virgin Mary is the emotional equivalent to the suffering that Christ endured while on the cross,” she said.

In recognition of her talent, Williams was the only Bachelor of Fine Arts student at Florida State to receive a 2013 Utrecht Painting and Drawing Award.

Lilian Garcia-Roig, a Florida State professor of art who heads the areas of painting and drawing, praised Williams as a true researcher and artist — earnest, passionate and focused. They first met in Garcia-Roig’s Beginning Painting class.

“From the first assignment to the last, Mary kept getting better and better, applying all of her new knowledge toward creating works that were true to her interests,” Garcia-Roig said.

“She listens and is open to trying anything one suggests. At the same time, she has her own ideas and interests that she then applies her new knowledge to, so she is not dependent on the teacher to tell her what she should do or think next. She takes information and ideas and runs with them, transforming them into better versions of her own interests, thought and visions,” Garcia-Roig said.

As a child, Williams says that she doodled in the margins of her school papers and was “that kid” who would draw on the walls of her home. In high school, she was known for dragging 3-foot-by-4-foot canvases back and forth from the art room every day.

“I’ve always been pulled to create,” she said. “I can’t really put into words why painting appeals to me so much. Creating my work isn’t something I always do by choice. I paint because I have to.”

Though she has dabbled in sculpting and digital work, Williams says other mediums always end up informing her painting, her default that feels most natural.

“Painting isn’t just something I do, it’s how I see the world,” she said.

As a college senior, Williams considers her passion for painting to be fully matured, fueling her continued explorations.

“Each time I complete a painting I can feel my skill and my understanding of art grow and expand,” she said. “This growth and continual progression of knowledge is so satisfying that it is one of the main reasons I am drawn to my studio nearly every day.”

As a member of the Art Students’ League at Florida State, including service as its liaison to local galleries, Williams has not only organized several art shows, but considers it her mission to help bridge the gap between artist and audience.

“I want to continuously expose members of the Tallahassee community to the artistic developments occurring at FSU from the spiritual depths of our own collection of visionary artists,” she said.

And in an age when social media pages and “selfies” too often fail to paint an accurate picture of real life, Williams hopes her art will be an encouragement to audiences to get off the Internet and explore the real world.

After graduation, Williams intends to pursue a master’s degree in painting, but only after taking a gap year so that she can take her own advice — explore the real world through travel and study outside of the traditional educational system.