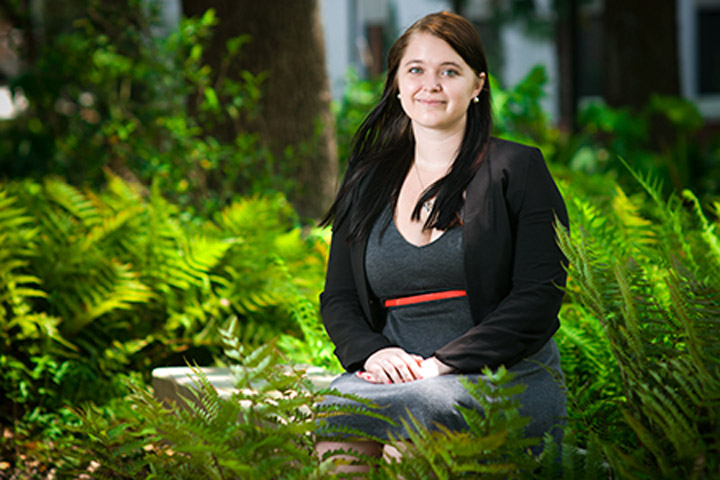 “Through my career, I want to work to creatively find ways to bridge the gap between academia and public policy, to come up with more effective solutions to combating social problems.”

Senior honors student Alexandra Olsen has impacted the Florida State University community in more ways than one. A member of the Golden Key International Honour Society and vice president of Alpha Kappa Delta Sociology Honors Society, Olsen is a researcher, leader and advocate who is dedicated to understanding the world and its people.

Winner of a Moellership Award from the Center for Leadership and Social Change and an Undergraduate Research and Creative Activity Award, Olsen’s research on the Moroccan women’s movement is her proudest work at Florida State. She travelled to Morocco in summer 2014 alongside FSU Associate Professor Deana Rohlinger and UNC-Asheville Assistant Professor Lyndi Hewitt.

As a research assistant, Olsen spent three months researching the goals, visions and gender expectations of the women’s movement post Arab-Spring. Olsen worked at a nonprofit in Morocco called the Association Oxygène Ouarzazate where she not only gathered information for her research, but also wrote grant proposals that strengthened its women victims of violence center.

“It was a chance to challenge myself by being far away geographically, while also a test to see if I could be a good ethnographer,” Olsen said. “I think the work that I did there was really meaningful.”

Since her freshman year, Rohlinger has been a major source of encouragement for and influence on Olsen. She worked under Rohlinger for two other projects including television coverage on several social movements and another that looked at the discourse surrounding femininity.

“I could go on for days about how wonderful Dr. Rohlinger has been,” Olsen said. “She has given me opportunities in all senses, from being a faculty mentor, to taking me on as a research assistant, to letting me be a course mentor for an honor’s class she’s teaching.”

Olsen concentrated on resource mobilization for nonprofits serving undocumented immigrants for her honors thesis. She was a recipient of the Bess H. Ward Honors Thesis Award in fall 2012 and a Mentored Research and Creative Endeavors Award for Honors Thesis Research in summer 2013. Olsen was also selected as a 2013 Social Science Scholar.

“As her honors thesis adviser, I can honestly say that Alex is the best and brightest undergraduate student I have ever worked with at Florida State University,” Rohlinger said.

Outside of academics, Olsen is the vice president of Advocates for Immigrant and Refugee Rights and a state policy representative for the Florida Immigrant Youth Network. She was able to play a key role in the effort to get in-state tuition for undocumented students at Florida State, a policy that would have a direct effect on many of her friends.

“It was clear that getting a college education had an extra barrier for them because they could not get in-state tuition,” Olsen said. “As someone who is passionate about education and wants to teach in the university setting, access to education is important to me.”

Olsen has been an Undergraduate Research Opportunity Program Leader for two years, in which she instructs first- and second-year students on the research process within social sciences.

After graduation she plans to pursue a Ph.D. in sociology with concentrations in social change, deviance and social control, and culture. She hopes to combine her passions of conducting ethnographic research, teaching and being an active member in the community.

“Through my career, I want to work to creatively find ways to bridge the gap between academia and public policy, to come up with more effective solutions to combating social problems,” Olsen said.