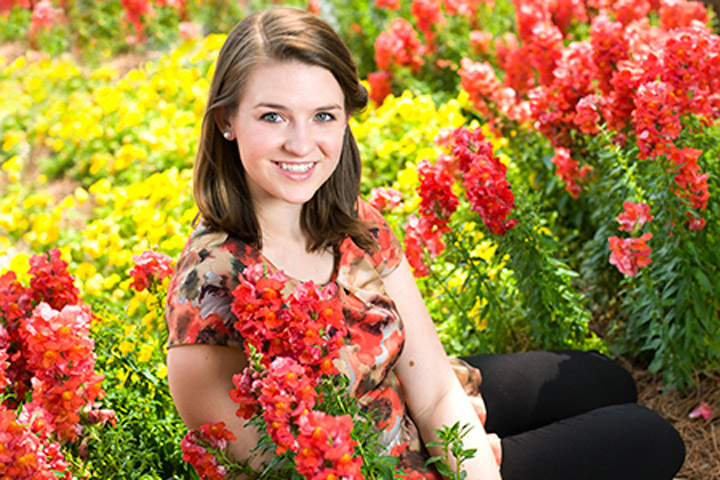 “Being someone who is able to impact younger students in the same capacity that my mentors have impacted me is one of the most enjoyable things that I do at Florida State.”

Michelle Sauer is highly involved not only in the on-campus community at Florida State University, but also abroad through her research and academic scholarship.

In the summer of 2013, Sauer was one of 10 students selected nationwide to travel to Durham University in the United Kingdom as part of the Fulbright Summer Institute Program. During this time, she worked at the Binchester archaeological dig site, where she joined British archaeologists along with American archaeology students to help unearth a Roman fort.

For the second half of that summer, Sauer took classes through the Institute of Medieval and Early Modern Studies, where she studied the Anglo-Saxon and Norman periods in Durham.

In the summer of 2014, Sauer was awarded $4,000 through the Michael J. Shaara Undergraduate Research and Creative Activity Award to return to Durham University to research the transitional phase in medieval England by studying cultural memory.

“Cultural memory is the collective perception of a group on their own history, and the way in which remembrance and emphasis of specific elements of that history build the identity of a culture,” Sauer said.

Sauer has been studying scholars’ interpretations and original manuscripts of Symeon of Durham’s work, performing translation of the original Latin text to aid her understanding, looking at the influence of Bede on Symeon’s histories, and analyzing the Anglo-Saxon artistic elements present in the Norman-built Durham Cathedral.

Pamela Robbins, an associate in Florida State’s Department of History, praised Sauer’s intellectual curiosity as representative of the best of Florida State.

“Michelle’s work with ‘historical memory’ in Durham, England, is cutting-edge and she will be a leader in her field,” Robbins said.

In addition to serving as vice president for both Phi Beta Kappa and Phi Eta Sigma honor societies, Sauer also has been the Phi Eta Sigma representative for the Council of Honor Societies at Florida State, where she assists on the Research Remix Planning Committee. The purpose of this committee is to showcase undergraduate engagement in research at Florida State.

With Phi Eta Sigma, Sauer helped first-year exploratory students build a semester schedule in the summer of 2013 as a peer academic leader. In the fall of 2013, she served as a Freshman Interest Group leader, where she mentored 12 freshmen on how to prepare for their undergraduate careers.

“I have been given so many opportunities to achieve my goals in my undergraduate career, and being someone who is able to impact younger students in the same capacity that my mentors have impacted me is one of the most enjoyable things that I do at Florida State,” she said.

Sauer is a founding member and the current president of the university’s Undergraduate History Student Association. It provides lectures and events for students interested in history and has hosted luncheons with visits from prominent World War II scholars. As a result of her role as president in UHSA, she was also selected as a grade appeal juror, where she served on a panel with faculty members to hear appeals from students contesting a grade received in their history department classes.

In addition, Sauer will continue her service with the Undergraduate Research Opportunity Program (UROP) as a leader this year.

“I think UROP made one of the biggest impacts on my academic career because without the support of my UROP leader and the opportunities that the program gave me to engage with faculty, I might never have found my passion for research,” she said.

After graduation, Sauer intends to pursue a Master of Arts in history through Durham University’s Institute of Medieval and Early Modern Studies. Sauer plans to attend Columbia University to earn her Ph.D. in history, concentrating in medieval studies with a focus placed primarily on religious history and cultural memory.