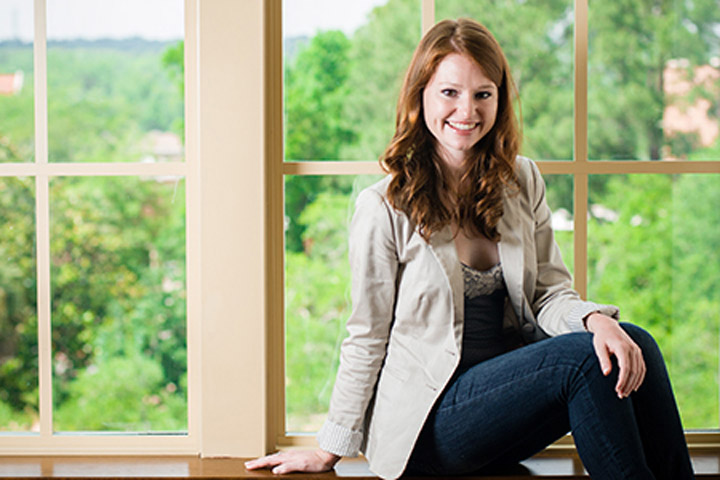 “As a society, we have a responsibility to hold the media accountable. This is where research can make a difference in the world.”

For Annalise Kapusta, it all began during preview weekend when she was a prospective freshman attending a workshop on undergraduate research. She discovered the unparalleled opportunities at Florida State University and, now a junior, has since capitalized on those opportunities and gained a global perspective in the process.

“Annalise is one of the best students I’ve ever worked with,” said Teaching Professor Mark Zeigler of the School of Communication. “She became interested in research opportunities from the first day she set foot on campus and she shows tremendous promise.”

Kapusta joined Florida State’s Undergraduate Research Opportunity Program (UROP) where she became a research assistant for Professor John Fenstermaker in the English department. Together they researched the marketing tactics of Scribner, a publishing company. Fenstermaker praised Kapusta’s ability to “unfold abstract intellectual issues” and described her as “imaginative and intellectually curious.”

After participating in the UROP leadership-training program, Kapusta became a research instructor where she created a yearlong curriculum on broad topics in research. She will continue to mentor students throughout her senior year.

“I think too many students feel pigeonholed into obtaining practical degrees,” Kapusta said. “While there is certainly credence to that train of thought, I think it’s more important to find out what you love and let the rest fall into place.”

For Kapusta, her passion for international travel sparked in high school and has been with her ever since. Kapusta traveled to Florence, Italy, with FSU’s International Programs. While overseas, she interned as an editorial assistant and contributing writer for Magenta Publishing and had a column published in an Italian newspaper, La Republica.

“As I immersed myself within Italian culture, I realized that I had more things in common with the friends I made there, in spite of our cultural differences,” Kapusta said. “It pushed me outside of my comfort zone and familiarity, but helped me grow and mature as an individual.”

With Europe at her fingertips, it’s no surprise that Kapusta took advantage of the relatively short distance from Italy to Ireland. She ventured to Belfast, a trip that would have a significant impact on her future.

With a taxi driver as her tour guide, she drove through a city separated by concrete walls three times the size of the Berlin wall. These walls divide Catholic and Protestant neighborhoods and serve as a testament to an internal struggle called the Troubles.

Disturbed that she did not know of the conflict beforehand, Kapusta “felt an injustice to the memory of those who died.” Upon returning home, she continued to explore the Troubles. While much of the violence has passed, tensions are still present and most likely to erupt during the Twelfth Parades, an annual celebration of Protestant culture.

“That preliminary exploration developed into a proposed research topic within my major,” Kapusta said. Along with her research partner, fellow Florida State student Kate Mazzotta, the duo was awarded Florida State’s Undergraduate Research and Creative Activity Award to return to Northern Ireland for 12 weeks. Together they are researching the relationship between negative and positive media depictions during the parades and the effects on the public’s perception.

“As a society, we have a responsibility to hold the media accountable,” Kapusta said. “This is where research can make a difference in the world.”

Kapusta plans to use the topic to write her Honors in the Major thesis and an academic journal article. She also will present her findings at media studies and Irish studies conferences toward the end of the year, as well as at Florida State’s Showcase of Undergraduate Research Excellence.

For life after graduation, she has her eyes set on a master’s program in media and international conflict at University College in Dublin where she hopes her research on Northern Ireland would distinguish her from other applicants. Writing for international media and earning a doctorate also are on Kapusta’s radar, but no matter what path she chooses, there will always be an international component.

“Knowing life outside of the narrowness of your own, observing how others live their lives and being awestruck by something that others find commonplace are such enriching experiences.”