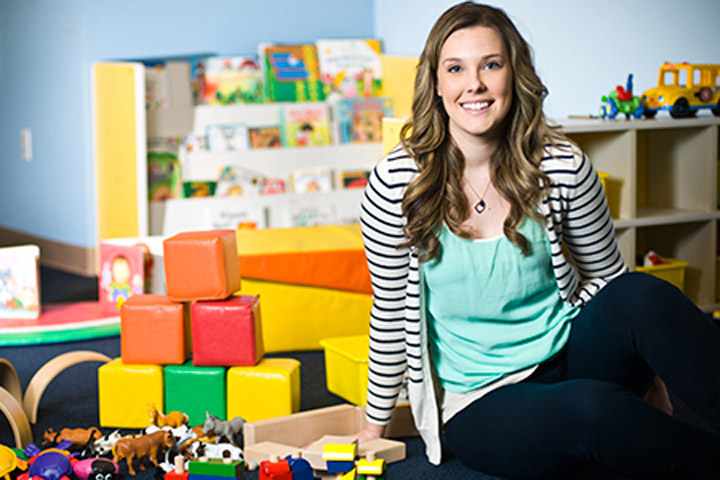 “I enjoy clinical research because it involves collecting data from actual children with autism, while providing a service to the families we are studying and learning from.”

As a passionate, independent researcher, Whitney Guthrie came to Florida State University to expand her knowledge and expertise. Florida State offered her the opportunity to work, study and conduct research with a psychology faculty that is highly productive in the research community.

“I felt that FSU would provide me with excellent training in my pursuit of a clinical research career,” she said of her choice to continue her education at Florida State.

As an undergraduate psychology major at Pepperdine University, Guthrie decided that she wanted to pursue a Ph.D. and research career. After graduating, she worked as a research coordinator at the University of Michigan Autism Communication and Disorders Center for three years with children and adults with autism.

Now at Florida State, Guthrie is working to identify and explore different patterns of change in Autism Spectrum Disorder with a two-year, $59,000 Dennis Weatherstone Predoctoral Fellowship from Autism Speaks. This grant has given her the opportunity to work on her dissertation as well as her research studies on children with Autism Spectrum Disorder, or ASD.

The Weatherstone Fellowship grant provided Guthrie with the ability to follow up with children who were previously diagnosed with ASD under the age of two, and subsequently received early intervention as part of the Early Social Interaction Project conducted at Florida State.

Whitney conducts her research by doing follow-up evaluations of the diagnosed children and their respective families when they are of school age. The results examine the long-term outcomes of Florida State’s Early Social Interaction Project. The evaluations involve assessment of the child’s symptoms, cognitive functioning, adaptive behavior skills, academic achievement and functioning during unstructured play.

“It has been incredibly rewarding to see how well children and their families are doing and to witness their progress,” she said regarding the evaluations. “I enjoy clinical research because it involves collecting data from actual children with autism, while providing a service to the families we are studying and learning from.”

Guthrie has also been awarded the 2013 Young Investigator Award from the Autism Speaks Toddler Treatment Network, a group that supports research studying behavioral interventions for children with ASD.

In 2012, the International Society for Autism Research awarded Guthrie with a Student Travel Grant that enabled her to attend the International Meeting for Autism Research (INSAR). At the meeting, she made a comparison of factor structure models for toddlers with ASD from both the 4th and 5th editions of the Diagnostic and Statistical Manual of Mental Disorders, commonly known as the DSM.

“I attend the conference yearly in order to present my own research as well as to learn about cutting edge research being conducted by autism experts,” she said of the International Meeting for Autism Research.

Florida State’s Department of Psychology gave Guthrie a Graduate Research Development Award to honor her work. In addition, she has had some of her scholarly work published in various academic journals.

In 2013, The Journal of the American Academy of Child and Adolescent Psychiatry (JAACAP) featured Guthrie’s master’s degree research on the recent changes to diagnostic criteria found in the DSM-5, released in 2013.

In the future, Guthrie plans to pursue a university faculty position that will allow her to teach and conduct research. This research will allow her to not only contribute to the overall general understanding of ASD, but also help those who will be affected by the disorder in the future.

As for her ultimate goal, Guthrie hopes “to learn how to better intervene for children who are not showing optimal progress, so that all children with Autism Spectrum Disorder can reach their potential.”