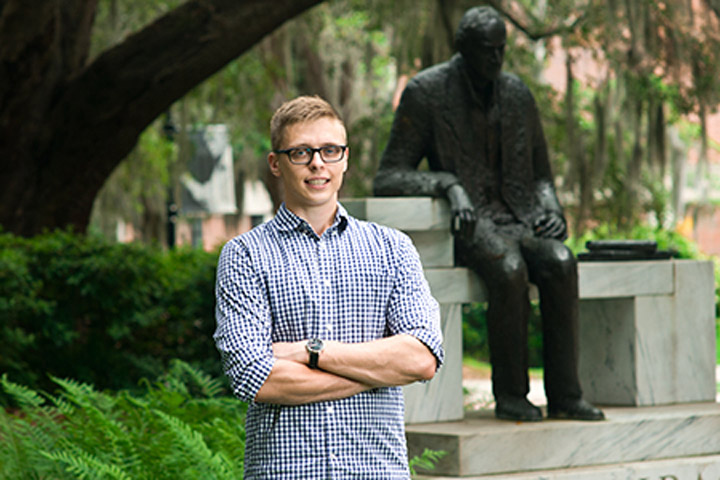 “deally, I would like to view myself to be an ambassador of science to the world — not just in terms of teaching at a university, but to be a beacon of scientific development in general.”

A leader in academics and undergraduate research, Ilya Piskun is dedicated to igniting the general public’s interest in science, and introducing them to the scientific way of thinking.

“As of now, there is a large gap in communication between scientists and the general public,” Piskun said. “My goal is to aid and improve existing efforts to make the understanding of science an integral part of everyone’s basic skill set.”

Born and raised in Russia for the first 15 years of his life, he decided to study chemistry at Florida State University, where he “instantly fell in love with the campus.”

After living in the United States for just three years before becoming a Seminole, Piskun proved to be the ideal incoming freshman. He was accepted into the Honors Program, where he “felt the responsibility to excel and to be an example to others since the first day at FSU.”

Piskun has maintained an impressive 3.94 GPA throughout the rigorous chemistry studies, so it’s no surprise that he became a part of the Phi Eta Sigma Honor Society as a leadership council member, and later as an execute board member.

“Ilya combines almost perfect academic record with the right qualities for developing into an outstanding researcher,” Alabugin said. “He is hard-working, focused, very bright and genuinely interested in science.”

Regarded as an inspiration, Piskun hopes to follow in Alabugin’s footsteps by becoming a science educator.

“He is a great mentor, and he knows how to motivate people to be excited about science,” Piskun said.

A year later, Piskun is now an UROP leader in training. In the fall of his senior year, he will teach a class to undergraduates on research methods and how to make the best of their undergraduate experience.

Described as the pinnacle of his undergraduate career so far, Piskun received the Atlantic Coast Conference Inter-Institutional Academic Collaboration (ACCIAC) Research Award for Summer 2014, where he is working with Professor Stephen Craig at Duke University for 10 weeks. They are researching cross-linking polymers and developing a new way to use mechanical stress to guide the polymer synthesis.

At Duke, Piskun also hopes to build connections with fellow scientists, some of them being the engineering community, as a way to efficiently develop concepts. “It is very important to have a large circle of peers to draw inspiration from, and to collaborate with,” he said.

His work will be presented at the Showcase of Undergraduate Research Excellence in the fall.

“Ideally, I would like to view myself to be an ambassador of science to the world — not just in terms of teaching at a university, but to be a beacon of scientific development in general,” Piskun said. “Teaching science is about getting the young minds excited about the world around us, connecting what we do in class to the outside world, and to learning not to take scientific advancements for granted.”