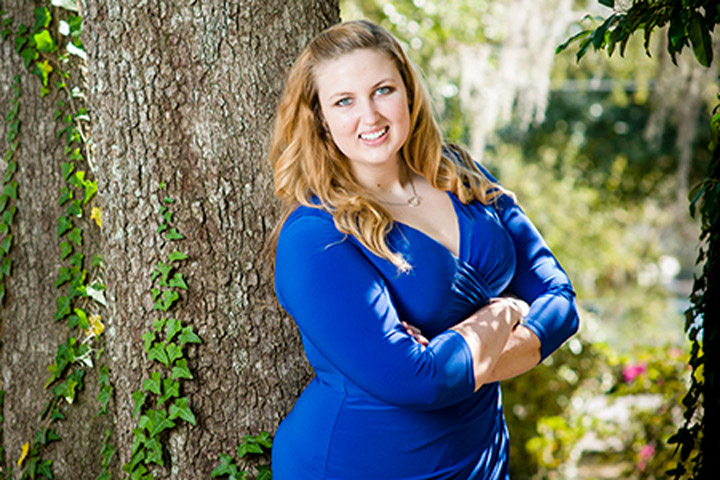 “I spend time trying to make others aware of the presence of sex, labor and domestic trafficking in the United States and abroad.”

Mary Rebekah Fritz was surprised to learn that the state of Florida has the third highest number of human trafficking cases in the nation and that even Tallahassee — the relatively secluded state capital that seems worlds away from such an ugly reality — has connections to the problem.

“A high-profile Tallahassee sex-trafficking case from 2008 led to the eventual dismantling of an international sex-trafficking ring,” said Fritz, a Florida State University senior in the College of Social Sciences and Public Policy. “There also are a lot of labor-trafficking cases throughout the Florida Panhandle.”

Thanks to decent people like Fritz, there is plenty of pushback against the work of human traffickers. Fritz is serving as this year’s vice president of Trafficked, a registered student organization at Florida State dedicated to advocating for victims and encouraging college students to learn about the issues and take action.

“With this organization, I spend time trying to make others aware of the presence of sex, labor and domestic trafficking in the United States and abroad,” she said.

Fritz also has been gratified to learn that the fight goes beyond the obvious areas of public policy and law enforcement.

“Our College of Motion Picture Arts has wonderful human rights initiatives, including screenings on trafficking during Human Trafficking Awareness Month this past January,” she said.

At Florida State, Fritz has participated in numerous activities that allowed her to become immersed in learning more about trafficking and other social injustices, as well as the changes to public policy that could alleviate them. For instance, she was able to attend the annual Florida Human Trafficking Summit in 2013 through a Knight Foundation Conference Stipend. She also spent time interning in the Tallahassee office of U.S. Sen. Bill Nelson.

“Anti-trafficking measures are what I am focusing on through my Social Science Scholars project, and this focus will help me further my career in the public sector,” said Fritz, who will be working with the Greater Orlando Human Trafficking Task Force to complete the project. “These activities have meant the most to me during my time as a student at Florida State to help me build a foundation for the type of career that I want.”

Fritz’s community service extends well beyond her interest in human trafficking. Through the Center for Leadership and Social Change, she volunteers regularly at the Big Bend Homeless Coalition’s Hope Community and has worked with the Damayan Community Garden Project.

In addition to her coursework, Fritz — who is a member of the university’s Honors Program — is working on an “Honors in the Major” thesis on the history of policy implementation and the role of social movements in the evolution and setting of public policy. She is working under the supervision of Florida State history Professor Maxine Jones, who praised her as a joy to work with.

“Mary Rebekah Fritz is a budding young scholar who has impressed me with her strong work ethic,” Jones said. “She thinks critically, welcomes constructive criticism and is a good listener.”

After graduation, Fritz plans to continue her Florida State education by earning a Masters of Public Administration degree and then attending law school. Afterward, she would aim for a position with the U.S. State Department’s Office of Legal Affairs.

“My ultimate goal is to run for public office to create and implement policies for social changes that I feel are needed within this nation,” she said.