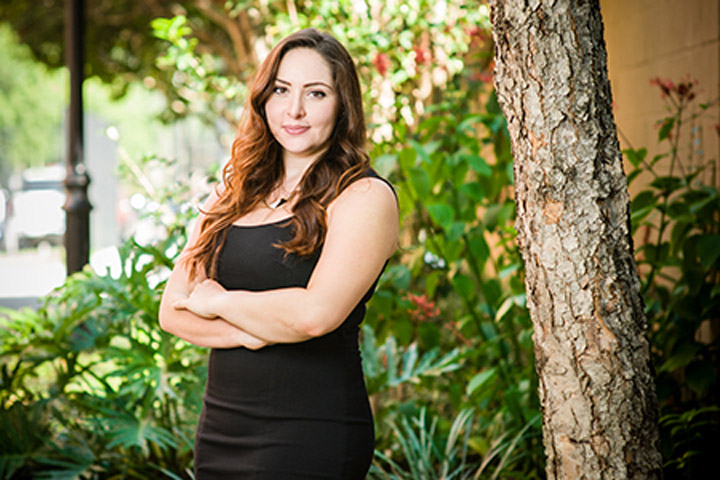 “My global engagement is motivated by my interest in global health and the medicinal practices of various cultures and regions.”

Dana Lev-Ran, who has treated herself to the expanded horizons that come only from living, studying and volunteering abroad, plans on using those experiences to full advantage as she works toward becoming a doctor.

Having emigrated from her native Israel to the United States with her family in 2003 at age 10, Lev-Ran’s time in this country has been something of a “foreign adventure” in itself. Now a senior at Florida State University, she can add internship and volunteer experiences in India, Ecuador and South Africa to her globetrotting résumé.

“My global engagement is motivated by my interest in global health and the medicinal practices of various cultures and regions,” Lev-Ran said. “Becoming a doctor for me would be doing something to empower people, to take control of their lives and their health and not be limited by an illness.”

Though she has yet to enroll in medical school, Lev-Ran sees a physician’s role as more than someone who merely prescribes medications, but establishes a “sincere connection” with the patient as a mentor, teacher and friend.

“I want to encourage preventive care and lifestyle changes that treat the root cause of the illness instead of prescription medications that simply alleviate the symptoms,” she said. “This approach to medicine is challenging but I welcome the challenge because at the end of the day, the patient lives a longer, healthier and happier life.”

As an undergraduate at Florida State, Lev-Ran is majoring in biochemistry to properly prepare for the rigors of medical school.

“I specifically chose this challenging major because if I can’t excel in this, then I really don’t have any business going to medical school,” she said.

But excel she has, landing on the President’s List in fall 2010, spring 2011 and spring 2013, and the Dean’s List in spring 2012 and 2013. She further distinguished herself academically by winning Florida State’s Katherine Blood Hoffman Scholarship for 2011-2012 and also has been inducted into the Phi Eta Sigma National Honor Society, the National Society of Collegiate Scholars and Golden Key.

She also has served as the leader of pre-med Freshman Interest Groups, helping to ease the transition from high school to college for many of her fellow Florida State students.

“I loved sharing my own experiences at Florida State, both achievements and mistakes, and I know in doing this that I am able to help my students explore who they are, reach their full potential and become well-rounded and active citizens in the community,” she said.

Lev-Rev currently is working on an “Honors in the Major” thesis, “Modeling Potential Energy Diagrams and Pressure Relationships with Water.” The project involves the building of devices that illustrate pressure and potential energy — devices that can be easily built by students in a shop class.

“Ultimately, the goal is to inspire a learning-through-doing approach in middle and high school curricula that encourages curiosity, problem solving, experimentation, exploration and deep engagement with the content,” Lev-Ran said. “The emphasis is on understanding the underlying science and the students have the opportunity to experiment, collaborate and solve problems.”

One of the biggest achievements of Lev-Ran’s college career is her record in applying herself well beyond the classroom and campus. She participated in two medical outreach clinics in Ecuador — the first in spring 2012 and most recently over spring break 2014. She completed a health and nutrition internship in India in summer 2013 and served as a volunteer at the Ann van Dyk Cheetah Centre in South Africa in summer 2012. These trips gave Lev-Ran a better understanding of cultural differences and how those effect interpersonal communication, which is crucial to the doctor-patient relationship.

“I am able to see situations and issues from more than one perspective and value the human experience and its diversity,” she said. “I learned that I can successfully adapt and cope in vastly different settings, and be more flexible and accepting.”

Lev-Ran’s initial desire was to devote her medical career to aiding seemingly helpless communities. It wasn’t until last summer on her trip to India that she realized that well-meaning international medical outreach is only one part of the solution.

“Establishing robust educational programs for underserved populations is crucial to addressing their medical needs,” she said. “An education-centered approach to global health provides communities with both preventive and sustainable healthcare.”

After she graduates in summer 2014, Lev-Ran plans on focusing her medical practice on either family medicine or emergency medicine.

“Three years ago I thought I wanted to specialize in neurology or cardiology, mainly because my grandparents specialized in those fields,” she said. “Regardless of what I choose, I know that my practice will be significantly influenced by global health and holistic medicine.”