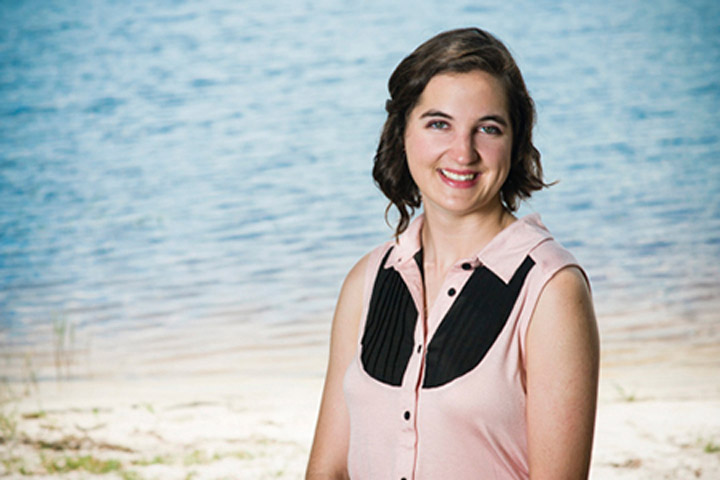 “I chose Florida State because of its program for biology majors to specialize in marine science research, and because I wanted to be part of the Women in Math, Science and Engineering living-learning community.”

The summer before she began high school, Kelly Vasbinder discovered her love for marine research at the Oceanography Camp for Girls offered by the University of South Florida.

“I had the opportunity to work with graduate students in a lab setting, go out on a research vessel for a day and learn about what different fields of marine science entail,” said Vasbinder, who later confirmed her interest while completing marine science internships throughout her high school years.

Today, Vasbinder is a Florida State University junior who is fully invested in the study of marine science as a career path.

“I chose Florida State because of its program for biology majors to specialize in marine science research, and because I wanted to be part of the Women in Math, Science and Engineering living-learning community,” Vasbinder said. “The community at FSU seemed supportive and encouraging.”

Vasbinder is currently conducting a research project, “Sponge Regeneration and Food Abundance,” that took her to the waters near Carrie Bow Cay, Belize, which is a field station of the Smithsonian Institution’s Caribbean Coral Reef Ecosystems Program.

“I’m studying how the amount of food available in the water affects the growth and regeneration rates of sponges in different habitats,” Vasbinder said.

Vasbinder received one of the university’s 2013 Undergraduate Research and Creative Activity Awards, which provided $4,000 toward the completion of the project. Her work is being supervised by Florida State biological science Associate Professor Janie L. Wulff.

When it comes to sponge ecology, Vasbinder calls Wulff an “amazing” mentor.

“She accepted me into her lab my freshman year,” Vasbinder said. “I have learned a lot from her.”

Part of the appeal of Florida State for Vasbinder was its Women in Math, Science and Engineering (WIMSE) program. Housed in a campus residence hall, the program gives female students a ready-made community of peers with similar academic interests.

“There were about 15 girls on our team and we raised over $1,000,” said Vasbinder, who has served as a captain or co-captain of Relay for Life teams for the past five years. “Learning how to get others excited about something that is important to you is a great lesson, and learning to have fun while you’re at it is important too!”

Vasbinder also has been involved with Florida State’s chapter of the InterVarsity Christian Fellowship.

“I co-led a small group that gave students a safe place to discuss their beliefs and study God’s word,” she said.

After graduation, Vasbinder intends to pursue a doctorate in coral reef ecology, fisheries ecology or marine resource assessment and find a job that combines field and laboratory work.

“I don’t know yet where I’ll end up, but even living just a few hours away from the water now has me longing to live closer, so it will have to be somewhere where the water is just a short drive away,” she said.