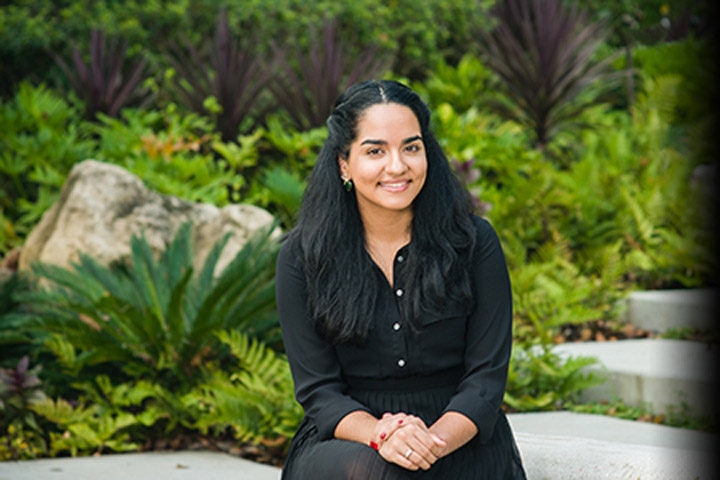 “We want to help foster engaged citizens who are ready and unafraid to change the world.”

Florida State University student Rosalia “Rosie” Contreras started her life in the U.S. the way many emigrants do, humbly. Her parents, medical professionals in their native Cuba, emigrated here after the fall of the Soviet Union when Rosie was just two years old. They took menial jobs to launch their new life and give opportunity to their children. Their fearless dream of a better life for their children came true.

Their daughter, now student body president and Board of Trustees member at this pre-eminent Florida university, has garnered praise all the way up to the president’s office.

“Rosie Contreras is a natural leader and she has already had a substantial impact at Florida State,” said President Eric J. Barron. “Her talent, intelligence, drive and creativity have been evident as she has served on the Board of Trustees, and I enjoy working with her. She is another example of the exceptional leaders we have been fortunate to have leading our Student Government Association, and I know she will achieve any goal she pursues.”

How did she do it?

“I dedicated myself to things I thought I could add value to and that were important to me. Not because it sounded good or to enhance my resume,” Contreras said.

She has added value to quite a few organizations and causes. She was the director of the Hispanic/Latino Student Union last year where she was able to see the successful implementation of academically focused programming such as El Centro Dialogues, Grad School Workshops and faculty appreciation events that created a direct link between Latino students and Latino faculty at Florida State. She also has worked to improve the retention rate of Hispanic women, who have the lowest rate across all demographics.

Contreras also has added value as a student senator, a public policy intern and a board member of the Office of Governmental Affairs. Her hard work has resulted in various awards and recognitions, including being named the 2013 Student Government Woman of the Year and a 2012 Seminole Torchbearer, and receiving the 2012 Milton S. Carothers Ethical Courage Award and the FSU 64th Student Senate Ethics Award.

Another of her many accomplishments has been recognizing the importance of promoting scholarship and dedicating student government resources to the cause.

Contreras is doing research through her Honors in the Major thesis on political dissidence in post-revolution Cuba.

“As an administration, we have learned that if we can use our resources to invest in student innovation and creativity, we have supplemented and bolstered the education of our students in a way that no other university has, or can. Ultimately, we want to help foster engaged citizens who are ready and unafraid to change the world,” Contreras said.

“Rosie stands out among student body presidents for her efforts to direct the resources of the Student Government Association to enriching the academic quality of FSU. She has inspired her fellow students to become better scholars and more engaged students — not only by developing new programs, but by leading by example,” O’Shea said.

Her research and achievements are of critical importance for the next leg of her academic journey. She has applied as a Fulbright Scholar to teach English in Spain before tackling graduate school, but won’t know if she has won until January.

“The qualities we look for in an ideal Fulbright applicant include high scholastic achievement, strong community involvement, a developed sense of ambassadorial prowess, and engaged leadership abilities. Rosie Contreras embodies all of these characteristics to the fullest extent,” said Craig Filar, assistant dean of Undergraduate Studies and director of National Fellowships at Florida State.

Contreras plans to travel throughout Latin America after graduation and hopes to focus much of her travels on Cuba, exploring the country from coast to coast. She is currently considering master’s programs in Latin American history/studies at the University of Chicago and Yale University, and wants to combine this with a Master of Arts in public policy or international development.

Until that time, Contreras has her hands full with the pressing concerns of her presidency.