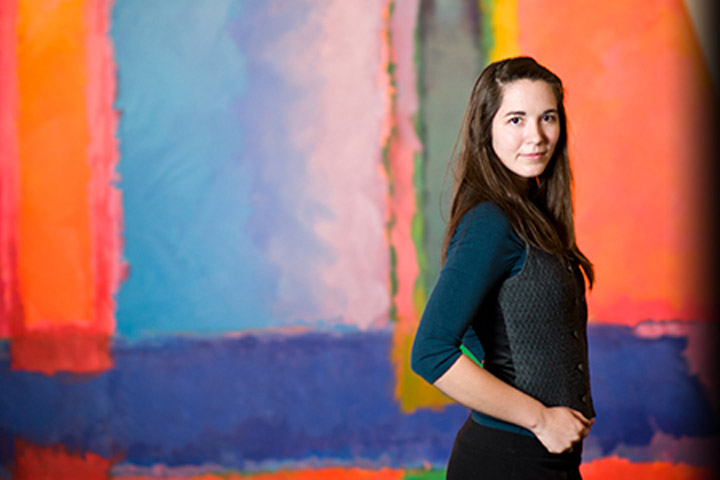 Florida State University senior Lauren Hlubny is one of those energetic types it’s difficult to keep up with.

The senior double major in theater and anthropology (don’t forget the minor in museum studies) is focusing on performance as research. She’s also a doer. For example, her Ocala, Fla., high school didn’t have a theater program. Hlubny petitioned for a program and got enough signatures for the school to create a department and hire a drama teacher.

Hlubny then served as president of her high school’s new drama club until she graduated.

“It was the theater department that brought me here,” she said of Florida State. While in high school she visited a friend on campus and saw a university production of the musical “Rent.” Hlubny was very impressed.

When she enrolled, Hlubny found she wasn’t as prepared as her fellow theater majors, who had participated in drama for many years.

“I don’t fully grasp a lot of theater concepts,” she said. But she caught up to her peers quickly thanks to the theater department’s hands-on approach.

“Our theater program allows that to the extreme.” Plus, Hlubny put in a lot of extra time, she said.

Now, years later, Hlubny is known for her experimentation.

“I’m known for being passionate about experimental theater.” She’s participated in more than a dozen shows during her time at Florida State, which is a lot for an undergraduate.

She’s currently directing a 25-minute movement piece exploring the work of Spanish painter Salvador Dali, to be performed in January at the Dali Museum in St. Petersburg, Fla.

“The ending was different every time,” Hlubny said of rehearsals. “It’s a Surrealist piece, so it needs to be crazy.” She’s enjoying the exploratory rehearsals because they present a new challenge.

She is also creating a theater piece about the Kennedys titled “Jack et Jackie” to premiere at the American Society for Theatre Research conference in Dallas in November. Hlubny and her acting partner will perform for the very people who write Hlubny’s theater textbooks.

Her strong support system at Florida State encourages these creative productions to come to life, she said. The university environment allows for resources, studio space, grants and helpful faculty and fellow students.

But Hlubny has been doing more than playing. She chose Florida State also for the opportunity to study abroad, which she’s done twice, first in Paris (Hlubny is a Francophile) and later in London (a common destination for theater majors, she noted).

She was granted an Undergraduate Research and Creative Activities Award by the Office of Undergraduate Research. With this funding Hlubny last summer began her research project on performance in museums. She was, and will continue to be, mentored by Kris Salata, associate professor in Performance and director of the Bachelor of Arts program at the School of Theatre.

Salata studies performance as research, “which is amazing to me,” Hlubny said. Salata teaches stage directing, performance and theory courses and has allowed Hlubny to take his graduate directing seminar.

“Lauren matches academic excellence with a remarkable leadership in her community, or rather several communities: of honors students, scholarly researchers, artistic researchers, double majors, theater makers and movers-and-shakers of different sorts,” Salata said. “One day she might run a theater company or run for an office, direct plays or direct a theater department. But whatever she will choose, she will do wholeheartedly and beautifully.”

Hlubny was also named an Undergraduate and Research Opportunities Program leader. This semester and next she is teaching a colloquium on arts research for undergraduate students.

In preparation for graduation Hlubny is writing letters to theater companies around the world, letting them know of her interest in performance as research and volunteering her time and talents to get more hands-on training. She can foresee going to graduate school in the future, as well.

“I’m going to go where the best opportunity is.”

If tradition holds, Hlubny will create opportunities for herself.