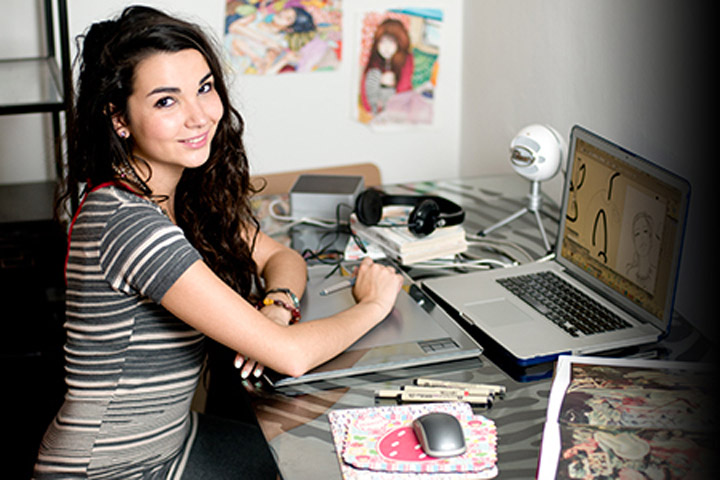 “There's always the argument that digital art isn't fine art, so I'm trying to make it more so by playing with high- and low-brow mediums.”

“It’s an appearance thing,” said the digital media major, who developed a skillset for drawing at a young age. “People say, ‘Oh, but you look like a normal girl.’ Well, what does that mean?”

One of few women in her field, Weissbrot likes to say she is “infiltrating” traditionally male spaces in digital media.

Weissbrot received funding through an Undergraduate Research and Creative Activity Award (URCAA) to create a 50-page digital creation called “Maybe She Likes It: A Web Comic Exploring Internet Technology and Gender Equality.” The comic, which incorporates themes of technology, evolution and sexuality, was one of many undergraduate presentations on display at the Oct. 1 Showcase of Undergraduate Research Excellence at Florida State.

The project depicts a girl’s development as part of the millennial generation, the first group to grow up with Internet during adolescence. A millennial herself, Weissbrot says the goal of “Maybe She Likes It” is to narrow the double standards she’s noticed between men’s and women’s sexuality.

To create the digital images, which were largely influenced by anime, she used a unique creative process. She skipped sketching and first wrote a plot, then drew based on pictures of herself and friends to capture poses. Next, she found images online to incorporate, and compiled them into Photoshop. After printing, she added watercolor by hand, using color schemes of black and red that mimic the violent, primal nature of prehistoric art.

“There’s always the argument that digital art isn’t fine art, so I’m trying to make it more so by playing with high- and low-brow mediums,” Weissbrot said.

Weissbrot distributed the Web comic online and at Dragoncon, the world’s largest fantasy and science fiction convention, alongside her URCAA supervising professor, Carrie Ann Baade. Baade said in 14 years of teaching at the college level, she has never encountered a student like Weissbrot.

“Lena is an original,” said Baade, an assistant professor of painting and drawing at Florida State. “She knows what she wants and is able to work well with our faculty to reach her objectives. I have spent a few moments being shocked and then awed by every project she has worked on at FSU. She handled her research ambitiously and returned beyond what I thought someone of her age and experience was able.”

“The way the text is presented, it’s treating girls and guys like aliens to each other who can’t interact on the basis of honesty,” Weissbrot said of the game, which allows males characters to click on women to date them.

In her three years at Florida State, Weissbrot has been on the Dean’s and President’s lists and is a member of the Art Students League. Weissbrot’s art and gaming projects have been displayed at art venues like Railroad Square, First Friday and Gallery 621. She also was the featured artist for January 2013 Art Scene Zine, a monthly art publication run by FSU students.

When she’s not creating art on the computer, Weissbrot is pursuing her other passion — rap. She says she is drawn to rap for the same reasons she’s drawn to digital art. To her, the genre is known for its misogynist undertones.

“One of my favorite lines in my raps says it all: Misogynists massaging this because they cannot process it,” she said.

“Having your hobby be your full-time work is the most awesome thing,” she said. “I just want to be in a position where I’m working with other creative people who have complementary interests.”