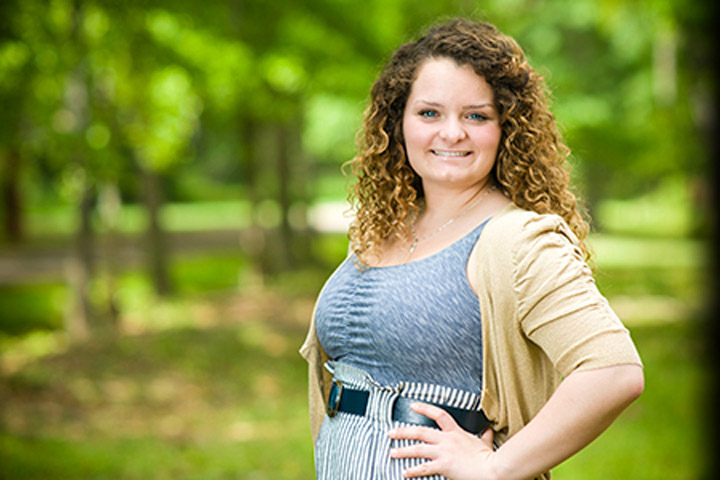 “I want to be a part of finding out how mental disorders work and help to better the lives of people coping with them every day.”

Carlie Hoffman has friends and family who struggle with various forms of depression and bipolar disorders, and has witnessed firsthand their debilitating effects. Now the Florida State University senior is conducting undergraduate research aimed at finding better pharmacological treatments to lead people from the dark interiors of their minds into the light of good mental health.

“I have unknowingly grown up around and been influenced by mental disorders my entire life,” Hoffman said. “I want to be a part of finding out how these disorders work and help to better the lives of people coping with them every day.”

Hoffman is working in the lab of Professor Debbie Fadool of the Department of Biological Science, and Assistant Professor Wally Boot and Associate Professor Michael Kaschak of the Department of Psychology. Fadool has allowed Hoffman to mold her research, part of her Honors in the Major thesis project, to better align with her interests.

“Carlie is really a self-starter and observative young scientist,” Fadool said. “While we were characterizing behavioral phenotypes in a transgenic mouse line in our laboratory, she noticed that the mouse had high activity levels and wanted to explore whether it would be a good research model for ADHD. She took it upon herself to design testable experiments from the literature, have the new behavioral apparatus built in our engineering shops, and screen whether these mice could be modulated by two ADHD drugs currently on the market. It will be interesting to see what she uncovers and if these mice could help researchers explore the molecular basis of hyperactivity and how this impacts the sensory and learning aspects of brain function.”

Hoffman’s work has brought accolades and awards. She was recognized as an outstanding Chemistry II student in the spring of 2011 and has maintained a 4.0 grade point average every semester. Through the Beta Beta Beta (TriBeta) organization, she has won second place in a group competition in Puerto Rico in 2012 presenting research done in Fadool’s lab and in an individual competition in 2013. TriBeta is a national honorary and professional fraternity of undergraduates dedicated to improving the understanding and appreciation of biological study and scientific research. Hoffman was awarded a research grant from the group for her honors thesis work.

“Carlie is the type of person we want our students to become. She is a critical and innovative thinker, but also is someone of character who deploys her talents to help others,” O’Shea said. “Carlie serves as an Undergraduate Research Opportunity Program (UROP) leader. In that capacity, she leads a research-focused colloquium and is a mentor and role model to a group of first- and second-year students serving as research assistants to faculty. She understands the challenges that students face and guides them in their journey to become scholars.”

Besides her research, Hoffman also was recognized as the top volunteer of the year in FSU Hands of Hope for the 2010-2011 academic year. She has served as an introductory biology teaching assistant in fall of 2012 and the spring of 2013, and will serve as a teaching assistant for biology II for the next two semesters.

After graduating, Hoffman plans on continuing in her research to bring people into the light.

“I plan on pursuing a career in neuropharmacology with the goal of researching the neural effects, causes and treatments of neurological and psychological disorders,” she said. “I will either conduct research for industrial drug companies or research and teach in a university setting. I am mainly interested in the neural effects and treatment of psychological and neurological disorders and thus hope to find a career pertaining to clinical drug trials or medical research. I plan on obtaining a doctorate in neuroscience and plan on further refining my independent science skills in either a postdoctoral fellowship position or a teaching position following my doctoral degree.”