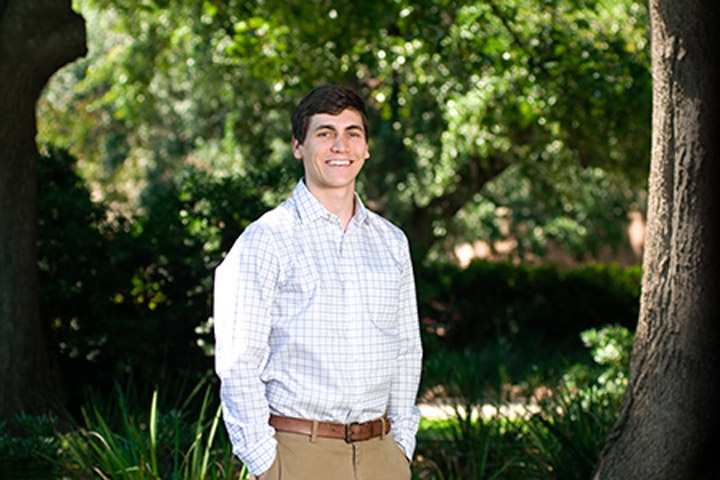 “I want to shed even a miniscule amount of light for children who are stuck in a position that seems hopeless.”

Florida State University senior David Cromer has found the best way to break down barriers of race is through a practice as old as time — sitting down to a shared meal.

“I come from a place of concern, desperately wanting gaps to be bridged,” said the 24-year-old social work major. “There’s plenty of scientific research that says when you bring people together and they share a meal, it’s unlikely they can be upset.”

Cromer put the age-old theory to practice over the summer of 2013 with his own study in which young adults of different races sat down over a meal, discussed controversial race-related topics and performed community service together. The project was enabled by a Florida State Social Work Undergraduate Research & Creative Activity Award (SWURCAA), which provides a $4,000 stipend for conducting summer research.

“We brainstormed about what people’s perceptions of race are, how they’re affected, and asked if the topic was even something people notice,” Cromer said. “It turned out to be an inviting, open environment for them to talk about sensitive subjects.”

Cromer’s research supervisor and associate professor of Social Work, Stephen Tripodi, said Cromer stood out in his research because of his “passion, intellect and openness to change.”

“David is incredibly intelligent and sophisticated, particularly for an undergraduate student, and uses this intellect and passion to do what he can to understand racism in general and improve race relations with research participants here at FSU in particular,” Tripodi said.

In fact, Cromer’s dedication to social justice started early in his undergraduate path at Florida State. He quickly became involved with NAACP FSU, Caribbean Students’ Association, and the Black Student Union, hoping to challenge social stigmas by working together with different races.

“I do all this to say maybe someone will be impacted or say there is one less barrier between white and black,” said Cromer, who has also volunteered at a local high school as a tutor and joined DUF, the Florida State Men’s Ultimate Frisbee team.

Tackling issues concerning race wasn’t always Cromer’s career goal; he used to think he’d work for a faith-based organization. Before he came to FSU, the Gainesville native had already graduated with a Bachelor of Science from the University of Florida. It was only when he started working for a St. Petersburg, Fla.-based homeless shelter for children that he realized he was meant to be a social worker.

“I fell in love with how the employees interacted with clients and their profession in general,” Cromer said. “I realized I had to go back to school because I knew that’s what I wanted to do.”

While at the shelter, Cromer worked mostly with young children whose pasts were plagued with emotional and physical abuse or neglect. One young girl he met at the shelter had a life-changing experience and ended up writing an article about Cromer in the United Way magazine.

“She said what changed her mind — what really put her over the edge of understanding she needed to have a life change — was my input to her,” Cromer said. “That had an impact on me because I want to shed even a miniscule amount of light for children like that who are stuck in a position that seems hopeless. In reality, there is hope.”

After graduating with his second bachelor’s degree, Cromer hopes to attend graduate school at the University of Pittsburgh and to work with children in urban schools.

“I want people to say simultaneously, ‘Not only are we all one human family, but we’re also extraordinarily different, and each of those backgrounds and cultures needs to be respected,'” Cromer said.