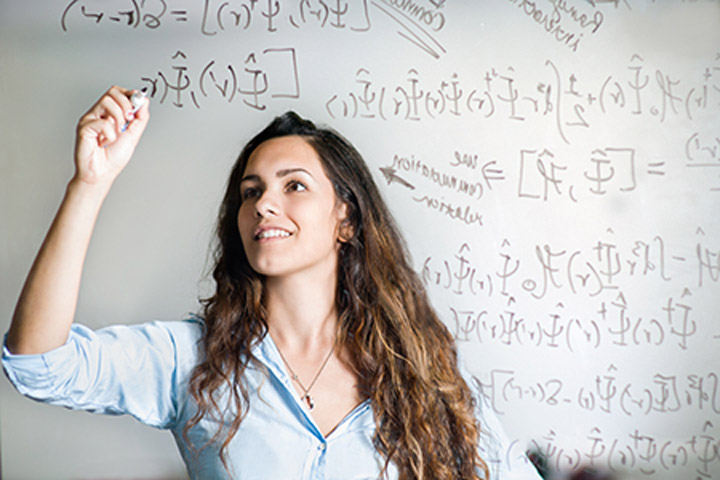 “Scientists spend their lives climbing mountains. We may never make it to the top — we may never find a complete description of the universe — but the climb gives us a new perspective on the world.”

When it comes to conducting undergraduate research, Kelly Pawlak has shown herself to be ready for the most intellectual of challenges.

“I encourage my friends and classmates to get into research because I’ve had such a wonderful experience,” said Pawlak, who has been investigating a concept in condensed matter physics known as Bose-Einstein condensation, which relates to a particular type of particle called a boson. Because some atoms have even numbers of constituent particles — protons, neutrons and electrons, which all carry ½ spin and thus have integer spin — they are considered bosons. But not all bosons are atoms; some do not have protons, neutrons and electrons.

“Because bosons, under the correct conditions, tend to exist in the same state, Bose-Einstein condensation is a really counter-intuitive phenomena,” Pawlak said. “As an example, we can imagine a set of 100 ordinary/classical two-state particles to be a set of 100 typical coins. You could flip the set of ‘normal particle’ coins repeatedly, for an astronomical length of time — say the age of the universe — and very probably never have all of them come up as heads. However, if the 100 coins represent bosons, the chance that all of them would come up heads would be about one in a hundred.”

Because of this bizarre statistical property and other strange behaviors that arise from the nonlinearity of the system, the Bose-Einstein condensate can be useful to science and warrants study, according to Pawlak.

As evidence of the outstanding research she has conducted so far, Pawlak was one of four undergraduates who attended the Eighth IMACS International Conference on Nonlinear Evolution Equations and Wave Phenomena, a large gathering of leading mathematicians and physicists. She made a presentation on her research, “Random Stability in Nonlinear Media: An Investigation of Bose-Einstein Condensates.”

“My talk was during the first day and the entire time leading up to it was absurdly nerve-racking,” she said. “After a few minutes went by, I forgot that I was even giving a talk, and the rest went smoothly. At the end, a few professors approached me and complimented me on the presentation, which really set the tone for the rest of the conference for me.”

Pawlak called her experience at the IMACS conference “great.”

“I learned a lot about current topics in applied mathematics,” she said. “I think every undergrad interested in academia should attend a conference.”

Ziyad Muslimani, an associate professor of mathematics who has been supervising Pawlak’s research, described her as “bright, creative and hard working.”

“The first thing that caught my attention while working with her was her strong drive for success and passion for research and discovery,” Muslimani said. “She invests tremendous amount of energy in thinking about the problem she is trying to solve and never gives up!”

Based on the strength of her research, Pawlak received a 2013 Undergraduate Research and Creative Activity Award from Florida State. The award consists of a $4,000 stipend.

“The URCAA money freed me from the obligation of working over the summer, which led to a lot more time for me to concentrate on my research,” she said. “Also, some of this money has gone towards equipment and software for the computational part of my project.”

In addition to the URCAA, Pawlak is the recipient of an Honors Thesis Award.

“My thesis project is very broad in scope at the moment, and encompasses both the above project and another manuscript being worked on,” she said. “They are both related to Bose-Einstein condensates and are both investigations into the field of nonlinear dynamics.”

During her final year of high school, Pawlak was talked out of pursuing physics in college. She began her college career at Florida State as an engineering major, but the coursework didn’t click with her interests. After flip-flopping around the sciences, came back to physics full force.

“Since changing majors, school has been a lot less stressful. I’m finally doing what I really want,” she said. “I am actually surprised that my GPA has increased since switching!”

After graduation, Pawlak plans to pursue a doctorate in physics and become a tenured faculty member at a strong STEM school, conducting original research in condensed-matter physics and mathematical physics.

“Scientists spend their lives climbing mountains,” she said. “We may never make it to the top — we may never find a complete description of the universe — but the climb gives us a new perspective on the world.”