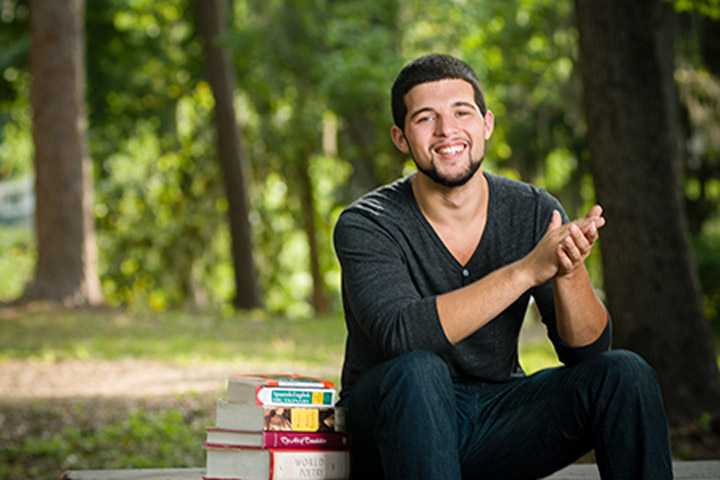 “All of my professors have been very helpful and generous with their time. They are honest about my work.”

Daniel Ruiz sees the beauty in words and in life. The Florida State University creative writing major studies the implications and uses of words in everything from classic poetry to modern rap music. Quotes from them are sprinkled throughout his conversations and he constantly has a song “stuck in his head.” A veritable walking encyclopedia of poetry, he expresses his contagious optimism through snippets of famous and obscure works.

His love of words goes back to elementary school where he used to write stories using the weekly vocabulary word lists. However, it was an over achieving friend in high school that made Ruiz get serious about his writing. While discussing the future, his friend “chewed him out” over his complacent attitude toward school and challenged him to prove his mettle. Over the next six months, Ruiz read scores of books on writing and worked continuously on a book of his own. At the end of the six months he had two things, an 80,000-word book and a renewed love and interest in writing.

At FSU, his love of writing has found the best possible home, the Creative Writing Program.

“All of my professors have been very helpful and generous with their time. They are honest about my work,” Ruiz said. “All of them are great writers and great teachers. It’s tough to find that.”

One of his professors, David Kirby, associate director of the Creative Writing Program and Robert O. Lawton Distinguished Professor of English, inspired a love of poetry in Ruiz, and has high praise for his student. Ruiz won a Literati Undergraduate Creative Writing Award in 2012 from the department.

“Daniel Ruiz has more smarts and ambition than three ordinary people; more than that, he has a king-sized love of nonsense. Some days, I’m convinced that he’s been sent from the future to save mankind from itself. He’s the kind of person people expect a lot out of, but I just enjoy him in the here and now,” Kirby said.

That sentiment is echoed by the director of the Creative Wring Program, James Kimbrell.

“What I had suspected from his comments during and after class was confirmed when he began showing me his poems: he is exuberant, intelligent, funny, ambitious and provocative both on and off the page. He just returned today from South America and came right to my office with a batch of his own translations of Jorge Luis Borges, Jose Marti, Octavio Paz and Cristina Peri Rossi. He makes this work fun and his excitement is contagious. It’s a real pleasure watching Daniel develop as a poet and a translator,” Kimbrell said.

Ruiz studied in Uruguay and Argentina, South America thanks to an Undergraduate Research and Creative Activity Award (URCAA). Although Ruiz’s first language is Spanish, he moved to the United States at an early age and lost much of his Spanish. His opportunity in Uruguay was a chance to reconnect with his first language and study and translate the greats of Latin American literature.

This fall, Ruiz will be sharing what he has learned as he teaches a Creative Writing Freshman Interest Group (FIG). A FIG is a pre-packaged cluster of high-demand freshman courses linked by a theme or academic program, in this case, creative writing. He also will help fellow writers as the poetry editor of the Kudzu Review, a student-produced literary journal that gives the undergraduate students of Florida State a place to share their creative works.

As for the future, Ruiz hopes to receive a Fulbright Scholarship in order to study poetry at Queens University in Belfast, Ireland, and by “sharing all of the wonderful things I’ve found at FSU with as many people as possible” as he continues his studies in graduate school. Whatever his future holds, he will retain his love of words and life. A line from one of his favorite poems, “Steps” by Frank O’Hara, seems to sum up his attitude:

“the Pittsburgh Pirates shout because they won
and in a sense we’re all winning
we’re alive.”