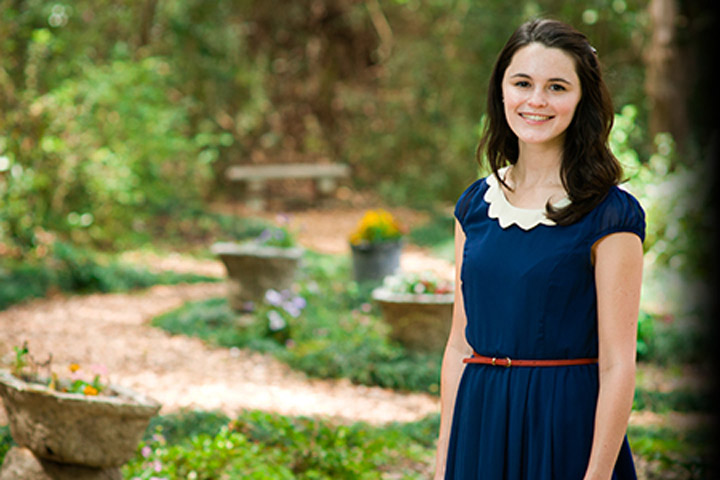 “I want to work as much as I can with things I'm passionate about so I can actually make a difference.”

In a world currently riddled with economic crisis, nations have concentrated on stabilizing their own fiscal flux. One bold scholar is motivated to shift the efforts to aid a region torn apart with economic, political, and social issues — the Middle East. Meagan Bean’s concern for other nations came to life as she began her courses during her freshman year at Florida State University.

“I had a huge curiosity about the Middle East, so I starting reading and researching on my own,” Bean said, “and when I took Middle Eastern History my first semester, I just loved it.”

From then on she seized every opportunity to gain more knowledge, pursuing a major in Middle Eastern studies with a focus in history while taking up a second major in international affairs with concentrations in political science and economics.

Zeina Schlenoff, a professor of Arabic in the Department of Modern Languages and Linguistics, described Bean as “disciplined, determined and highly motivated.”

Bean’s interest in learning about other cultures abroad was first sparked while she was a high school student traveling through Europe. Once she enrolled at Florida State, Bean participated in study abroad in Istanbul, Turkey, through the university’s International Programs in 2011, followed by study abroad in Beirut through an exchange program of the Lebanese American University in 2012.

“In the classroom, they tie it up in a nice bow for you saying, ‘These are the problems,’ and it’s manageable to understand,” Bean said. “But then you actually go there and you see that people have to live with these issues, and it is a lot worse than they make it seem. I think that sparked my passion for the Middle East … it’s a whole new challenge for me to work there.”

Bean earned FSU’s Scholarship for International Studies for both of her study abroad experiences. Her dedication to acquiring fluency in Arabic while abroad and in courses at FSU earned her distinguished recognition in 2012 as “Outstanding Student in Arabic” for the Department of Modern Languages and Linguistics.

“For someone interested in international relations, there is nothing more important than learning languages and going abroad,” said Dale Smith, chair of Florida State’s Department of Political Science. “Meagan took great advantage of the opportunities offered by Florida State to do both.”

From learning to speak, read and write Arabic, to acquiring the tools to make a difference in the community, Bean’s time at Florida State has been exceptionally productive.

“My goals are really important to me,” she said. “I want to work as much as I can with things I’m passionate about so I can actually make a difference.”

Now concluding her undergraduate career in Florida State’s Honors Program, Bean has been recognized in many areas of social service and academia. Earning consistent President’s and Dean’s List acknowledgments since her first semester, Bean has maintained a strong GPA and has gained membership to several of Florida State’s most prestigious academic honor societies.

Bean was selected to become an honors delegate, representing the Honors Program to recruit prospective Seminoles. Her commitment to guiding other students led to her activities mentoring freshman honors students in conjunction with the Honors Student Association. Bean also pursued the role of Freshman Interest Group leader for the Social Justice FIG.

This accomplished humanitarian also has served as issue chair for the Homelessness in Florida room in the With Words exhibit, located in the Center for Leadership and Social Change. While serving as community outreach facilitator for the center, Bean has greatly contributed to the Big Bend Homeless Coalition’s HOPE Community.

“I am able to help an underserved population of children experiencing homelessness,” Bean said. “I am also able to educate my volunteers about the issue of homelessness in Tallahassee and inspire them to become more involved in service.”

Bean prides herself on having jumped in every fountain on campus and enjoys attending the movies at the Askew Student Life Center in her free time. If she were stranded on an island, Bean says she would bring Chap Stick, sunblock and any book. She plans to reread the entire Harry Potter series over the summer.