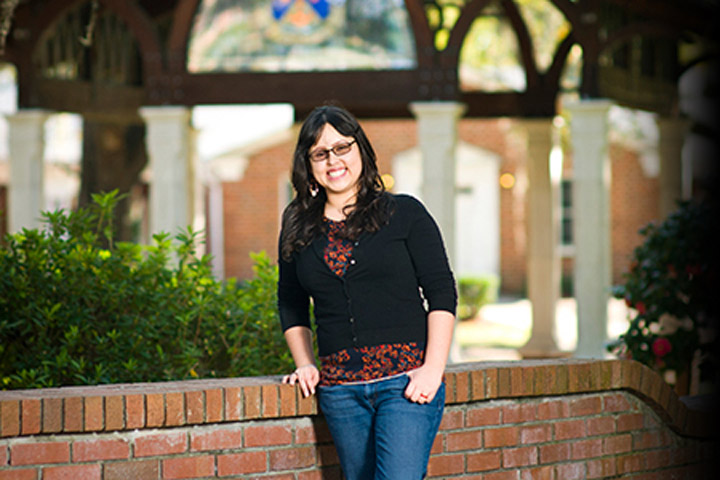 “I have so much faith life is leading to something really big, and as long as I keep serving I'll get there.”

For most students, a full ride at New York City’s Parsons School of Design — made famous by Lifetime’s “Project Runway” — would have been a dream come true. But for Taylor Adams, one year into her studies, there was unfinished business back home in Florida.

As a young child, Taylor was diagnosed with a serious soft tissue cancer that kept her in the hospital for over a year. There was a bright spot, however.

Over three summers during her childhood, Adams attended Camp Boggy Creek in Eustis, Fla. Founded by the late actor Paul Newman, the camp offers one-week programs to “enrich the lives of seriously ill children and their families by creating a life-enhancing camp experience.” At Boggy Creek, Adams could feel like “any other kid.”

“As a child with cancer, Boggy Creek provided community to children facing similar challenges,” Adams said. “We were all bald, all on chemo, and at camp this was normal.”

At age 8 and a half, her cancer went into remission, which allowed her to lead a much more normal life. She put memories of camp out of her mind until she was just about to graduate from high school. With a newfound urge to find out more about the camp, she returned to Boggy Creek that summer as a trainee and was hooked. She would go on to be a counselor there.

“Returning to camp at 17 changed my life,” Adams said. “It was the first time I had ever talked about leadership, and it was also the first time I experienced how fulfilling service could be. That one week as a leader in training set my whole life in another direction.”

Afterward, Adams transferred from Parsons to Florida State University so she could work at Boggy Creek during her summers.

It was at Florida State and Boggy Creek that she honed her teaching and leadership skills.

“After arriving at Florida State, I felt very inspired by the diverse student initiatives and opportunities available to me,” Adams said.

Adams became intricately involved with the Center for Leadership and Social Change. Working with Director Laura Osteen and Community Engagement Coordinator Jillian White, Adams has taken community service to a new level. Logging more than 1,600 service hours, she has served in several organizations and causes while maintaining a 4.0 GPA. Through her connection to the center and other campus organizations, she has traveled extensively and received an Office of National Fellowships Social Entrepreneurship/Leadership in Public Service Moellership, which allowed her to travel to Cambodia.

“Taylor served with local programs, such as Jumpstart and Relay for Life, national programs, such as Camp Boggy Creek and Operation Breakthrough, and international organizations, including Global Visions International in Mombasa, Kenya and the Cambodian Children Against Starvation and Violence Association (CCASVA) in Phnom Penh, Cambodia,” White said. “She is adept at balancing the macro and micro views of social issues, and looking at how her service experiences compare to scholarly literature and what she has learned in her courses related to economics, policy and leadership.”

“Through her travels, Taylor has practiced and learned the art of patience, flexibility and emergence,” Osteen said. “She seeks to understand what is happening around her instead of seeking to validate what she expected to see.”

Adams is particularly proud of one particular program, the Spiritual Life Project, which she began at Florida State with faculty guidance. It is a focus group of faculty, staff and students seeking to explore religion and spirituality for the purpose of enhancing meaning, purpose and authenticity in life. The program recognizes that students develop spiritually within, across and outside of religious faiths, through both solitary and social means, and seeks to facilitate that development. The program is a legacy to Adams’ time at FSU.

Her legacy established, Adams is looking toward the future. As a recipient of a Fulbright Scholarship, the future is bright.

“Moving forward, I want to keep learning and growing,” Adams said. “I have so much faith life is leading to something really big, and as long as I keep serving I’ll get there. I always say that I don’t know what I want to do because my job hasn’t even been created yet.”

She hasn’t forgotten her formative years at Boggy Creek however.

“Boggy Creek is my foundation,” Adams said. “No matter how far I am from camp, or how much time passes, it has informed my values, who I want to be and the types of relationships I want to have.”