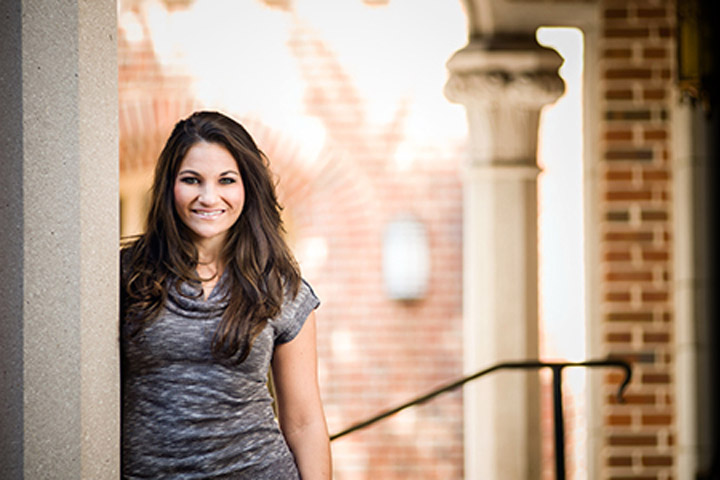 “I aspire to … remedy heinous acts of crime and injustice in trafficking networks and fight for human rights to make the world more safe and secure for all people.”

When revolution rocked the Middle East during the Arab Spring in 2011, Florida State University international affairs student Lexia Arther was in Rotterdam, Netherlands, as an exchange student. The event, which tested the mettle of the European Union, intrigued Arther. It gave her a special interest in the security and border policy of the European Union, which she went on to research during her studies at Florida State.

“I was highly intrigued by the concept of the European Union — the fact that 27 different cultures, different languages, different backgrounds all worked together as one unit,” Arther said. “It fascinated me, from a diplomatic standpoint, how countries so different were able to align their goals and work together fluidly to forward their nations individually and collectively as a stronger international body.”

Arther also developed an interest in the Schengen Agreement, which abolished border controls between participating member states in Europe. As the Arab Spring heated up, the question became, “Who is in control of a country’s borders if they are a member of the Schengen zone?” As Italy took matters into its own hands by issuing visas to refugees that allowed them to travel freely throughout the rest of the Schengen Zone, it was a wake-up call for the European Union member states — perhaps the EU was not fully equipped to handle drastic changes in border control. The Schengen Agreement deals directly with how countries manage the four elements of illegal immigration, drug and human trafficking, and terrorism, all of which have become interests to Arther.

“I was astounded that my prior vision of the EU as a model for regional cooperation and international success was truly much more fragile when taking a closer, internal look,” Arther said. “I hope to focus my future research in graduate school looking specifically at how human trafficking networks and terrorist cells are directly related to the level of control at a country’s borders.”

Following her experiences in the Netherlands, Arther worked briefly as a global ambassador intern at Florida State’s Center for Global Engagement, where she gave presentations about her international experience and helped design exchange programs for FSU students. Furthering her international credentials, Arther interned with the Bureau of European and Eurasian Affairs, Office of Western Europe, for the State Department last summer in Washington, D.C.

As is the case with many excellent students, FSU was in competition to have Arther study here. She was torn between FSU and another top-notch university, but tours of the two sealed the deal for FSU.

“I remembered back to my FSU tour, how excited all the representatives and professors made me feel about what I could do at FSU,” she said. “Florida State was in the business of empowering me, challenging me to take risks, make mistakes, learn and dream.”

At Florida State, Arther has served as president of the Golden Key Honor Society and is a member of the Phi Beta Kappa and Phi Eta Sigma honor societies. She also is a member of FSU’s Garnet and Gold Scholar Society and was an alternate finalist for the Pickering Undergraduate Fellowship in 2012.

Arther worked with her mentor, Craig Filar, director of the Office of National Fellowships, to compete for the Pickering and other awards.

“It has been a great pleasure seeing the impact Lexia has made on our campus through her various positions,” Filar said. “She has combined her experiences in academics, leadership and service in a manner which is inspirational to me. Lexia will represent Florida State University well in her pursuit of a position within a government agency in which she can support U.S. security and human rights interests in the European Union.”

The summer following graduation, Arther is off again, thanks to the Ada Belle Winthrop-King Summer Undergraduate Scholarship. This time she will be traveling to France with FSU’s Intensive French Program to further hone her mastery of the language. She intends to spend the next year teaching English in France and continuing her research on immigration patterns and drug and human trafficking networks in Europe. She plans on getting a master’s degree in international security and to finish her studies with a doctorate in international relations. After that, she hopes to work as a foreign-service officer.

“I aspire to work in public service and academia,” Arther said. “I want to strive to better understand the causes of terrorism by bringing awareness to issues that threaten international security, as well as remedy heinous acts of crime and injustice in trafficking networks and fight for human rights to make the world more safe and secure for all people,” she said.