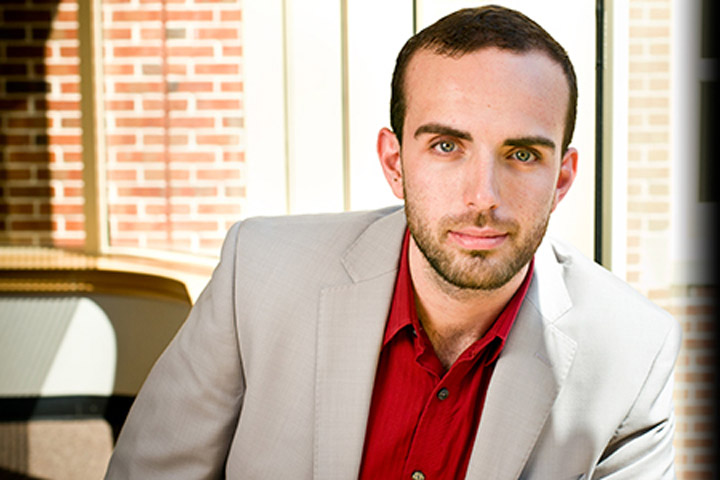 “I think that one of the crucial perspectives on the phenomenon of the digital revolution is a historical one.”

Today’s digital revolution isn’t the first to take the world of texts by storm. The formative years of printing in the Late Middle Ages and early Renaissance changed the way texts were produced, transmitted and received, and according to Florida State University senior Jacob Gibbons, has a correlation to the textual revolution of the 21st century.

“I think that one of the crucial perspectives on the phenomenon of the digital revolution is a historical one,” Gibbons said.

As the recipient of a Florida State Undergraduate Research and Creative Activity Award, Gibbons spent time during the summer of 2012 researching the history of media and the effects of the digital revolution in the Netherlands at Leiden University and the Dutch Royal Library.

“In Leiden, I studied the evolution of early printing,” Gibbons said. “Going to Leiden gave me a priceless opportunity to access primary resources. It is hard to find artifacts from that period in this country. Leiden University had a lot of texts that were very relevant to my research in its special collections.”

One of the texts that Gibbons handled in Leiden has since become the focus of his Honors in the Major thesis, which he began after returning to Tallahassee. In addition, one of the professors he met at Leiden University is now serving on his thesis committee.

Gibbons’ is writing his thesis, “From Rubrication to Typography: Die geesten of geschiedenis van Romen and the History of the Book in the Low Countries,” under the director of Florida State English Professor David F. Johnson.

“There are a number of adjectives that seem to have been invented for Jacob Gibbons: driven, focused, assiduous, curious and inspired are among them,” Johnson said. “He is a careful and meticulous writer and researcher, with a fine-tuned eye for detail.

“I think everyone who has worked with him expects great things from him, and justifiably so,” Johnson said. “The kind of initiative he has shown in designing and carrying out his research project is on a level one expects from an advanced graduate student, not an undergraduate.”

Another professor whom Gibbons met at Leiden University is sponsoring him for a Fulbright fellowship, which would allow Gibbons to return to the Netherlands in 2014 to continue his studies after he graduates from Florida State. The U.S. Fulbright Committee has named Gibbons a finalist for the fellowship.

“I love the Dutch language and culture, and I love research, so it would be wonderful to combine the two at Leiden and in some of the other collections in the Netherlands,” Gibbons said.

Aside from his coursework, Gibbons has served his fellow students as the leader of a Freshman Interest Group, helping young English majors in their transitions into college, both socially and academically.

“In teaching these ‘FIG’ colloquiums, I get to know some spectacular students,” he said.

“So far, the program has been great,” said Gibbons, who contributed substantial ideas and content to the program. “Ninety-four students are participating, and we’ve received an unbelievable number of rave reviews from the faculty members who are involved.”

In addition, Gibbons is serving the program as one of six leaders who teach a one-credit colloquium to the students over two consecutive semesters.

“I teach the humanities colloquium, and I like the fact that I get to work with the same students for a whole year,” he said. “During the first semester’s colloquium, I focused on what humanities research is and why it matters, and this semester I’m teaching practical skills that will benefit the students as they prepare to present their research at the university’s Undergraduate Research Symposium.”

Gibbons expressed satisfaction in being able to positively affect the Florida State community during his years as an undergraduate.

“My leadership roles in Freshman Interest Groups allowed me to impact individuals, but I think my involvement with the Undergraduate Research Opportunity Program is most gratifying because of its widespread impact on the university as a whole,” he said.