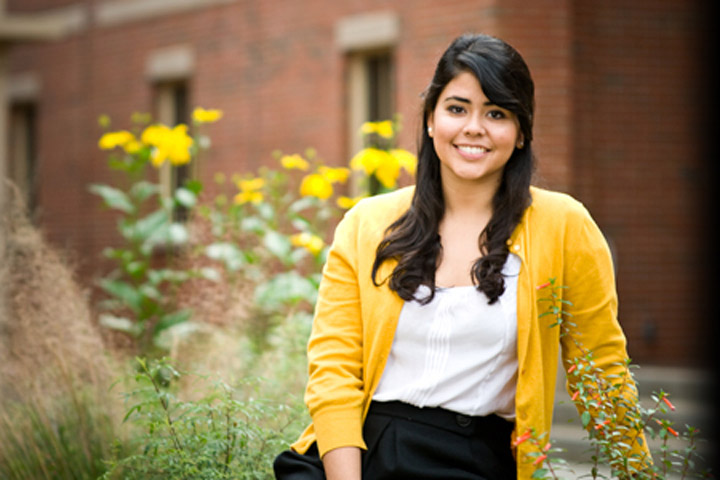 “I thought it was remarkable that this university placed a focus on civic education and making it accessible to students.”

Michelle Avaroma grew up in Miami but spent summers in her family’s native Bolivia.

“The experiences were something so starkly different from urban Miami,” recalled Avaroma, a Florida State University graduate student in public administration with a specialization in nonprofit management.

While on those trips, Avaroma witnessed “the immense poverty in the world” — particularly in parts of Latin America.

Over the years, Avaroma’s family collected old clothes and household supplies and distributed them in their travels around Bolivia. It was her introduction to the difference sweaters or sneakers could make in the life of a child.

“I think growing up, seeing this gave me a different perspective on the value of giving back and how we can do so much for those who have so little,” said Avaroma, who has volunteered her talents to many causes while at Florida State, including tutoring at a mission, spending time with the elderly and helping migrant workers.

Avaroma, who as an undergraduate was a Florida State Service Scholar, earned her bachelor’s degree in history and international affairs. She has been shaped and guided by the empathy she learned in childhood.

“The Service Scholar program and the Center for Leadership and Social Change are what really made me want to come to Florida State, because I thought it was remarkable that this university placed a focus on civic education and making it accessible to students,” Avaroma said.

“I had been involved with community service in high school and had always loved it, but coming to FSU and working with The Center, it became a passion. The Center became home for me almost immediately, and you could find me there waiting for a service project to leave or just doing my homework.”

While an undergraduate and volunteering as a migrant education facilitator, she regularly drove a van of volunteers to nearby Quincy, Fla., where she taught English to migrant workers and immigrants.

It was that particular volunteer gig, she recalled, that taught her the value of “relationships” in service. Each week, the grateful pupils welcomed back Avaroma and peppered her with questions about her family and studies.

“I admired them so much,” she recalled, “because many worked rigorous jobs and still found time to attend evening English classes in the hopes that it would better their lives and the lives of their children.”

From the beginning, Avaroma was involved with Florida State’s annual PeaceJam Southeast event and was tapped to be a mentor at her first conference. Since then, she has led hundreds of high school students “in reflection and discussion.” Now Avaroma is president of the PeaceJam Student Leadership Council — a group that helps to bring the educational component of PeaceJam to Florida State students through seminars, film screenings and service opportunities.

Avaroma was also drawn to Without Words — a museum-style social-justice program at the Center for Leadership and Social Change, where she continues to volunteer.

“When I got involved, it was because it was something so unique and like nothing I had ever done, so I, of course, wanted to be a part of it,” she said. “It takes a lot of time and dedication from the students and staff who participate with this program, and it is a wonderful team effort to put the exhibit on. I think I must have just come to FSU at the right time!”