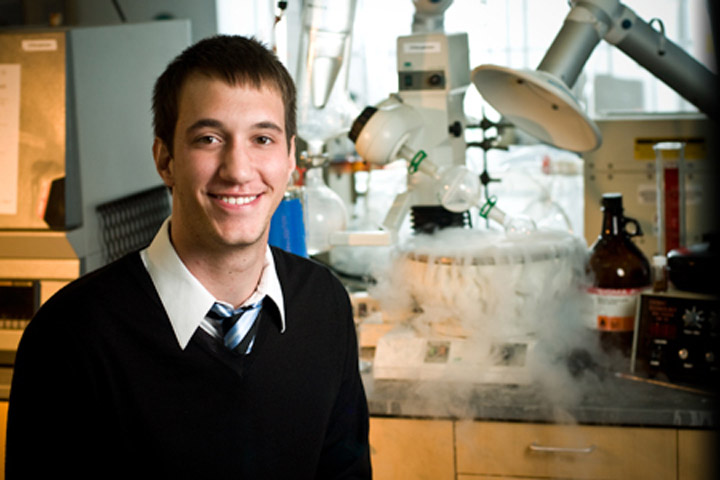 “I definitely see the importance of getting younger students excited about science.”

Kyle Serniak is among those students who clearly thrive in the STEM (science, technology, engineering and math) fields — except that this Florida State senior is excelling in three of them!

Serniak began working in Professor Albert Stiegman’s physical inorganic chemistry lab as a freshman and has worked there continuously, including summers, since the spring of 2010. Lab projects Serniak has been involved with pertain to microwave chemistry and the reactions caused by microwave irradiation, which has the potential to be more energy-efficient than traditional thermal processes.

An honors student, Serniak has several times presented research conducted within the chemistry lab via poster presentations. At the 2011 conference of the Florida division of the American Chemical Society, Serniak also gave a talk in addition to presenting a poster.

For research on the heat-transfer process in the selective microwave heating of heterogeneous catalysts, Serniak received an Undergraduate Research and Creative Activity Award from the FSU Office of National Fellowships in 2011.

“We used a system of differential equations to describe the heat-transfer processes in a microwave reactor between nanoparticles and the solvent in which they are dispersed,” Serniak explained.

The importance of mathematics in this research, as well as Serniak’s other studies, prompted the Riverview, Fla., native to pursue a second major in applied and computational mathematics.

Outside the classroom, Serniak plays guitar in an alternative folk music band and has assisted in chemistry and biochemistry Professor Harold Kroto’s GEOSET project, which makes scientific and other academic information available to budding scientists around the world via the Internet.

“I definitely see the importance of getting younger students excited about science,” he said.

With a 3.7 GPA, Serniak will work this year on his honors thesis under the direction of physics Associate Professor Irinel Chiorescu. Since last year, he has worked with Chiorescu in the Quantum Spin Dynamics group at the National High Magnetic Field Laboratory.

After graduating, Serniak plans to continue his studies with a goal of earning a doctorate in physics.