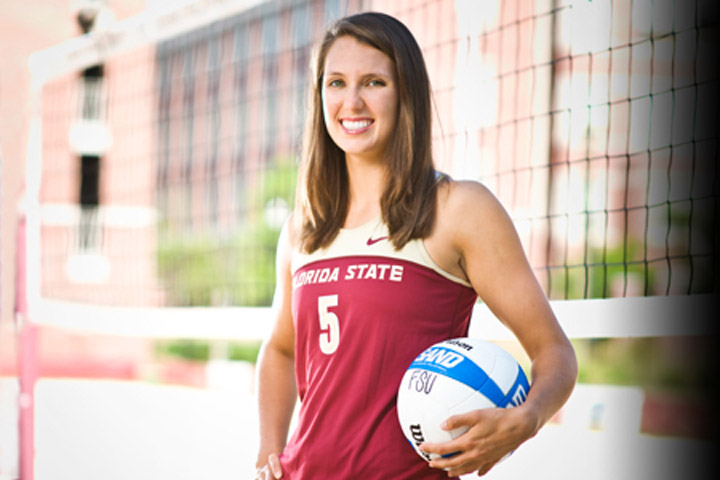 “I feel a responsibility in this position to hold myself to a high standard and provide a good example for others to follow.”

As a member of the Florida State University women’s sand volleyball team, Amanda Saxton has been able to shine as a leader, both on the court and off.

Saxton — a rising senior — had been a member of the university’s indoor volleyball team during her sophomore and junior years. In the fall of 2011, she helped the team get to the National Collegiate Athletic Association Final Four championship.

“I loved being a part of a team,” Saxton said. “I got to know my teammates and they got to know me. I gained respect when they realized that I would always work hard during practices and workouts, and that I would be cheering them on when I wasn’t on the court.”

During her junior year, Saxton was recruited to play for the university’s new sand volleyball team during its inaugural season. As the year began, head coach Danalee Corso selected Saxton as one of the team captains.

“I believe Coach Corso chose me as one of the captains not because I was the best player, but because she knows what I stand for,” Saxton said. “I want to help others realize their full potential, and promote character, integrity and moral courage.”

Through Saxton’s unswerving support for her teammates and her commitment to teamwork, she helped to lead Florida State to a third-place finish in the American Volleyball Coaches Association 2012 Championship in April.

“I have realized that it is not about me, it’s about the team,” Saxton said. “The experiences I’ve had with my teammates have been the most memorable. We can’t do anything without the team working together. Every person matters, and everyone plays a role, no matter how seemingly small.”

Corso said she is happy to know Saxton and have her on the sand volleyball team.

“Amanda truly is an inspiration to me because she is so sweet, smart, generous, kind and thoughtful,” Corso said. “She gives her time to community service and serves as a leader as a captain on our team.”

Academically, Saxton has proven to be a serious student. As a freshman, Saxton was admitted into the University Honors Program. With a 4.0 GPA during her sophomore year, she earned her way into the NCAA Elite 89, the group of student-athletes with the highest GPA in their individual sport’s national championship competition.

In addition to achieving academic excellence, Saxton has demonstrated a dedication to being a role model who young people can look up to.

“When I was in high school, I had great role models and mentors on our team who encouraged me and who I highly respected,” Saxton said. “Now, whether I’m talking to the young athletes during my community service outings or to my teammates, I want to be that kind of mentor for others.”

Through the Fellowship of Christian Athletes, Saxton has encouraged groups of middle and high school students to live out their faith. Through the university’s Wesley Foundation Campus Ministry, she participated in a mission trip to Guatemala to help build a church and lead a vacation Bible school for local children. She also serves her fellow student-athletes as a member of the university’s Student-Athlete Advisory Council.

Because of her demonstrated passion for enriching the lives of others, Florida State selected Saxton to receive the Atlantic Coast Conference Top Six for Service Award for 2011-2012. Each year, ACC institutions chose six of their student-athletes to receive the award.

“My biggest impact on the Florida State community has been through using my position as a student-athlete to mentor, influence and encourage others,” Saxton said. “I feel a responsibility in this position to hold myself to a high standard and provide a good example for others to follow.”