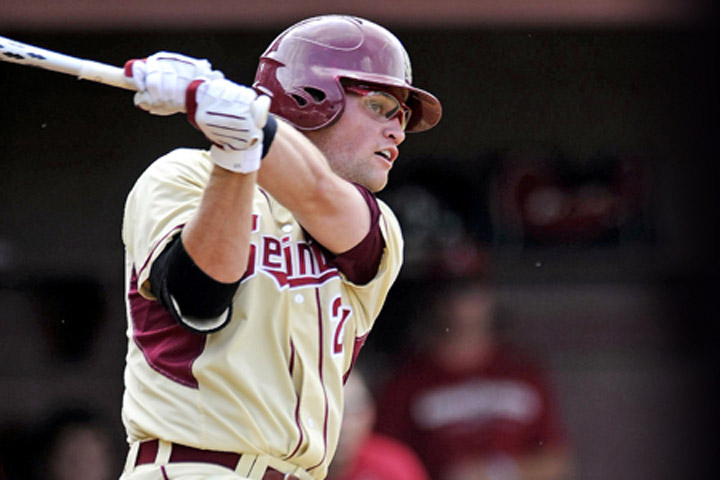 Following in the footsteps of accomplished parents can be challenging, but also can provide opportunities to draw on their skills and insights, just as it has for Florida State University senior baseball player James Ramsey.

Ramsey’s mother, Mary Beck, was a standout women’s tennis player at Florida State. His father, Craig Ramsey, was captain of a Florida State baseball team that advanced to the College World Series.

This year, James Ramsey is the captain of FSU’s baseball team, although he swings his bat in a manner similar to a tennis player’s backstroke. Currently the top hitter on the team, Ramsey also has been hitting it out of the park academically. A business major, he has qualified for the Dean’s List five times and twice for the President’s List, which requires a 4.0 semester GPA.

His achievements in the classroom have made Ramsey a three-time recipient of the Golden Torch Award for highest GPA on the team, earned him All-ACC Academic Baseball Team honors in 2010, and qualified him three times for the ACC Academic Honor Roll.

“James has been a standout student in the classroom and his commitment to obtaining his educational degree proves why he is such a role model to his fellow classmates,” said President Eric J. Barron.

Barron was referring to Ramsey having been drafted last year by the Minnesota Twins but deciding to stay at FSU for his senior year to earn his degree instead of leaving early to play professionally.

“Obviously, it was an unbelievably tough decision to make,” Ramsey said.

Beyond the playing field and classroom, the Alpharetta, Ga., native also is involved in the campus and local community. He is currently president of the Student-Athlete Advisory Council and the Red Cross Noles, which partners with the local Red Cross chapter to better prepare the Florida State campus for natural and man-made disasters.

Ramsey also has been a leader in community service, devoting countless hours speaking to local students on the importance of making good decisions, doing well in school and being a leader on and off the field.

“I love the time of the year when baseball is finished for the fall and I have extra time to focus on giving back to the community,” Ramsey said.

“James comes from a strong Seminole family that believes in the values of education and fulfilling your commitments,” Spetman said. “It means a lot to the university to have James return for his senior season.”

As Ramsey put it, “The Seminole tradition is something that’s very strong, not only in me but in other athletes whose parents went here and played here. We all have that in common and it’s something that’s a pretty strong bond.”