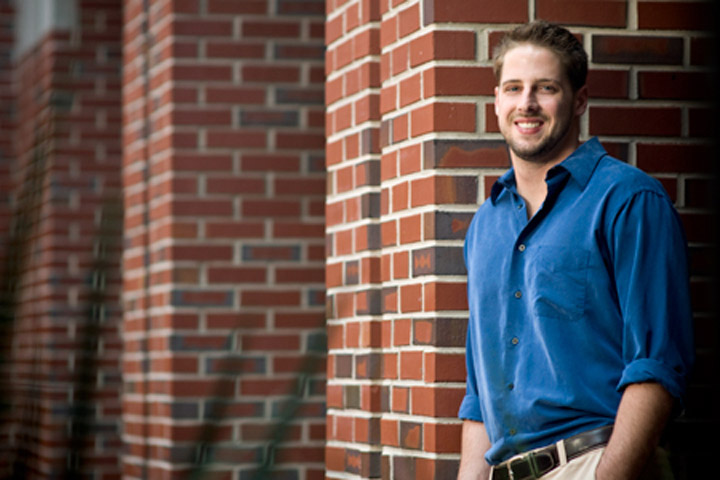 “My interest in science seems to grow the more I learn.”

Robert Wandell has always had an interest in science. Growing up, he would take apart anything mechanical that his parents threw away to find out how it worked.

At Florida State University, Wandell — a chemical engineering major — has been able to realize the depth of his scientific curiosity by conducting undergraduate research under the direction of two Florida State professors.

Originally, Wandell declared his major to be exercise science. However, he began to rethink this choice while taking a class in organic chemistry.

“Organic chemistry taught me how the fundamental building blocks of life are organized and interact,” Wandell said. “I realized for the first time that chemistry could be a career path in which I could both excel and enjoy.”

Wandell took another step toward chemical engineering with his first research opportunity studying organic chemistry in the laboratory of Lei Zhu, an associate professor of chemistry and biochemistry.

“Dr. Zhu gave me the incredible opportunity of pursuing a research project on my own, a responsibility usually bestowed upon graduate students,” Wandell said. “I was instantly hooked. This gave me the freedom to put my own ideas to the test, rather than being the assistant to a graduate student.”

Wandell presented his research, “Development of Fluorescent Probes for Zinc with Large Concentration Coverage Using FRET (Fluorescent Resonance Energy Transfer),” during the 2009 FSU Undergraduate Research and Creative Activities Awards Symposium. He and Zhu also turned this research into a paper that was published in the New Journal of Chemistry.

“Research took my interest in science and the scientific method and turned it into a passion,” Wandell said. “It honed my problem-solving skills, made me a more independent thinker, and provided me with an appreciation for how the study of chemistry can improve our world.”

After changing his major to chemical engineering and being accepted into the Florida A&M University-Florida State University College of Engineering, Wandell’s second research opportunity was studying small-scale hydrogen peroxide production in the laboratory of Professor Bruce Locke, chairman of the Department of Chemical and Biomedical Engineering.

At Locke’s suggestion, Wandell applied for and won a 2011 FSU Undergraduate Research and Creative Endeavors Award, which consisted of a $4,000 grant to pursue his research. He went on to present this research, “Analysis of Product Formation in a Non-Thermal, Gliding Arc Plasma Discharge with Water Aerosol Spray in Air,” at the 2011 FSU Undergraduate Research and Creative Activities Awards Symposium.

In addition to realizing his love for research, Wandell also found a passion for teaching. During the 2009-2010 school year, he served as a teaching assistant in the laboratory portion of an organic chemistry class.

“I’ve found that many intelligent students have problems in this class because they try to memorize how and when to employ the many laboratory techniques instead of logically understanding why techniques are called for,” Wandell said. “For this reason, I adopted a Socratic teaching style to help them think more deeply about the subject matter.”

Wandell also discovered that a positive attitude is highly contagious and helpful in a laboratory setting.

“Even when things didn’t go as planned, I tried to convey excitement, curiosity and wonder to my students,” Wandell said.

In addition to his involvement with research and teaching at Florida State, Wandell joined the Florida State chapter of the American Institute of Chemical Engineers, the Pi Kappa Alpha fraternity and the FSU Flying High Circus.

After earning his bachelor’s degree, Wandell plans on pursuing a doctorate in chemical engineering.

“My interest in science seems to grow the more I learn,” Wandell said. “I have developed much respect for the scientific community through my experiences in research. The chance to study among the brightest minds of my generation is one that I will no longer pass up if given the opportunity.”