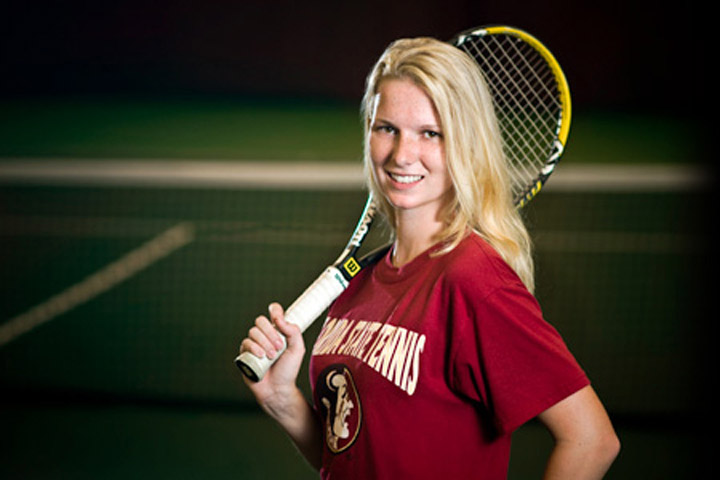 “I think it's important for student-athletes to participate in the university community and give back to the local community.”

Few people are fully aware of the demanding schedules Division I athletes maintain during their college careers. In addition to the practices, workouts, travel and competitions, student-athletes also have to sustain a solid academic standing, and that balancing act can often be difficult to master.

Katie Rybakova, who over the past four years has become the most successful women’s tennis player in FSU history, has not just mastered these innumerable demands. She also has realized academic achievements that are nothing short of extraordinary.

The numerous awards Rybakova has received are testaments to her prowess in the classroom and on the tennis court. With a cumulative GPA of 3.92, Rybakova earned FSU’s Golden Torch award for highest GPA in her sport three times. She also holds a school-record four All-ACC honors and has made it to the NCAA Individual Championships in each of the last three seasons.

“Katie is a role model to her teammates and the athletic department as a whole,” says Danita Townsend, athletic academic adviser for the women’s tennis team. “She exemplifies what we want and expect from all of our student-athletes.”

An English education major, Rybakova elected to take on the challenge of an undergraduate thesis — in spite of suggestions that doing so would be too demanding on her — and completed it by her junior year. As a senior, Rybakova was named to the Capital One Academic All-American women’s at-large team.

“I am so proud of Katie and the entirety of her career, not just on the court but more importantly with the successes she has earned in the academic realm,” says FSU head coach for women’s tennis Jennifer Hyde. “She is a model student-athlete, and I could not be more proud.”

Outside the classroom, Rybakova has been very involved with the Student Athlete Advisory Council — the athletic department’s equivalent of student government — and is co-editor-in-chief of the first FSU undergraduate research journal, “The Owl.” In addition, she has recorded more than 84 hours of mentoring, tutoring and community service.

Says Rybakova, “I think it’s important for student-athletes to participate in the university community and give back to the local community.”

After graduating this fall, Rybakova plans to enroll in graduate school with the goal of earning a doctoral degree.