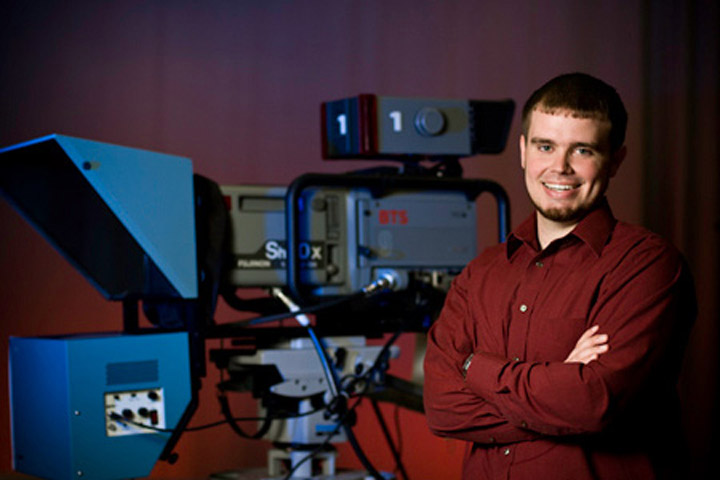 “I hope that it will become a collection of student work over the course of many years and, each year, new students will strive to outperform their predecessors.”

“Our live studio audience loved it,” Patterson said. “It was very encouraging to see people enjoying our hard work.”

The hourlong pilot — part variety, part talk — was taped at WFSU and aired on 4FSU, the university’s public-access channel. It featured a student host who gave a monologue at the top of the show and presided over the interview portion. It had two short student-made films, a student sketch-comedy troupe, and two student musical groups. But the talent was not limited to on-camera performances.

“Most of what we were able to accomplish from a technical standpoint was because of students who work at WFSU,” Patterson said. “Several students within the College of Communication and Information’s media production major are either employed or volunteer at WFSU. They had the specific experience necessary to know what it would take to actually make this happen.”

Patterson’s media production credentials are numerous. He worked as a videographer and editor on “Seminole Sports Magazine” for Seminole Productions. He served as the editor, co-sound mixer and production manager on “Goodbye Ben,” a short film directed by student Dave Dorsey that placed first in the Experimental Category at the Broadcast Education Association’s 2011 Festival of Media Arts. What’s more, he spent the summer between his junior and senior year in Los Angeles studying with the university’s Los Angeles Television Experience (LATE) program.

In addition to his personal production experience, Patterson’s career at Florida State included an active role with Kappa Upsilon Chi Christian Fraternity and as the first media-relations chairman of the Honors Student Association.

“I worked with some truly amazing and accomplished individuals during my time with the Honors Student Association and its predecessor, the Honors Council,” Patterson said. “I felt that my responsibilities with planning events really helped me to become a more effective producer for this variety show.”

“Seminole Night Life” recently became a registered student organization at Florida State, setting the stage for future generations of undergraduates to leave their own mark on campus.

“I don’t see this show belonging to any individual,” Patterson said. “It belongs to all students and the university. I hope that it will become a collection of student work over the course of many years and, each year, new students will strive to outperform their predecessors.”