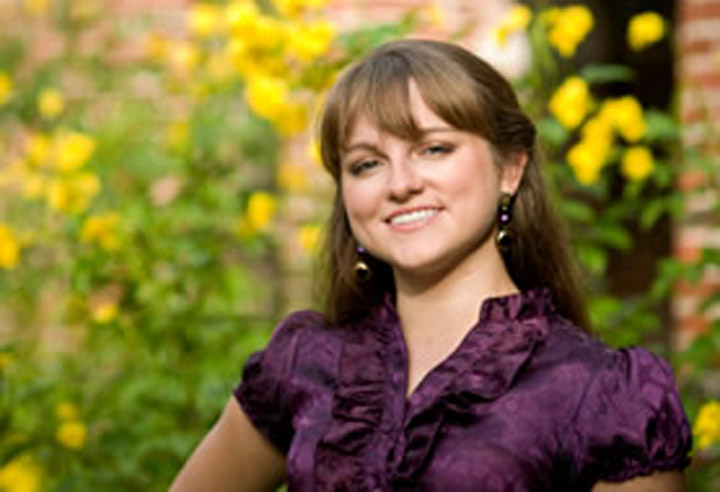 “Getting to help someone achieve their dream is what I will leave Florida State most proud of.”

“I’m majoring in communication/media studies and psychology — with a minor in Habitat,” laughed senior Sarah Timberlake.

Characterized as a scholar and a philanthropist, Sarah has been involved in Habitat for Humanity since her freshman year at Florida State, and each year her involvement has grown. This year she is the vice president of the Florida State chapter.

“Sarah gives enormous amounts of time and energy to our local Habitat for Humanity,” said Professor Davis Houck. “She’s sharing that commitment with her fellow students and making the organization bigger and better. How she does both so well, I’m not really sure, but sleep deprivation doesn’t seem to slow her down,” he said.

“Florida State University prides itself on promoting a culture of engagement,” said Professor Houck. “Sarah lives that engagement daily — in the classroom and in our community.”

She seems to be driven by a deeply ingrained desire to help others. “My entire junior year was spent working toward the day we would hand over the keys of the house we’d been working on to Lateshee Daniels and her daughter Jakyah,” said Sarah. That June day is one Sarah said she will never forget.

“Not only is finishing a house satisfying,” she said, “but the fact that the Warrick Dunn Foundation furnished the house and that President Barron and his wife, Molly, were part of the process added another level to the excitement.”

“Getting to help someone achieve their dream is what I will leave Florida State most proud of,” said Sarah.

Sarah said she enjoys the whole process of making a Habitat House a reality, but there’s one job she particularly enjoys. “I like roofing. I like to put the shingles on the roof,” she chuckled. “It goes pretty fast. And I like being up on the roof. For once I get to be taller than everyone else.”

Habitat for Humanity may be the organization Sarah has been most involved with during her college career, but it hasn’t been the only outlet for her altruistic impulses.

As a freshman she was on the Honors Program Relay for Life team and was a Hall Ambassador for Landis Hall. “I’ve been a member of the Wesley Foundation from Day One,” said Sarah, who served as a student representative on the Wesley’s board of directors.

With her Theta Alpha sorority sisters, she had a hand in The Big Event, one of the largest one-day, student-run service projects in the nation. For the past three summers Sarah has participated in mission camps doing minor repairs to the homes of the elderly or disabled. “It’s a team effort. Mostly we repair holes in houses and build ramps.”

As for scholarship, Sarah has distinguished herself through research done on behalf of her mentor Professor Houck. “He was the first professor to challenging me intellectually and continues to spur me on academically.”

The most recent research she has worked on will be used in an anthology, “Rhetoric, Religion and the Civil Rights Movement.” “I was looking for information about a minister who had been involved in the civil rights movement. … He had eight children, and I was able to track down some of them.” There was a big payoff for her efforts when she received a thick packet of the minister’s papers.

“Sarah embodies two rare sensibilities: the scholar and the philanthropist. … She’s fearless about exploring ideas, grinding them down to first principles, holding them up to the light and making a judgment,” said Professor Houck. “That takes effort and energy — and a belief that the process is worth doing.

“She questions rather ruthlessly. Not obnoxiously — Sarah doesn’t do obnoxious —but she’s eager to cut through the academic niceties, probe her professors’ verities, and see things for herself,” he said.

“As for her generosity, she recognizes that giving back springs directly from her intellectual commitments.”

Sarah graduates in the spring and plans to continue her education to earn a master’s degree in communications. “I am hoping to work for a non-profit organization that focuses on social justice issues,” she said.