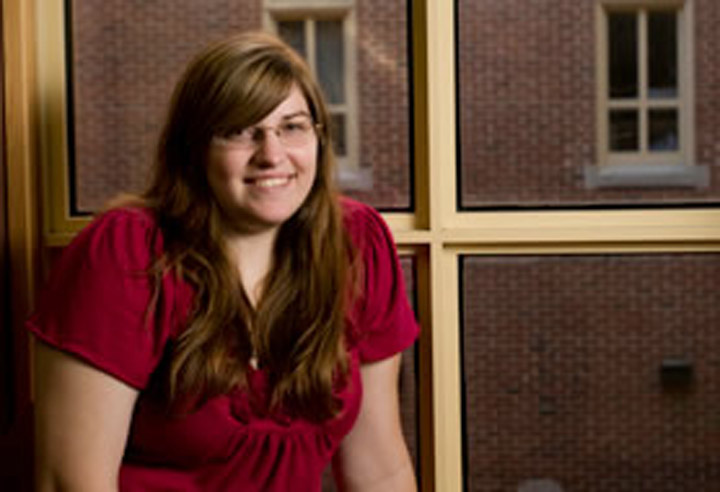 “You never forget your R.A.”

Rachel Luczynski had a challenging full-time job during her sophomore and junior years at Florida State — one that she feels was a vital component of her academic career. “Being a resident assistant was a huge part of my college experience.”

Graduating this month with degrees in Creative Writing and Geography, Rachel said, “You never forget your R.A.”

She was one of 19 resident assistants at Kellum Hall, a 10-story building housing more than 500 students, when she was a sophomore. The following year she was assigned to Dorman Hall, home to more than 300 students. The first year she was responsible for 30 students, the next year 60.

“You have to be ready to deal with whatever situation arises — whenever it arises,” said Rachel, who was named R.A. of the Month in September 2008. “It seems like a lot of the problems come up late at night, or early in the morning,” she laughed. “For the most part you are dealing with freshmen on their own for the first time. … They are testing the limits.”

With the benefit of intense and ongoing training, resident assistants — who may be only one or two years older than their charges — typically deal with infractions from smoking in the dorm and underage drinking to playing loud music after hours. “Once a girl got on the elevator with a snake around her neck. … I told her pets weren’t allowed in the dorm. … Actually, a student can keep fish, but not a dog named Fish.”

Rachel said although none of the predicaments she encountered were extremely serious or dangerous, there were plenty of long nights that ended with her having to write a detailed report of the event. “I wouldn’t trade that experience for the world. … You really bond with the other R.A.’s. They become your friends. … You learn the value of teamwork,” she said. “You develop a greater capacity for problem solving. And you get experience with community building.

“Every time I talked to one of the girls on my floor, I felt like I was making a difference in their lives,” said Rachel.

English professor Ned Stuckey-French has been impressed with Rachel. “She is responsible beyond her years. I don’t know all the sources of her maturity, but I do know she has strong religious faith,” he said.

“I found The Navigators my first week at Florida State,” said Rachel. The non-denominational Christian student group has been a source of support for her ever since. Those students became her first community of friends. “It was great to find a group of people with common interests so quickly,” she said.

Rachel, who was editor of her high-school newspaper, said, “Writing is something I just do. … It seemed the natural thing to study creative writing here.” In 2008, she became the art director for Kudzu Review, Florida State’s undergraduate literary magazine. She was recognized for her contributions in that role at a special ceremony at The Warehouse, longtime venue for literary events.

As a member of his advanced article and essay workshop Professor Stuckey-French said, “Rachel wrote brave and honest essays. … (Some) about the difficult moral choices one must make as a Resident Assistant when one’s charges are breaking the rules. (She) understood fully that the building blocks of personal essays are dramatized scenes. Hers were dramatic, well-paced, full of significant detail and laced with witty, believable dialogue.

“More than that, however, she also learned that revision means being ruthless in cutting and rearranging those scenes, writing new scenes if necessary, and finally and especially, reflecting within your essay on the significance of those scenes so that the piece rises from anecdote to essay, from the personal to the universal,” said Professor Stuckey-French.

After graduation, Rachel plans to return to New Jersey where she lived as a child before her family moved to Tallahassee. “Most people here think I’m crazy, but I miss the cold weather and the snow,” she said.

She plans to do a stint with Teach for America before continuing her education. “I think my experiences and the education I got here have prepared me for about any challenge.”