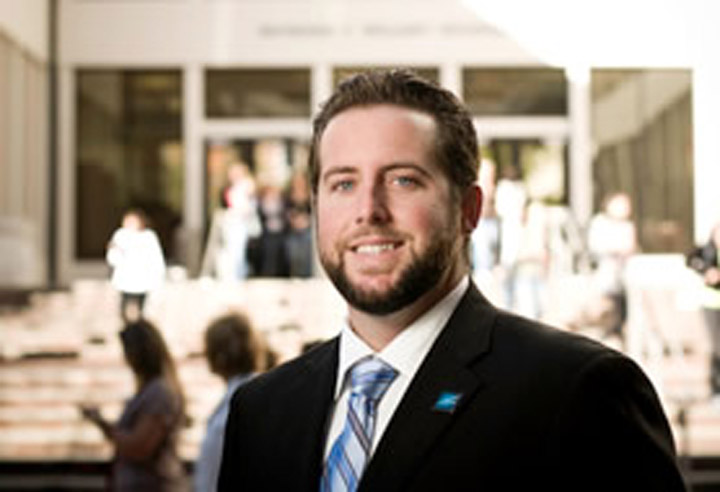 Andy Johnson, a member of Class VI of the prestigious Florida Gubernatorial Fellows program, had a change of heart as he was about to embark upon the study of law.

“I’d had it in the back of mind since I was young that I would be a lawyer,” said Andy.

“Andy is one of the best and the brightest students to come through our department in many years,” said Professor Tim Chapin, chair of the Department of Urban and Regional Planning.

Andy graduated from Florida State in December 2006 with bachelor’s degrees in philosophy and political science. Both courses of study would be excellent preparation for law school, he reasoned.

In 2008, after a break of about a year and a half, Andy returned to Tallahassee and took a part-time job with the Florida Department of State. “I went to work for the Florida Main Street Program, essentially a downtown revitalization initiative,” he said.

“I was immediately fascinated,” said Andy. “Nothing had captivated my interest like this before.”

To build his knowledge and expertise in this area, Andy applied and was accepted for Florida State’s joint-degree program in Urban Planning and Public Administration. He also won a Reubin O’Donovan Askew Eminent Scholar Chair Award.

Andy and 11 of his fellow graduate students traveled to Florida State’s Panama City, Panama, campus in the summer of 2009 to work on a revitalization plan for a poor urban community — Boca la Caja — near the city’s center.

“Andy took on the leadership role for the project,” said Professor Chapin. “He showed maturity and professionalism far beyond his years during some tough times in Panama.”

Boca la Caja is a small community of about 2,500 residents living on approximately 10 acres. “This is about the last undeveloped coastal part of Panama City. … It’s surrounded by high-rise buildings, so the property values have escalated,” Andy said.

The community could easily be swallowed up, forcing the residents to relocate, said Andy. “It was our job to assess the conditions and propose changes and then make recommendations to a leadership group within the community.”

Andy said the student group had strong support from government officials, but some community members were skeptical of their efforts. “Some people believed we were there to try to buy up their land, and it was difficult to convince some of them that was not the case.”

Living and studying in Panama was a high point of Andy’s academic career, he said.

“It was exciting to learn about a different culture. I gained an understanding of how other people live their day-to-day lives,” said Andy. “At 4 a.m. you could see 100 people waiting for buses to take them to work. … They are on the fringe between a developing and a developed nation, but they are proud of what they have — and they are fiercely independent.”

As a 2010 Gubernatorial Fellow, one of 13 chosen by former Gov. Charlie Crist from the entire state, Andy has been working for the Florida Department of Community Affairs. The agency is responsible for overseeing growth management in the state, among other statutory duties. Andy is working on a project to assess future residential development capacity and its potential impact on statewide planning efforts.

“I’m looking forward to graduation and excited about serving the public in any capacity I can,” said Andy.