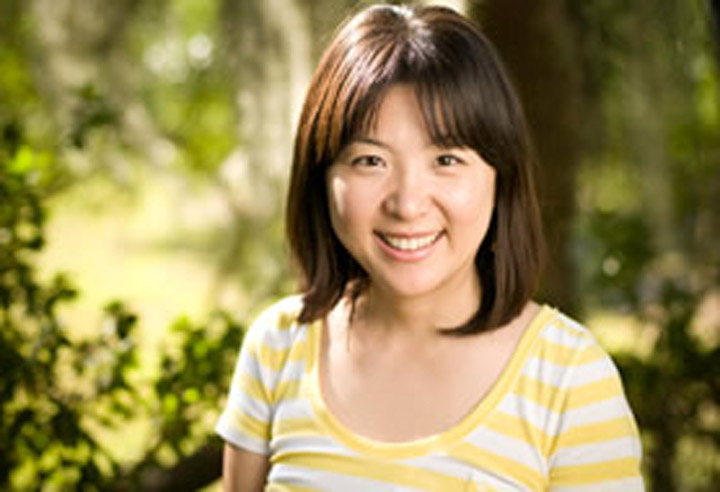 “I prayed for intelligence and wisdom.”

When Min Jung Kim, a native of South Korea, came to the United States, she knew that becoming a speech pathologist would not be easy, especially since she would be studying in English, her second language. “But it was my dream to help people,” she said.

To do the work she wanted to do, she would need a master’s degree and a Ph.D. Min Jung realized the next several years would be difficult, but she had no idea just how difficult they would be.

Driven by what Professor Leonard LaPointe refers to as “perseverance, patience and a heavy dose of resolve,” Min Jung has nearly achieved her goal. She will be awarded her Ph.D. in Communication Science and Disorders this spring.

About to begin her career as a speech pathologist, Min Jung will do so with a profound personal understanding of her clients’ challenges, especially those of people who have suffered traumatic brain injuries.

In 2001, about to begin working on a master’s degree, Min Jung sustained such an injury herself. She had just learned that she had been accepted to the University of Arizona to study speech pathology — and had been awarded a scholarship.

“I was so happy and excited,” said Min Jung. To celebrate the good news and Min Jung’s birthday, friends took her out for a day of fun. “We rented a jet ski. I had never been on a jet ski before, so I was the passenger.”

The last thing Min Jung remembers is skimming along the lake with her friend. She has no memory of being hit by a speedboat. “When I woke up in a strange hospital, I was already immersed in the scary and chaotic world of traumatic brain injury.”

When she was well enough to travel, she returned to South Korea to recuperate. Her recovery was neither rapid nor simple. Min Jung became severely depressed. Her behavior changed. “I was easily upset. … I became angry at my brother’s wedding and pulled his hair,” she said. The brother, a physician, wept because she was so unlike the sister he had always known, said Min Jung.

“I prayed to God for intelligence and wisdom,” she said. More than ever, Min Jung wanted to study so she could help people with communication disorders, especially those with TBI. Her desire to get on with her education drove her to return to the United States, but it was too soon. “I was sleepy all the time, and my memory wasn’t good,” she said. Again, she returned to South Korea.

In 2002, Min Jung returned to the U.S. and began the master’s program in speech language pathology at University of Tennessee.

Still dealing with the aftereffects of TBI, “I found that it was so hard now to memorize material,” something that had been easy for her before the accident, she said. “I struggled. … I believe I prayed more than I studied.”

Min Jung persevered and was awarded her master’s degree in 2006.

For her doctoral work, Florida State’s program in Communication Science and Disorders, which is affiliated with Tallahassee Memorial Healthcare and Neurolinguistic-Neurocognitive Rehabilitation Research Center, “most closely matched my research interests,” said Min Jung. “Coming to Florida State was one of the best choices in my life.”

The research Min Jung has done while at Florida State has impressed her professors. “The inability to recall the names of everyday objects is common following TBI,” said Professor Julie Stierwalt. “Min Jung has gone beyond that well-known fact to study the nature of the difficulty. … She completed a study in which she examined the nature of gesture in people with TBI,” Professor Stierwalt said. “Does gesture appear to accompany word-retrieval difficulty and does the presence of gesture facilitate or hinder accurate retrieval?”

During the spring of 2008, Min Jung worked with patients with TBI at Rancho Los Amigos National Rehabilitation Center. “I feel a strong obligation to students with TBI,” said Min Jung. “I would like to help them achieve a positive recovery in cognitive and communicative ability so that they can return to school.”

Min Jung’s resolve to help people with communication disorders has never wavered. “I would like to devote my life to people with brain injury. I hope to be able to improve the quality of life among individuals with TBI throughout my career.”