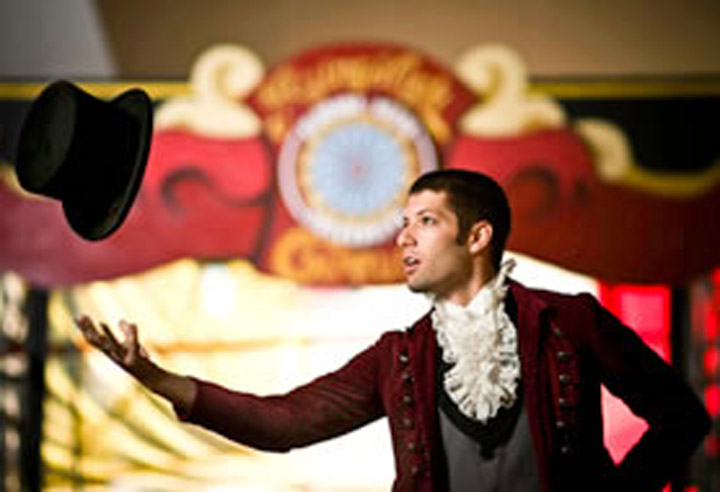 “I have to keep pushing my boundaries.”

When Ricardo Aguiar was a little boy, he was constantly telling his mother stories. “Anything and everything would spark my imagination. I’d be off and running with some elaborate plot,” he said. “Stories just poured out of me. I couldn’t stop coming up with stories. One day as I began to launch into one, my mother said, ‘Write it down,’ and handed me a notebook. That didn’t stop me. The story kept spilling out. She said, ‘I mean it, write it down.'”

“I’ve been writing ever since,” said Ricardo, or RJ as he prefers to be called. “My father and I are both Ricardo. I have no middle name. The ‘J’ is for ‘junior’ as in Ricardo Jr.”

At Florida State, RJ has found plenty of opportunities to tell stories. Going for bachelor’s degrees in creative writing and media production have been obvious outlets, but then there’s his work with The Flying High Circus and Florida State’s student-run radio station, WVSF.

If RJ gets involved, he eventually finds a way to create a narrative — and make an impression.

RJ, a senior graduating this spring, is deep into his Honors in the Major thesis in creative writing. “I’m taking issues I have explored in my media/communications courses, using my creative-writing skills and what I have learned in media production to write a screenplay,” he said.

This is more than an academic project for RJ, who has his sites set on a career Hollywood. “I’m trying to create something that could be picked up by a studio or producer and made into a film,” he said.

“The theme is the ‘editorialization’ of the media,” he said. “The main character is a news reporter who becomes entangled in a web he’ll never escape. It’s an ethical Catch-22,” he said. “The form is sort of a shattered narrative. … Gabriel Garcia-Marquez’s ‘Chronicle of a Death Foretold,’ in some ways, is an inspiration for the story.”

With his intense passion for storytelling, it’s not surprising that RJ sometimes finds himself in the spotlight. That’s just where he landed when he became part of The Flying High Circus.

RJ said he regrets not becoming part of the circus until his sophomore year. “I was intimated my first semester on campus. … I had seen several of the shows before it crossed my mind to get involved,” he said.

But when he did, the director of the Flying High Circus, Chad Matthews, quickly recognized RJ’s potential and put him to work. “He has been a vital part of our show the past two years. He is an exceptional ringmaster. His personality on stage combined with his performing acumen result in an outstanding lead for our show,” said Professor Matthews. “The only thing that surpasses RJ’s talents on stage is his passion for performance.”

As ringmaster, RJ not only performs but also writes the scripts that give shape to the shows. He has also performed as an aerialist on the double trapeze. “The circus has been an incredible experience for me,” said RJ. Even now, after being part of it for more than two years, “I have to keep pushing my boundaries.”

The Flying High Circus takes up residency at Callaway Gardens in Pine Mountain, Ga., from June through August each year. Last summer RJ and about 30 other Circus members gave performances five days a week and worked as counselors at the gardens’ Summer Adventures camp. “With 70 performances a summer, it’s a lot of work, but I loved it,” he said.

RJ also is an active volunteer for radio station WVFS, also called V89. “I am the assignments editor for the news department and responsible for finding material for special reports. … I also work on the station’s news magazine, “Vox Populi,” he said.

His work on “Vox Populi,” which airs from 9 to 10 p.m. the second Wednesday of the month, has been a great outlet for RJ’s creativity. “I like to come up with themes to build the show around. We push the boundaries a bit with satire, but still keep it informative,” he said.

Dr. Misha Laurents, communications-studies professor and general manager of WVFS, encouraged RJ to volunteer at the radio station. “(He) is wonderfully enthusiastic and ambitious. As a student in one of my honors classes, RJ impressed me with his sense of humor, intelligence and seemingly endless energy,” she said.

For two years in a row, “Vox Populi,” in competition with programs from 30 countries, has won bronze medals at the New York Festivals Radio Programming and Promotion Awards.

RJ has an optimistic, yet realistic, view of life after graduation. “The entertainment business is an unpredictable one and one in which it is difficult to establish oneself. … But with all that I have had the opportunity to do at Florida State — writing, radio and video production and editing, working as a camera person, production assistant, an actor, even an aerialist and circus performer — I have confidence that I will find my way.”