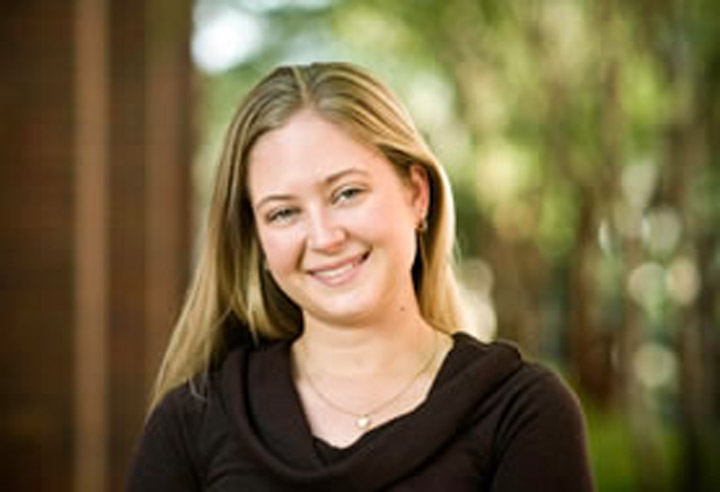 “My faith and what I have learned at Florida State about wrongful convictions and human-rights abuses pushed me to want to go to law school and practice criminal defense.”

It was serendipity that brought Chelsea Enright to speak at a meeting of the Board of Governors of the Florida Bar Association. It was what she said to them that prompted the lawyers to pass a resolution calling on the Florida Supreme Court to establish a commission to study wrongful convictions.

It was an extraordinary day for the college senior majoring in criminology and sociology, but she is, as Professor Dan Maier-Katkin put it, “an astonishing student.”

“Chelsea came to see me one day about two years ago to ask if I would supervise her undergraduate Honors project. I asked her what she was thinking of working on. Often, students have no firm idea, and need a little guidance,” said Professor Maier-Katkin.

This was not the case with Chelsea. “I want to do a study of all exonerations of wrongly convicted defendants in criminal cases in Florida over the past few decades,” she told him.

Slightly taken aback, he pointed out that what she had in mind was an ambitious project. He asked her how she intended to go about it, not really expecting Chelsea to have a well-thought out plan, and not sure himself how such work might be done.

“That was the beginning of one of the most interesting and competent student projects with which I have ever been associated,” said Professor Maier-Katkin.

During her sophomore year, Chelsea — who has a 3.9 grade-point average — had an internship at the Innocence Project of Florida. When she started working there she was involved in petitions to get the court to overturn the convictions of two inmates. They had been sentenced to life in prison, “but later when DNA testing was done, it became clear that both were innocent,” said Chelsea, whose gentle, joyful manner seems at odds with the study of crime and punishment.

After she had been given full access to all the Innocence Project’s case files on DNA exonerations, Chelsea obtained a list from Amnesty International of all non-DNA exonerations in Florida of inmates on death row. She then found the records of those cases on the FSU Law School online records database.

With all these exoneration documents in hand, Chelsea began looking for patterns that would explain how innocent people ended up in prison. “I tracked the year of the crime, the charges against the defendant, the race of the defendant and victim, the location of the trial,” and other factors, she said.

So what makes the system go so terribly wrong? “Mistaken eyewitness identifications, police and crime-lab misconduct, prosecutors concealing exculpatory evidence and judges allowing questionable experts to testify in court,” are some of the issues, she said. “It doesn’t just happen in one part of the state. (Wrongful convictions) happen from the Panhandle to Everglades,” she said.

Professor Maier-Katkin decided Chelsea should meet Sandy D’Alemberte, former president of Florida State University and the American Bar Association. It happened that the very next day D’Alemberte was scheduled to make a presentation to the Board of Governors of the Florida Bar, and he asked Chelsea to come with him and present her research. When she finished, they gave her an ovation, and then passed D’Alemberte’s resolution calling on the Florida Supreme Court to create a commission to study wrongful convictions.

Chelsea defends “Trial and Error: Exonerations in the State of Florida” — for which she won the Bess H. Ward Honors Thesis Award — this month.

“When I started college, I thought people in prisons were there because they had committed crimes,” she said. “I was probably more on the side of law-enforcement. I’m definitely more skeptical now.”

Chelsea has been a member of the Intervarsity Christian Fellowship since 2008. “The Fellowship doesn’t preach or try to convert people,” she said. “It’s inter-denominational, and we minster to the poor. … (IVCF) is close to my heart,” she said.

“My faith and what I have learned at Florida State about wrongful convictions and human-rights abuses pushed me to want to go to law school and practice criminal defense. (They) certainly have influenced my attitude toward capital punishment.”

Chelsea graduates at the end of the semester and has applied to law school but hopes to take a break before beginning her studies in the fall. “I applied to be a program assistant with the Florida State’s Florence Study Program this spring. “I spent the summer of 2009 on the program,” she said. “It was amazing to delve into the art and architecture of Italy.”

“After law school, I’m not sure what sort of work I will take on, but I would like to continue my research in wrongful convictions,” said Chelsea. “I hope to help write legislation to help prevent innocent people from going to prison in the first place.”

Asked to explain what it is about Chelsea that sets her apart, Professor Maier-Katkin, said, “She has a very fine mind that is matched by an equally fine character. Her compassion goes beyond sympathy for the underdog,” he said. “She is a person of deep faith, but I think there is something else that motivates her — something secular — a highly refined ethical sense.”