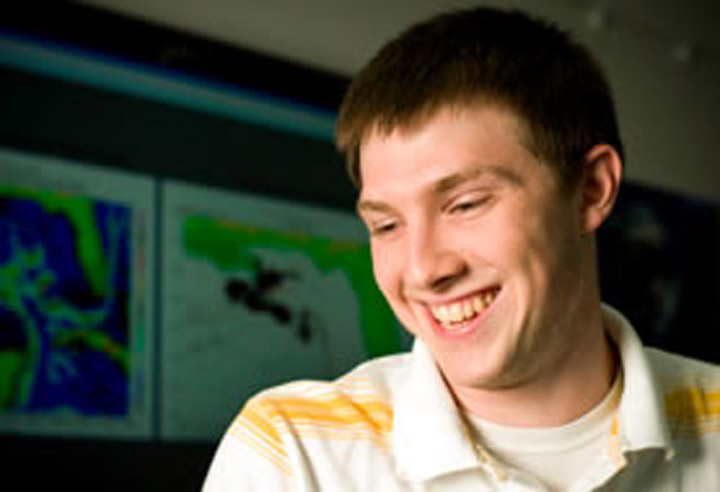 “I can retreat into mathematics and become completely absorbed. To me, it's relaxing.”

How many college students, do you suppose, share Daniel Gilford’s idea of relaxing? When the junior meteorology student, who describes himself as “driven, motivated, intense,” needs to chill out, he likes to kick back with a few really complex math problems.

“Math is fun to me. I am good at it. I can retreat into mathematics and become completely absorbed. To me, it’s relaxing,” said Daniel, recent recipient of an Ernest F. Hollings Scholarship from the National Oceanic and Atmospheric Administration.

An affinity for mathematics is a great thing for a meteorology student. “We’re required to take a lot of math. … Past Calc 3,” said Daniel, who has maintained a 4.0 grade-point average during his time at Florida State. “There’s no easy road to becoming a meteorologist.”

“To many students the course was very demanding, especially under the overwhelming homework load and projects I assigned to them,” said Professor Wu. “Most of students spent numerous nights in the computer lab until midnight. (But) for Dan, the course content was so simple. … He just had the logic and knowledge to solve the problems in the most efficient way.”

That proficiency helped Daniel — who, by the way, was home-schooled — land the Hollings Scholarship. The prestigious award, which goes to university juniors, provides exceptional opportunities for a young meteorologist. The scholarship is designed to increase undergraduate training in oceanic and atmospheric science, research, technology and education.

Hollings Scholars travel to NOAA headquarters in Silver Spring, Md., for a weeklong orientation before deciding upon a research project from a smorgasbord of possibilities. Students select a topic — studying tsunamis in Hawaii or algae bloom in the Great Lakes, for instance — based on their career goals and interests. They spend the summer before their senior year doing the research, while being paid for their efforts. At the end of the summer they return to NOAA headquarters to present their findings.

The chance to do research is one of the things that caused Daniel to come to Florida State. “One of my first questions when I was speaking with the meteorology advisor at Orientation was, ‘Are there opportunities for research?’ I was told that many of the professors in the program are enthusiastic about allowing students to do research in the atmospheric sciences,” he said.

“I took advantage of this at the end of my sophomore year when I began working for the Center for Oceanic-Atmospheric Prediction Studies. COAPS allowed me to (fulfill) my desire for research and dive right into my field immediately.”

His current research has many practical applications. “I analyze daily and hourly temperature ranges and correlate them with climate oscillations such as the El Nino/La Nina-Southern Oscillation,” said Daniel. An oscillation is essentially a climate pattern. El Nino and La Nina are characterized by variations in the surface temperature of the eastern Pacific Ocean. “I also compare the data with heat stress on livestock, on energy consumption and other effects upon society.”

Daniel’s world is wider than the realm of mathematics, meteorology and research. In fact, he took a year off after completing his high-school studies to work — and indulge his passion for nature — at Teen Valley Ranch, a year-round non-denominational Christian camp and retreat in the Blue Ridge Mountains of North Carolina.

“The night sky was incredible up there. Being outdoors and taking part in all the activities — I even learned to ski,” said Daniel. “It was a wonderful experience.”

Here at Florida State, Daniel is active in the Christian fraternity Kappa Upsilon Chi, last year as its social chair and this year as chaplain. “I organize our semi-annual retreat and guide the fraternity in spiritual matters and leadership,” he said.

He was a resident assistant during his sophomore year. “There were so many challenging days when I was able to push through and assist the members of my community, as well as grow in leadership,” said Daniel.

On track to graduate in the spring of 2012, Daniel intends to continue his education. “I want to continue my research and my studies either in mathematics or meteorology/climatology,” he said. “Ultimately, I would love to receive my Ph.D. and be able to teach.”

Professor Wu would be surprised if his student didn’t achieve his goal. “I feel that Dan is determined to pursue a career that only a very small group of ‘pure’ scientists would pursue, without seeking shortcuts for fame or wealth.”