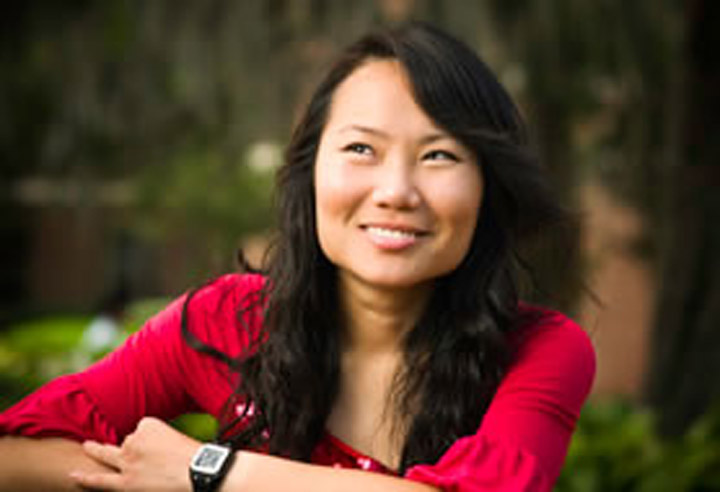 “I learned from the LeaderShape Institute to live with integrity and to have a healthy disregard for the impossible.”

Ana Ng had a demanding job during her first two years in college. She combined her Chinese and Spanish language skills as a full-time salesperson for a Toyota dealership in Panama City, Panama. Ana, senior finance and marketing major with a minor in Hispanic marketing communication, at that time was a Florida State University student at the university’s Panama City campus, an FSU campus for more than five decades.

That academic and professional preparation set the stage for her arrival in Tallahassee, where she has become an energetic leader, well prepared for a career in international commerce.

Ana, the first person in her family to attend college, was born in Panama and moved with her parents to Venezuela when she was six years old. When she was 10, the family moved to China, where Ana became fluent in two widely spoken languages of that country — Mandarin and Cantonese. Later the family returned to Venezuela where she attended middle school.

When she was 18, the family returned to Panama, where she took a part-time job with the Taiwan Embassy. The job involved attending large trade expositions where she used her Chinese and Spanish language skills to facilitate business transactions.

“I was explaining how a small tractor worked, and the CEO of the Toyota dealerships in Panama saw that I could speak Chinese and Spanish,” she said. Later he admitted he was even more impressed by the energy and passion she demonstrated than her language skills. “He told me he had just gotten 500 Toyotas shipped to Panama and said, ‘How would you like to sell cars?'”

Although she knew nothing about cars — or sales — she decided to give it a go. “It was very challenging at first,” she said. Ana became the youngest automobile salesperson in the country.

After completing her sophomore year in college, she was faced with a decision. She could continue working; she had been very successful. But her plan had been to transfer to Florida State’s Tallahassee campus to finish college — and to become fluent in English. “My parents encouraged me to continue in school. They said, ‘You can do more with your life. Go to college. Go explore the world,'” said Ana.

“It was a hard decision for me, but it was the right one,” she said.

Ana arrived in Tallahassee full of the energy and passion the Toyota CEO had recognized in her, ready to embrace the opportunities the university offered.

In May 2009, Ana took part in the LeaderShape Institute, a six-day program hosted by the Center for Leadership and Civic Education that builds leadership skills. “I grew so much in that week that I wanted to be part of the team that makes LeaderShape possible,” she said. She applied to be an on-site coordinator and “had the chance to work with an amazing team,” said Ana. “We were in charge of marketing, logistics planning, community-service coordination and, most important, we learned from each other.

“Working with the LeaderShape faculty team inspired me to work toward being a better person,” said Ana. “Their passion is to work with students, tell them not to be afraid to dream, to believe in themselves. They genuinely hope this generation will make the world a better place.

“I learned from the LeaderShape Institute to live with integrity and to have a healthy disregard for the impossible,” said Ana.

Dr. Laura Osteen, co-director of the Center for Leadership and Civic Education, was impressed with Ana’s performance. “She was an amazing student coordinator,” said Dr. Osteen. “She is a remarkable scholar and leader. Her positive energy, can-do spirit and genuine desire to understand bring depth and joy into every encounter.

“Ana is truly one of Florida State’s treasures,” said Professor Alvin Stauber of the College of Business.

This spring Ana finishes her undergraduate studies. With her leadership abilities, work ethic, language skills, bachelor’s degrees in finance and marketing and minor in Hispanic marketing communication, she is well prepared for her next challenge. She was successful in business as a college freshman with no experience. One can only imagine what Ana will achieve in the future.