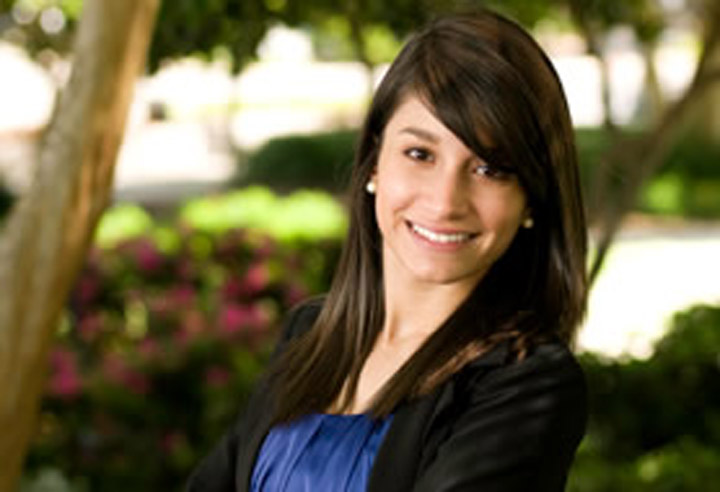 “(The Global Peace Exchange is) one of the things that helped me decide what to do with my life. I want to focus my career on alleviating poverty.”

Stephanie Moline Benoit had lived in the United States for only a year when she arrived on Florida State’s campus for the 2007 fall semester. The senior majoring in economics and international affairs lived in the Dominican Republic until she moved to Florida to be with her father and finish high school at Clark Advanced Learning Center in Stuart, Florida.

The Florida State campus was very welcoming, she said. Still, she was a young woman alone in a new place, a new culture. “It was very difficult,” said Stephanie. “First, leaving my mother, siblings and grandparents and all my friends. And then coming here knowing no one, to study in a language different from my own — it was hard,” the native Spanish speaker said.

Apparently, Stephanie thrives on challenge. With one semester to go, she has maintained a 4.0 average throughout her college career while working part time and being deeply involved in international service.

In 2009, Stephanie was one of 17 students selected from around the world to attend the first-ever Acumen Fund Student Leaders Workshop in New York City. The Acumen Fund is a non-profit global venture that invests in business as a means to ending poverty.

“I’m motivated by a philosophy of dedication and discipline,” she said. “By enrolling in challenging courses and directed individual studies, attending lectures and conferences and creating my own research project, I have tried to make my experience at Florida State is as enriching as possible.”

Stephanie became involved in service organizations during her first semester on campus. “I saw it as an opportunity to meet people with goals similar to mine and to develop skills outside of the classroom,” she said.

She became part of the Global Peace Exchange, a group whose mission is to create sustainable grassroots development projects throughout the world. As a sophomore she traveled to Guatemala with other volunteers to work with teachers who needed help with their English-teaching skills. She was chosen to be GPE co-director for the 2009-10 academic year and will hold that position until she graduates in the spring.

As a freshman, Stephanie also became involved in Latinas Achieving Distinction in Excellent Service, or L.A.D.I.E.S., which led to the establishment of Kappa Delta Chi, the university’s only service-based sorority. “I became a charter member and standards officer in spring 2009,” she said.

Stephanie said GPE members take a focused and tactical approach to the projects they engage in. “We spend a lot of time deciding what projects to do. … We write grant proposals and do other fundraising. …. The projects have to be about the people we are trying to help, not about us. … One of our advisors said, ‘Sometimes the best thing you can do to help, is get out of the way.'”

GPE is “one of the things that helped me decided what to do with my life,” said Stephanie. “I want to focus my career on alleviating poverty.”

With this in mind, Stephanie became interested in the potential of micro-finance — the practice of providing small business loans to low-income people who lack access to banking and related services. When Stephanie engaged in a Directed Independent Study, faculty member Dr. Onsurang Norrbin suggested that she visit economics professor James Cobbe to discuss doing a research project on the subject.

“I was struck by Stephanie’s passion for her topic, and quickly discovered that she was extraordinarily talented,” said Dr. Cobbe. “I gave her some material to read — a technical and advanced collection on her topic — which she very quickly absorbed.

“She had developed her interest in her topic through conversations with poor women in Guatemala during her time as GPE project manager,” said the professor. “I helped Stephanie with her Undergraduate Research and Creative Activities Award proposal, which moved quickly from being vague and imprecise to solid.”

Her proposal was to investigate the effectiveness of micro-finance by comparing the living conditions of recipients of small business loans who were successful with those who were not. The URCAA supported the project, which took her to Santo Domingo this summer.

She was able to do some of her research while working as an intern at Banco Ahorro y Credito Adopem in Santo Domingo. “It is both an NGO and a formal bank,” said Stephanie. “The NGO provides training and education to low-income people, and the bank provides financial services such as credit, savings, insurance and remittances. … It was an amazing experience. As part of the internship I was expected to work in every part of the organization.

“I also spent time with impoverished people who had gotten micro-loans. I found many interesting things,” said Stephanie. “I haven’t analyzed all the data yet, but it seems clear to me, the people who were successful had at least a basic understanding of business principles.”

Stephanie’s experience last summer has strengthened her desire to make the world a better place. “There is so much need in the world. … I am absolutely convinced I can make change.”

To that end, “I intend to go to graduate school to study development economics. … Poverty is a cause that is very close to my heart. … It is my goal to dedicate my career to finding and improving tools for reducing poverty.”